It's that time again. The 2007 College Football Blogger Awards are back thanks to the hard work of T. Kyle King, Orson, Brian, and Joel. Last year it was so much goddamn fun, they decided to do it again. In case you're interested, the winners from Year 1 can be found in CFBA Trophy Case. Sadly, your humble author wasn't even nominated last year. (But you can change that! Read on.)

The rules this year are a little different from last year's. As the awards are a year older, they most grow and change with the times. I will let Dawg Sports do the splainin':

* C.F.B.A. nominations begin today in every category.
* Orson will lay out the nomination procedure at his site later this morning.
* Nominations are open to everyone, both blogger and reader alike.
* The period from which postings may be nominated runs from roughly the second week of January 2007 through the first week of January 2008, or approximately from one national championship game to the next.
* Nominations will remain open through next Sunday night.

Any bloggers who are reading this are strongly encouraged to link to Joel's announcement and Orson's forthcoming follow-up posting. We want to spread the word throughout the intercollegiate athletics blogosphere, so that the best blogs will receive their deserved recognition, irrespective of whether they are wildly popular or little known outside certain devotees. Finally, a blogger cannot nominate his own material.

One thing Kyle left out, I'm not nominating the big dogs that won last year. One of the reasons the CFBA was developed was to bring recognition to sites and writers that usually don't get the credit or traffic they so richly deserve. If we awarded these things every year based on everyone's first stops during the day, T. Kyle King, Orson, Brian, BON, and SMQ would win everything, every year. So, as a general rule, unless something they did is so far above and beyond what everyone has done, please consider them an honorary nominee and winner.

A new feature this year is bringing you, the reader, into the equation. Nominations are open to everyone blogger, commenter, or presidential candidate alike. Anyone can pick something they like and submit it on MGoBlog's tube of Nomination Interwebs. So please, go there early and often and vote for your favorite (cough, cough...me!... cough, cough) sites, posts and photoshops of the year.

Here are the categories:

Because of the shear volume of awards to nominate, I'm going to break this down over the next few days. I've picked out my nominees, just writing the copy for them takes a little while when you're slammed at work and have a wife who's got the flu. So, all in due time.

Take a look at the categories and feel free to comment on my choices, suggest someone new, or nominate someone yourself!

On to the Nominations!

Best New Blog - If anyone other than Black Heart Gold Pants wins this award I'm declaring an initfada on the Committee (Brian Cook from MGoBlog, T. Kyle King from Dawg Sports, Joel of Rocky Top Talk, Peter Bean of Burnt Orange Nation, and Orson at EDSBS). With no disrespect to the other fine sites that have popped up this year (Lake the Posts, Autumn Thunder, Paging Jim Shikenjanski, et al.) Jebus, Oops Pow Surprise and Hawkeye State have managed to produce one of the funniest, most relevant new sites in the college football blogosphere. When they're not getting linked by Deadspin or pissing off MgoBlog, they're going all Goulet on your ass.

My hat's off to you guys. Awesome work.

In Honor of this Tongue Bathing of BHGP, I present you with a picture J Lehman,
who reminds you any awesomeness is relative to his own.

Best Community - Well, Peter can't win it this year, so I'm nominating MGoBlog for this year's honor. Brian's comment sections often eclipse my traffic for the day. It's insane. As are most of the posters. I keed, I keed.

Best Writing - Unfortunately my favorite site on the interwebs has been dormant for most of the season. I said it last year and I'll say it again, Johnny's work at RBUAS was and is the gold standard for writing on the internet. It's a crime his schedule didn't allow for more time to post. Most people would take it as a snub that I'm gushing over a site that's been dormant for so long, except I know the guy I'm nominating feels the same way.

With that said, the best prose currently and consistently on the web is posted at Dawg Sports. Kyle sets the standard not just for quality, but for quantity. As a fellow attorney I have no idea how he manages to write so much, so well and still have time for the little things, like sleep and family. I'm not going to link to a specific post simply because I don't have to. You can go to Dawg Sports at any time and find an excellent article Kyle has penned. Hence, the nomination. 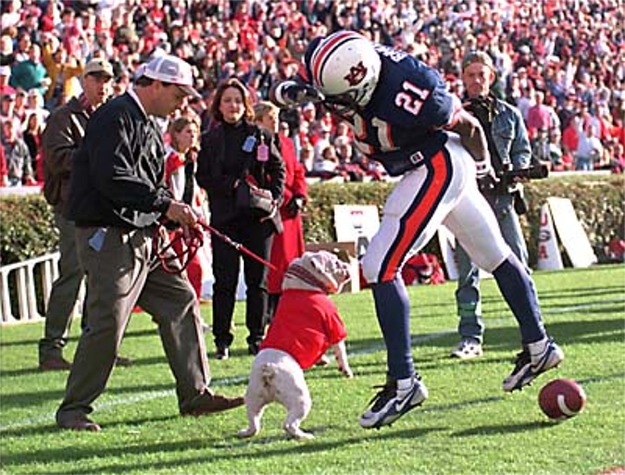 Best Post - I know this isn't supposed to be one long hand job for Orson, but the Who's Next with Tom Brady v. Galactus was one of the funniest things I have ever read. Period. When I read this I peed a little. Just a little. Flowmax is helping me with that, but you get the point. Please let me know if I missed something else. But this one stood out.

Damn you Swindle! Those were new pants!

Funniest Blog - Taking Orson completely out of the equation, there are still a plethora of excellent sites that constantly put up hysterical posts. Before I get to my nominee I have to note the great work Hey Jenny Slater, Autumn Thunder and Black Heart Gold Pants put out. I check every one of these sites every day for a laugh, and they always deliver.

However, the funniest, most consistent site on the web is MZone. No matter whom they're mocking, they're doing it right. To their credit Yost and Benny take as many shots at their alma mater as they do at Ohio State and the rest of the world. Go there. Read. Laugh. Thank me later.