A little hiccup against a good UConn team isn't enough to knock them out of the top spot. The two losses are to quality teams, plus, they haven't lost to Iowa. Yet. 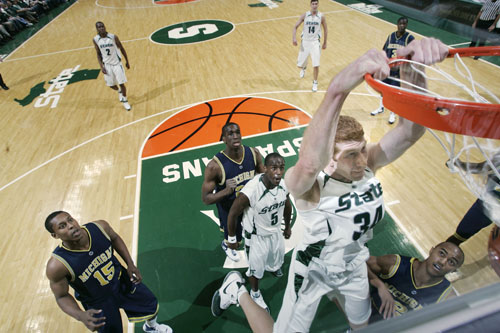 Dunked on by a gumpy looking white boy? Yeah. It's that bad in Ann Arbor.

Tempted to drop them a peg, but their win over Texas in Austin keeps them above...

I really like this team. Painter is getting the absolute most out of his players right now and they're simply outworking everyone. Darkhorse in the Big Ten tourney.

Still young. Still better than half the teams in the league. Lose three in a row? No biggie. Reel off two straight with PSU, Iowa, and Michigan on the dance card next. They should all write thank you cards to the big ten for their schedule.

Sorry. These are Peter O'Toole's Thank You cards. But you get the picture.

Rough stretch for the Varmint Cong. Three straight losses. However they catch a break and get hapless Michigan next. They'd better be careful though. Minnesota isn't exactly shooting the  lights out and Michigan's bound to upset someone. Right?

Three wins in the Big Ten. They're a long shot to break even in conference play, but stranger things have happened. Seven of their last ten games are winnable, and include Michigan, Penn State, Northwestern (twice), Illinois (twice), and Minnesota. Lickliter deserves coach of the year consideration if he gets this team into the post season.

Tears of Sadness over Basketball Season or Tears of Joy that Weber Will Soon Be Gone?

In free fall with Claxton's injury. Lost by 20 to the Hawkeyes.

This team is awful. They try hard, but their awful. Right now, I blame the coach for that.