Why I'm Rooting For Ohio State

Share All sharing options for: Why I'm Rooting For Ohio State

When the national championship game comes on tonight, I've got it all planned. I've got my spot on the couch all picked out. You've probably got the same spot. You know, the spot on the couch so ingrained with your ass print that after a season of football you're the only person who can sit there comfortably. I've got the fridge stocked. The pizza man bribed. The phone turned off and the internets ready. I'm all set.

Michigan may not be in this one, but I've got a rooting interest anyway. And it's not what you'd expect. After three and a half months of some of the craziest and most inexplicable football I've ever seen, I'll spend Monday night doing something equally crazy.

I'll be rooting for Ohio State.

Weird I know. But there are reasons. Good ones.

First, the Big Ten as a whole needs this win. Currently standing at 3-3 in the 2007-2008 bowl season, the Big Ten is still smarting from last year's dismal bowl showing which not only gave the appearance of a conference in decline but hyperinflated the perception that the conference is full of a bunch slow behemoths more capable of decimating an Old Country Buffet than running to the side line to side line.

Not the only place where Big Ten athletes dominate.

Ohio State has won the Big Ten outright two straight years and is the cream of the Big Ten crop right now. Like it or not, they represent the conference the way USC does the PAC 10. People judge the conference by the performance of the conference leader. Along those lines, OSU is going to face the SEC's champion for the second straight year in the national championship game. The stakes here are higher than last year's. The 2007 blow out loss was responsible for all the lazy-ass sports writing proclaiming the end of the Big Ten and the beginning of a new world SEC order. Drawing a second SEC team gives the Big Ten a chance to snuff this crap out, or simply add to it.

Regardless of Michigan's win over Florida, another OSU loss in the National Championship game to an SEC school will simply reignite the "SEC OWNZOERSS TEH BIG TEN aANDZ DA WURLD!" discussion. And I just don't want to deal with that topic again. Especially when it was proven to be bullshit. 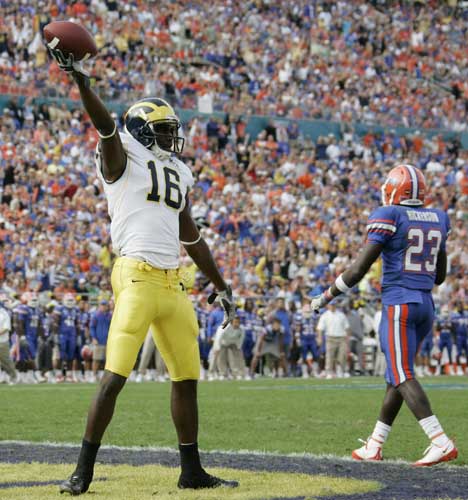 Fast Enough For You?

Second, and as a Michigan fan I'm not afraid to admit this, there are enough tOSU fans and grads I've become friends with to be happy for them and to root for their team in this circumstance. Don't get me wrong. The OSU game this year was filled with enough degenerate Buckeye fans to fill the Great Salt Lake. However, I'm sure the same can be said by the OSU faithful when Michigan comes calling. I've personally witnessed some Michigan fan behavior that is deplorable. So I'm not going to judge the entire fan base by the actions of a few morons as I'd prefer my fan base not be judged that way.

Additionally, there are several OSU sites I check on a regular basis, not just to spy on the enemy, but because their content is so damn good. As much as I enjoy checking out the fine LSU blog And the Valley Shook, I've been reading Around The Oval, The O Zone, Men of the Scarlet and Gray, Eleven Warriors, and Buckeye Commentary for too long not to appreciate the great work they do. So, based on my friendships and my appreciation for the work the Buckeye sites do, I'm willing to root for OSU.

Third, the enemy of my enemy is not necessarily my friend. Don't get me wrong, I take joy in OSU losing to Purdue or Illinois or Northwestern, but I'm sure as shit not going to take an active rooting interest in their opponents.

Ha Ha... Alright, it's over, what's on Comedy Central?

Fourth, fuck it, if Michigan's going to lose to one national champion, why not lose to two in the same year? History is history.

Say what you want, I don't feel so bad about this one anymore.

Fifth, Les Miles irritates me. Prior to this season no one liked him. He was a loud mouthed jackass that was calling everyone and their mother out for the sake of... I'm not really sure why.

Just to borrow from Dawg Sports:

Les Miles's recent remarks are being panned throughout the blogosphere, and nowhere more so than at The Band Is Out On The Field, where commenter Seth gave voice to his West Coast bias. It's all right, Seth; we think he's a dufus, too.

Now I know Les is a Michigan man. I know he played for Bo. But I can't help but think he gave Michigan the shaft. I realize I'm in the minority in this view, but I'll stand by it. He's an erratic coach with arguably more balls than brains. You want proof? Here's your fucking proof!
HT: EDSBS and LSUFreek of TigerDroppings.com.

During his coaching career he's developed a well earned reputation as the coach who calls six or seven stupid plays every year that cost his national championship caliber teams at least two wins. Can I really root for a coach that knew Darren McFadden was the only friggin' player on Arkansas and still allowed him to run for 206 yards? Especially when Auburn, devoid of offense Auburn, the Auburn who continually tried to find ways to get McFadden back on the field, still held him to 43 yards. Les may have ties to Michigan, but I can't root for him.

Seventh, in a season that's made no sense rooting for your enemy is the only thing that seems to make sense. Wait. What?

So that's it. Tonight when the game comes on, I'm a buckeye fan. For one game, anyway.