Michigan Football 2008: A Michigan Penn State Q & A with There Is No Name On My Jersey

Share All sharing options for: Michigan Football 2008: A Michigan Penn State Q & A with There Is No Name On My Jersey

With the Penn State game around the corner and the bad blood brewing between the fanbases, Jim over at There Is No Name On My Jersey and I got to thinkin'. Why can't we all just get along? We realized that there are lots of reasons, mostly you, the reader, that we can't so we sadi the hell with it and decided to do a question and answer on the game rather solve world hunger or erradicate small pox. If you want real analysis, I'll have something up later. But for now, enjoy a little snark. You can check out my answers over at There Is No Name On My Jersey in a little while.

Maize n Brew: You're afraid of this game? Seriously? Why? We suck this year.

TINNOMJ: Yes, I am seriously afraid of this game. is rebuilding and have had their struggles this year. However, comes to with two very powerful factors on their side:

1. History, I think I was 16 the last time beat the Wolverines. The 2005 game just robbed me of all my bravado when it comes to .

2. You have nothing left to lose. This isn't a rivalry game for and your season has not gone as well as you had hoped. This team might just come out loose and fired up.

TINNOMJ: You know, this would be a much easier question if it were about , couldn't we all just rattle of a list of hundreds of those jerks?

I'd have to say: Chad Henne. Henne was in the same recruiting class as Morelli and Henne was actually a good football player. Henne presided over 4 years of besting PSU including the 2005 and 2006 losses which were both particularly memorable in their own way. 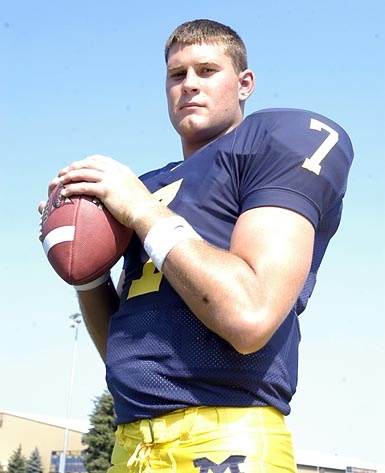 Chad looks down on you, and feels no remorse. via media.collegepublisher.com

Maize n Brew:  Please explain to me why it's called the "Spread HD". Is it "High Definition?" Is it "Hello Dave?" Is it for "Herpes, Deluxe!" What the hell is the HD for and why can't you just call it running the spread like everyone else?

Maize n Brew: Has this season bought Jay Pa some credibility? A season ago, well, honestly for the last few seasons, PSU fans have been ready to run him out of town on a rail. Are people still calling for his head or is he now persona grata?

TINNOMJ: I think Jay is gaining credibility by the second. Through seven games the 2008 squad has a better offense than the 2005 Penn State team and is only averaging 5 points less per game than the 1994 squad(1994: 50.2/game, 2008: 45.2/game). When you put this team into that kind of perspective you are talking about one of the best offensive teams has EVER had.

At the very least, the success of this season has taken the pressure off of Jay and bought him more time. I'll be honest, if continues on this pace through next season, somebody is going to give Jay a head coaching opportunity. And he'll deserve it.

Maize n Brew:  What's the biggest non-Morrelli difference in this team? You could've put a dyslexic midget in a clown suit at quarterback last year and probably had the same record. So if you can't pick , who or what do you point to for the reason PSU is #3? 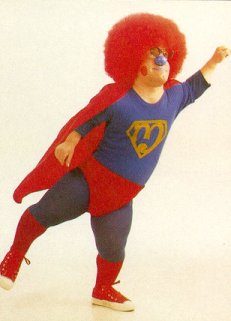 TINNOMJ: Evan Royster. He got a little playing time last year but this year he has really blossomed into a wonderful RB. He is averaging around 7 yds/carry and he is a major reason there is so much room for the WRs to operate in the passing game.

Maize n Brew: If wins, you will…

TINNOMJ: Celebrate! has owned PSU for too long for me to not feel great about a victory. I may even have a brew or two.

TINNOMJ: Drink to forget. Then spend the rest of the weekend sulking.