A Flicker of Light at the End of a Dark Tunnel: Michigan Football Shows Signs of Life in Loss to Penn State

Share All sharing options for: A Flicker of Light at the End of a Dark Tunnel: Michigan Football Shows Signs of Life in Loss to Penn State 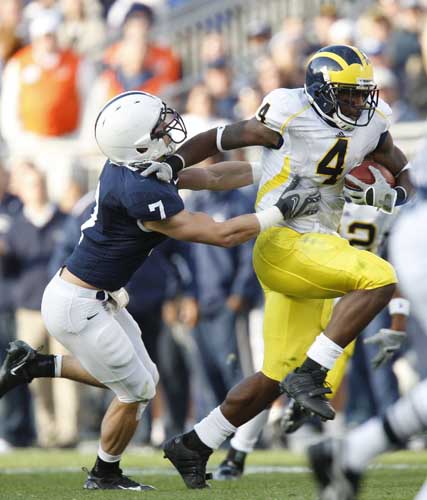 For two fleeting quarters, the 2008 Michigan Football team almost had me believing they could pull out the improbable. Despite all the mistakes this season has witnessed, the blown assignments, the fumbles, the missed tackles; Michigan went into the half at Happy Valley leading the #3 ranked team in the country 17-14.

In my gut I knew the lead wouldn't last. Michigan had shown signs of turtling its offense and Penn State's confusion at Michigan's blitz packages seemed to have worn off. The things that had haunted the team all year (dumb penalties, poor defensive play calling on 3rd down) allowed Penn State to score a late touchdown to close their deficit to three points. If Mcihigan had remained up 10 points, maybe I would've gotten my hopes up, but I knew a three point lead had as good a chance of holding up to Penn State's offense as Lehman Brothers did to the sub-prime distaster. It wasn't going to happen.

As the game worn on I found myself yelling at the TV when Michigan missed a sure tackle, blew a coverage, or put Nick Sheridan in the ball game. But, it wasn't becuase I thought Michigan was going to win, but because after seven games I expected this team to show the ability to at least last until the third quarter. And I figured tackling was one of those things football teams actually practiced.

Despite it all, when the final gun sounded, I wasn't mad. I wasn't upset or depressed. In some strange way I was hopeful. For a half, I'd seen what Michigan is capable of and I'd seen a glimpse of what this team will do next year, play winning football.

As I'd predicted, the absence of Steven Threet would spell doom for the Wolverines' chances on Saturday, and an elbow injury proved me right. With Sherridan in the game Penn State put virtually all eleven players in the box and giggled to themselves as Michigan tried hopelessly to run the ball. The results were predictable. Sherridan got sacked in the endzone taking too much time and not being aware enough to get out of the endzone with the pressure came. And with that the tie game was over and the rout was on.

But with Threet in the game, it was a different team. His passes were, for the most part, crisp and on target. He ran well, substanitally better than Sheridan, picking up first downs and critical yardage. He made good decisions. He showed that, dammit, it actually will be his job to lose next sesaon. He showed that Mcihigan is a dangerous team when he is in the ball game. All we can do is hope his arm heals sufficiently that he can prove that come Saturday against Michigan State.

As happy as I was for Threet, it's hard for me to happier for any member of the team than Brandon Minor. Piling up 117 yards, two touchdowns, and a couple of mamoth runs, Minor reminded all of us why he was such a sough after recruit. Prior to the Penn State game, Minor was being treated as a joke, a whipping boy for Michigan's fumble problems. In some ways he was what was being alleged, a mirror of the team, talented but critically mistake prone.

During this last trip to Happy Valley Minor showed he can mirror this team's positive attirbutes too, hitting people rather than being hit. Finishing plays. Wanting it worse than the people trying to stop him. He was everything we expect to see out of a Michigan running back and out of this Michigan team. And I hope people remember that.

Certainly there are negatives to dwell upon, the tackling, the horizontal playcalling from the second quarter on, the insistence of playing a 3 man line when the Defensive line is our strength, the giant steps back taken by both Donovan Warren and Morgan Trent.

Sure I could focus on those, but in a season that looks lost no one needs me to pile on. There are enough positives to help us through the lean times. So why not focus on those? Michigan was soundly beaten by a better team on Saturday. And for that I tip my hat to the Lions' and wish them every success this season. Did Michigan make mistakes that "cost them the game?" Maybe, but so did Penn State. The difference is good teams capitalize on those mistakes, which Penn State certainly did and Michigan did not do enough of.

But these are things you expect from a young team. And especially a youn team in transition. Michigan lost on Saturday, but did some things that give me hope for the future.

And right now that's all I can ask for.