Death is Not an Option: Miserable 2008 Season Not Exclusive to Michigan Football

Share All sharing options for: Death is Not an Option: Miserable 2008 Season Not Exclusive to Michigan Football

For all the gnashing of teeth, hand wringing, cursing, booing, hopelessnes and general unpleasantness of the Michigan fanbase this season, you'd think the University was debating shutting down the program if things didn't improve. Sure, this season's been a train wreck. But it's been a train wreck we all (for the most part) saw coming. If you follow football at all you knew it was goign to be a rough year, even if you didn't want to believe it. No one was picking Michigan any higher than 6th in the conference. Brand new offensive line, running back, tailback, quarterback, new safeties, bad linebackers, etc... This team wasn't a world beater out of the gate and making a bowl was going to be a challenge, even if you thought 8-4 was realistic (not me, preseason 6-6. Which is soooo wrong in hindsight).

The difference between this and the other catastrophic meltdowns in Michigan history is that this one was kind of expected. This is an entirely different team than the one that finished the season last year. New coach. New system. New players. Even the Stadium is gettin' newafied. You expect problems with this kind of turnover.

But would you rather have this, or a season like last year? In 2007 Michigan was a consensus No. 4 in the country, had national title hopes, veterans everywhere, and expectations out the wazzoo. And then, well, we all know what happened. 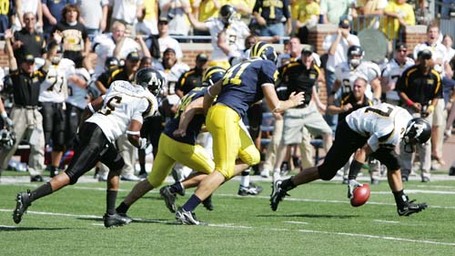 Here's the thing. In a 2008 season where Michigan's gone from being expected to do nothing to, well, expected to do nothing, not a whole lot has changed. Sure the sting of missing a bowl game is tough, but it was a tough shot anyway. What stings worse is being a National Title contender in every sense of the phrase and having the bottom totally fall out from under you. For all that's gone wrong this year in Ann Arbor, I wouldn't trade places with Clemson, Tennessee, or Wisconsin fans for all kimchi in Korea. 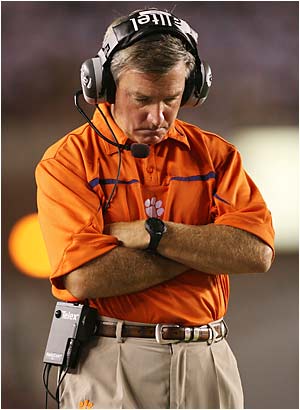 He's looking for the trap door. via 3rdsaturdayinblogtober.files.wordpress.com

In terms of pain, there's nothing that can compare to the unmitigated disaster that's befallen the Clemson Tigers. Things are so bad there that they applied for disaster relief funding and not even FEMA could make it worse. Clemson was ranked 9th in the country coming out of the gates. Veterans everywhere. Two of the most talented backs in the conference, if not all college football. A decent defense. All the pieces were in place for not just an ACC championship, but a legitimate shot to run the table. But instead of an undefeated season, the Tigers got shellacked by Alabama 34-10 in a game that wasn't nearly as close as the score indicates. Clemson's only wins are against the Citadel, South Carolina State (D-1AA), and 2-6 North Carolina State who is giving Michigan a run for the "Good God, You Suck" trophy. Instead of being 7-0 going into the stretch run, they're sitting at 3-4 on a three game losing streak. Hell, it was such a dissappointing season they fired their coach midseason! Making matters worse, the now dismissed Bowden's players couldn't wait to throw dirt on his coffin.

"It's what he deserved," QB Cullen Harper said.

Ouch. All things considered, I'll take 2-6 with one of the best coaches in the country rebuilding my program than firing a coach half way through a tough season where your national championship dreams are gone after a game. 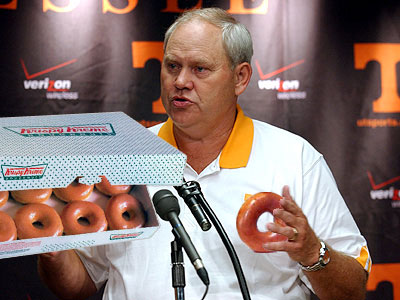 This Has Nothing to do With Anything, I Just Think it's Funny. via rgm.rustytanton.com

Then there's also the curious case of the Tennessee Volunteers. The Vols started the season 18th in the country, had legitimate SEC championship plans, and were at least planning on a New Years Day bowl. Not so much. The wheels came off the bandwagon the first game of the season as the Vols blew a fourth quarter lead with less than a minutes to go, rallied to tie, and then lost it in ovetime. With the departure of former OC David Cutcliffe to Duke, the offense has deteriorated into near nothingness. Worse, the defense is keeping things tight against bad teams but getting hammered by the decent ones. The Vols have lost every game against the ranked opponents they've played and only managed 13 points against Northern Illinois. It's gotten so bad that at 3-5 the head coach, a man who's won a National Championship, has to defend himself and say the rumors of him being forced out the door aren't true. Fortunately for the Vols, the schedule softens considerably from here out, but the Vols could very realistically finish below .500 and miss a bowl game this season. Two more losses are all it takes and are realistic when you consider the OBC, Vanderbilt and Kentucky are still on the docket. So let's add that up. Revered head coach defending himself against getting fired. 18th in the Country to 3-5. Offense nearly as incompetent as Michigan's despite twice the talent. A defense that can't really seem to get it together. And the realistic possibility of staying home for the holidays when you had a legit chance to play for an SEC title. Yeah. I'll stick with my rebuilding year. Unless things turn around quickly at Tennessee, that off season could be ten times worse than anything Michigan experienced with Rodriguez' hiring. 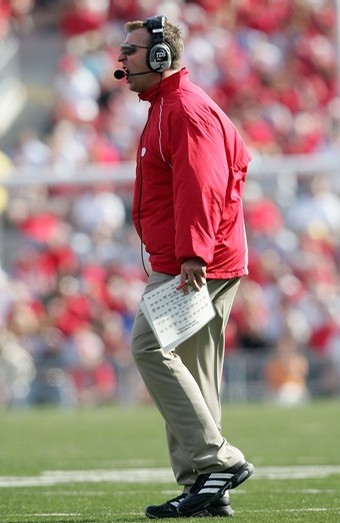 I said stop sucking! via cache.daylife.com

On Wisconsin. Ugh. The Cheese state's ready to curdle with the way this current edition of the Badgers has turned out. Despite a downy soft schedule which includes Akron, Marshall, Iowa, and Michigan, the Bagers are sitting at 4-4. This team was supposed to steamroll opponents and play sturdy defense. Instead, they gave up 27 unanswered to Michgina (2-6 Michigan), just got drilled by Iowa and Penn State, and just got its first Big Ten win against its fifth conference opponent. Yikes. The team can't pass worth a damn, so teams are stacking the line against PJ Hill and preventing the Badgers from running the ball, forcing them to pass, and the vicious cycle churns and churns and churns. What's worse, even when they pass the ball, they can't seem to hold onto it, drops have killed the Badgers all year long. The defense has been a disaster as well. Taking out the non-conf snaky cakes, Wisconsin is 9th in scoring defense and 8th in rushing defense in conference. Notsogood. These guys were ranked 8th in the country at one point, and instead are unranked and just crawled back to .500 despite a veteran team and a coach that everyone (including me) was actually pretty good. It's not out of the question that the Badgers could run the table on their last four games, but a realistic finish is 3-1 and an overall 7-5 season. How's that for a team that started out 13th in the Country and had legitimate Big Ten Title hopes after watching USC eviscerate OSU. Worse, this is a veteran team and a veteran offensive line that can't get it's act together. The defense is slow. There's no quarterback on the roster or in the pipeline that seems like they'll be anything other than a bottom of the Big Ten rock chucker and occassional scrambler. There's not a lot for Wisconsin fans to sit up and say it'll get better. Instead, they're looking at the Alamo Bowl as a best case scenario. And we all know what happens in the Alamo Bowl...

So when you put everything in context, this little rebuilding year ain't so bad. Michigan's got at least two scalps to claim this year and probably will tarnish another team's season along the way. Next year, and especially in 2010, they're going to be pretty good. So there are things to placate us until that time. But for the programs above, there were expectations. There was talent. There were all the things that drive a fanbase to drinking and felonies without any of the "well, it'll be better next year" style vebral prozac to keep them from going crazy.

Yeah this year sucks, but I wouldn't trade places with these guys in a million years. At least you can take solace in that.