Michigan Comes Crashing Back Down To Earth, Loses 20-45 to Illinois

Share All sharing options for: Michigan Comes Crashing Back Down To Earth, Loses 20-45 to Illinois 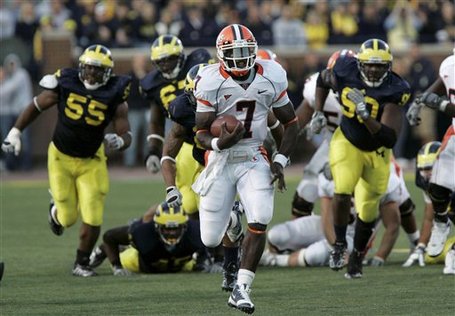 It's not getting into space that'll kill you, it's the re-entry.

A week after Michigan's Football team sent its fan base into orbit with a dramatic come from behind victory, things came crashing back to earth in a giant Illini Orange fireball. Michigan had no answer for either Arrelious Benn or Juice Williams on Saturday and any momentum from the Wisconsin game quickly dissipated as Illinois rolled up 28 unanswered points en route to a 45-20 win over the Wolverines, their first in the Big House since 1999.

But, at least for a quarter, the Wolverines gave us a glimpse of what they can be. For 15 minutes the young Wolverines played inspired football. Passes were crisp. Runs gashed the Illini defense. 14 points dotted the scoreboard for the good guys and the defense looked stout. However, from the second quarter on every warning light on the Michigan board started blinking, offensive systems started to fail, and Juice Williams ran and threw wild over an overmatched and over extended Michigan defense.

Last week, it was apparent that the defense would have to carry this squad until the offensive woke up and/or found itself. It wasn't exclusively a play calling or execution issue as much as it was a confluence of offensive issues that led to Michigan's slow start against Wisconsin. But when Michigan took the field Saturday, those issues seemed resolved. 14 quick points and a drive that resulted in a blocked field goal try seemed to tell us the offense was alive and might actually spot the defense a few minutes of rest and a few points in support. Unfortunately, my optimism after 15 minutes of play was misplaced.

After the Wisconsin game I wrote about my disappointment with Michigan's first half play calling. This week I can make no such complaint. Michigan was aggressive, pushing the ball deep and running the routes you have to throw to be successful. The coaches' faith was placed in the hands of their play makers. Unfortunately, on this day those play makers simply weren't able to deliver.

Michigan couldn't run or throw the ball effectively after the first quarter. Running McGuffie almost exclusively, Michigan found no running room against Illinois' active linebackers and aggressive line. The passing game, which was succesful early on, quickly followed the running game into oblivion. Despite having his best day as a Wolverine statistically, quarterback Steven Threet was at best erractic, alternating excellent throws with confusing decisions and poor mechanics.

The target of the majority of these throws was the diminutive Martaveous Odoms. While Odoms statistically led the Wolverines in receiveing, he too had a mixed bag of a day. Odoms turned himself around on a sure touchdown pass and alternated great catches with the wrong route or a dropped ball.

Through three quarters I charted 13 passes to Odoms. Unless you're throwing to a Senior Braylon Edwards, AC, or Mannigham against Notre Dame, that's way too many throws to an unproven freshman receiver. If there was a failure on the part of the coaching staff offensively, it was the overt and obvious focus on one player and the failure to get Greg Matthews or Kevin Koger more involved. But then again it's hard to be too hard on them when just about every one of Michigan's receivers is hurt or playing hurt. And it's even harder when your quarterback is spending the second half on the ground.

The Offensive Line also had a day to forget. Running lanes were hard to come by. Blitz pickups were spotty. Protection in general was questionable. Michigan's Running Backs totalled a paltry 90 yards total rushing. Sweep after sweep met the waiting arms of an Illini linebacker and Michigan couldn't have put a hole in the Illini defensive front with a buzz saw. Nothing worked.

On Defense the Wolverines mirrored their quarterback, alternating moments of brilliance with crushing mistakes, the majority of which occurred in pass coverage. Unlike Wisconsin, which lacks a vertical passing threat, Illinois possessed the ability to stretch the field and did so repeatedly. Using play action over and over again to draw up safeties Stevie Brown and/or Charles Stewart, Illini torched the Wolverine secondary in a manner reminisient of the loss to Notre Dame earlier this season. Simple coverages were blown. No one seemed to know where Illinois' most dangerous receiver, Arrelious Benn, was.

Screen passes went for 57 yard touchdowns. Michigan would bury the pitch man a half second after he made the pitch then grasp helplessly as Illinois picked up 12 yards after the initial hit. First and second down were dead ends, yet third down was a freeway.

It's easy to point to any aspect of the game and find flaws and fault to dish out. But there was something different about this game that makes it different from its predecessors. There are a number of reasons I can't get upset about this loss. First, Illinois was the better team on Saturday. They played better. They defended better. They exploited Michigan's weaknesses and played to their own strengths. That is something to be commended.

Second, and most importantly, this was the type of game I expected to see out of Michigan a couple of times this season. A game where a few things go right, but the majority don't. A game where we show our age, show that we're still a work in progress and remain a bunch of kids learning new systems on both sides of the ball. This wasn't the hopeless, pit of despair feeling I got against Wisconsin during last week's first half. It was different. It was a feeling that if execution was there, we've been in it. If that pass hadn't sailed. If we'd picked up on Illinois' offensive set earlier. If we just had that extra half second. If, if, if... things might have been different.

These are things that come with age and experience. And they will come to the team as the season rolls on. It's impossible for a team like this to stay in orbit too long. They're too young. Too inexperienced. Just a hair too slow to maintain the velocity they need to remain on top of the Big Ten.

This isn't to say they'll never get there. They will. It will just take time. For every successful rocket launch during the 50's and 60's, NASA must've blown up six more on launch pad. This stuff isn't easy. Maybe as fans we've gotten to the point where we believe the difficult is routine, even a given, when in fact those things we took for granted are more difficult than we'd ever imagined.

Last week Michigan showed us they were capable reaching the Big Ten stratosphere. This week they showed us they're still kids who haven't learned how to deal with success, let alone stay in that orbit. And so it's up to the coaching staff to pick up the pieces from this humbling crash back to earth, learn what they can from it, and build a better rocket out of the parts they have.

It's a difficult process. One that won't be completed quickly and one that will envetiably result in a few more launch pad explosions before the Wolverines finally take flight. But even when that happens it'll be up to the coaches to remind their players that once you're up there your work isn't complete.

Because when you reach that height, it's a long, very hot way to fall.