Celebratory Brews, Wags of the Finger, and All Things Inbetween: Evaluating Michigan Football's Performance Against Illinois

Share All sharing options for: Celebratory Brews, Wags of the Finger, and All Things Inbetween: Evaluating Michigan Football's Performance Against Illinois

(Ed. Note - No. I can't spell. And yes. I did change the originally misspelled "Evaluating" to "Evaluating." kthnxbi!)

Sure, it's Thursday, time to move on. But Michigan Football's performance on Saturday left plenty of things to discuss. Like what, if anything, positive we can take away from the game and the things we need to work on. With that in mind I dish out a few Celebratory Brews and a boatload of Wags of my Finger and wonder out loud just how rough this season is going to be.

Offensive Play Calling - Despite Brian's excellent breakdown of the failures of the Zone Read against Illinois' defense, I thought the play calling was aggressive and relatively well suited to the players. Sure Threet's throws weren't the best from time to time and offensive execution wasn't great by any means, but the Coaches put the offense in a position to be successful. The players just couldn't make it work against the Illini.

Martavious Odoms' Kick Off Returns - The fourth quarter fumble be damned, Odoms was awesome in the return game. Michigan started every drive north of the 25 yard line and usually around the 30 or better. On seven returns he averaged 26 yards a return and made something out of Michigan's horrific return blocking. 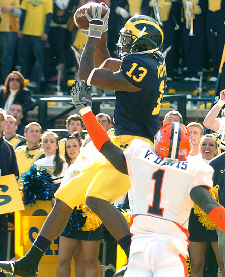 Zoltan Mesko - Keeps doing his job. A 47 yard average, including a 55 yarder, 3 downed inside the 20. Not too shaby. The Space Emperor is living up to his name.

Wags of the Finger!

Good God, where to start?

The Defensive Secondary - There is only one other non-USC, non-bowl related pasting of Michigan's secondary that is even remotely in this category, and that is Dennis Dixon's aerial dismanteling of the Wolverines last year. During that game the Wolverines surrendered passing touchdowns of 85, 61, and 46 yards, and Dixon threw for 293 yards.

During the Illinois game Michigan gave up passing plays of 46, 57, and 77 yards, with the last two resulting in touchdowns. Illinois' receivers ran free, as though they were happy gazels in a lion free tundra. Nothing went right. Tackles were whiffed on, angles were poor, decision making was terrible. Everyone in the defensive secondary was bad. You can't point to a single guy and say, "well, he was okay." No. He wasn't. He was bad too. Five games into the season the fact that the secondary's problems in recognizing the difference between a run and a pass play do not bode well for Michigan's chances against any remotely competent quarterback.

Fumbles - Someone please make this nightmare stop. Karma? The WLA has a point. For four years Mike Hart didn't fumble once, unless it was during a bowl game. Now Karma has come around to bite us in the ass. Hart's two fumbles were just a warning of the flood that was to come. Michigan leads the Big Ten in fumbles and fumbles lost. Actually, they lead the COUNTRY in fumbles lost, tied with Wyoming, and Army at 117th in football protection. Woo! We're number #1(17)!

No one besides McGuffie can keep from fumbling. Brandon Minor can't hold onto the damn ball. If he could, he'd be an integral part of this offense. To pilfer from MGoBlog (comment #19) Commenter Other Chris, the fumble percentages look like this:

Just to make you a little more nauseous, Threet has eight fumbles (losing four of them). I maintain the back breaking fumble against Illinois was Shaw's fault, so that total should be 7/3, but it's still horrific. Worse, at least two of those fumbles were unforced "the ball slipped out of my hand" fumbles inside the red zone. Seriously. WTF!? Worse, the fumblitis is getting to people that aren't even playing that much. If you want to count Mike Shaw's touches (4 rushes, 2 KOR, 4 receptions) he's got two fumbles for a 20% fumble rate, per touch. The ball may be coated in tephlon, this is just one of those freak things, it could also be a coaching issue. My money's on all three.

At a certain point you just throw your hands up and shake you head in disbelief for a final time. Maybe this will get better, but it probably won't and it'll be an achilles heel that will more likely than not keep Michigan out of a bowl game this year. These are, after all, kids. I'm hopeful that with age and experience this trend will go down and ball security will improve, but I'm not expecting it any more than I expect a puppy not to piss on my carpet. It's going to happen. I know it. The puppy knows it. There ain't nothing I can do about it. 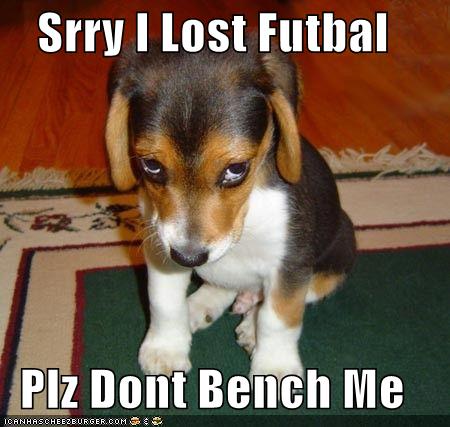 Refereeing - This is getting comical. And not Lewis Black or Chris Rock funny comical. Carrot Top comical. Comical to the point you want to jump off the balcony to end your suffering comical. Referees directly infront of a play aren't making proper calls while back judges are flinging flags on plays they can barely see. This is hitting Sun Belt levels of quality. The officiating must be overhauled immediately, because even though the officiating didn't cost Michigan this particular game, it's going to cost a front running Big Ten team a game in the near future. No matter what game I'm watching the Referees are missing obvious calls while calling the borderline and not even close kind of penalties. This has to stop. Otherwise the repuation of a Conference in decline continue to grow in validity because of people that aren't even playing the game. And that's even more nauseating than Michigan's fumble problems.

Everything Else - I could wag my finger all day long, but I'd type until my fingers were worn down to the bone. The errant throws. The lack of pressure. The linebackers' horrific, horrific play. The Offensive line being incapable of blocking in the second half. Everything. Everything in the world and time up till now. Everything. For Shame!

All Things In Between

Noise - For what its worth, the construction around Michigan Stadium is making the Stadium a lot louder. The last two games have been the loudest I've ever heard in the Big House. For all the criticism bloggers and the media have leveled on the fans, for the most part, people have been incredibly supportive of what is a bad football team. And those same fans were yellin', screamin' and clappin' as loud as they can first through fourth down during the first three and a half quarters. In my section, which is full of old folks and alumni, no one sat down and everyone was yellin. The House is getting louder, and as this team improves, it's going to be a huge advantage.

Illinois Fans - For the most part, you were nice people. A couple of you were schmucks, but for the most part nice enough. I wish your football team luck with the remainder of your schedule. You beat us in our house and I tip my cap to you.

Certain Illinois Fans - We need to talk. Mostly about your shirt selection. Now I realize you're in college and the idea that you can curse and swear and wear whatever you want is new to you, and the fact that you can do all of those things on a T-shirt makes your insides all tingly, but grow up. Maybe it's not exclusive to Illinois fans, but the highest percentage of visiting fans to wear the oh so clever "Muck Fichigan" t-shirts are the Illini. Muck Fichigan. He he. It's like I'm swearing, but I'm not. Because the letters are swapped. It's da bomb brah.

Yeah. Ha ha. You're a dumbass. If you own or wear a shirt like that (this includes anyone with a "-uck [School]" t-shirt of any kind), I'll say it again so I'm crystal clear on this point. You're a dumbass. You can think you're clever, but those shirts and signs have been around for decades and they were stupid then too. The same with the "Ann Arbor is a Whore" t-shirt. Attention, dumbass, they've been circulating since the 60's. If you're wearing either of these shirts in public, you're not only a dumbass but you're an unoriginal dumbass. Come up with something new. I beg of you. Please prove to me there something else to do in Chambana than drink grain alcohol and pledge the Greek system.