The Triumph of Hope Over Experience: Michigan Football Dominates Minnesota for 29-6 Win

Share All sharing options for: The Triumph of Hope Over Experience: Michigan Football Dominates Minnesota for 29-6 Win 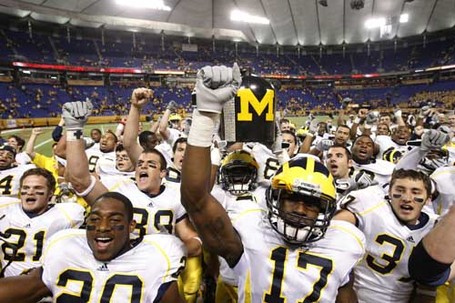 During law school I clerked for a wonderful human being, who just happened to be a lawyer. He'd been as successful as you could be professionally. Argued before the Supreme Court. Made gobs and gobs of money. Was well liked by his colleagues and commanded a room without intentionally trying to comandeer it. However, if there was one place he'd been a tad unlucky, it was in love. Married and divorced a few times, and at the time I met him, happy to never walk down that aisle again.

After law school I took him and his associate, another good friend to lunch to express my graditude for all they had taught me and causually mentioned that my law school sweetheart and I were getting married. The associate smiled and quickly let out a genuine, and totally midwestern, "That's wonderful!" The older lawyer sat there with a big grin on his face and as soon as the associate's voice had faded, let out a hearty, good natured laugh, and bellowed "Ah ha! The triumph of hope over experience!" before shaking my hand and picking up the lunch bill I actually had every intention of paying.

But he was right. I've seen my fair share of marriages end in disaster. But I've also seen plenty that have withstood the test of time. Endured the harships and challenges that break lesser commitments and emerged stronger from that forge of difficulty.

That's one of the reasons Saturday's victory was so rewarding. As Michigan fans, this season has been a bumpy patch in what was otherwise a functional, happy marriage to our football team. The type of rough patch that makes you yell and scream, argue over and question just about everything. We've screamed for blood. Cried over losses. Looked for someone else to blame. Searched for the easy road out. But most of us have stood by, watched it all, and hopefully come out with some perspective. Even if we couldn't see it going into the Metrodome. But once we got there, all that faith and hope were finally rewarded with a convincing 29-6 win, a third victory on the season, and retention of the Little Brown Jug.

Hope comes in strange forms, and this time it came in the form of Nick Sheridan. Lets be honest. He's the last guy anyone though would lead Michigan to a win, but he did. For the first time in his career Sheridan played within himself, limited his mistakes and positioned his teammates to succeed. Frankly, he threw the short screen better than Threet has at any point this season. You can't ask more from the kid. But, anyone annointing him the new starter needs to have their head examined. 67 of his 203 passing yards were on a pair of wounded ducks he was lucky came down in bounds and the rest were on short hitches or wide receiver screens. Sheridan's not going to win us many ball games. But for one glorious Satruday afternoon, he delivered one of them at a time Michigan fans desperately needed it.

Equally surprising was the play of the Michigan defense. After weeks of being dismantled and discombobulated, all of a sudden the defense we thought we'd see at the beginning of the year appeared. Sure it was about five games late, but sometimes the flight gets delayed, so they're arrival was a welcome surprise. Through the first half Minnesota had one first down, negative rushing yards and less that 100 yards of total offense (I want to say it was 46 total yards, but I can't remember). Coverage was solid. Mistakes were minimized and practically non-existent. It was as if an entirely different defense was on the field.

In a manner, it was an entirely different defense. Returning to a set of four down linemen, Michigan pressured Minnesota Quarterback Adam Weber to the point that he was beginning to crystalize. Stevie Brown wasn't victimized once, and actually looked decent in coverage. Michigan went to man coverage with Trent and Warren, allowing the safeties some freedom to move and react. In a surprising move, Brandon Harrison spent most of his playing time as a psuedo-linebacker, hellbent on destroying any attempted screen pass. Most surprising, Michigan tackled. They wrapped people up with both arms and wouldn't let go. There weren't any running backs scurrying out of Ezeh's arms or any receivers somehow running for easy touchdowns or gaining an extra four yards after the initial hit. The coverage was tight, so tight that Trent came up with a game sealing interception.

It was what we expected, what we hoped for all season; a sufficient offensive output matched with outstanding defense. For one game at least, we got to see it. To see what the team is capable of. We got to see Justin Feagin sprint through the line like so many of Rodriguez' quarterbacks over the years (and damn is that kid fast). We saw what a well throw wide receiver screen can do. We saw Mike Shaw blast through the line and Minor continue to prove that injuries and all, he's still our best running back.

I truly was the triumph of hope over experience. Our season has taught us to believe we're going to lose games like Saturday's. It's hammered us for holding out hold in the face of a cold harsh reality. But for one day in the Metrodome, hope triumphed. Never underestimate it.

Hope can raise up even the most jaded, the most experienced among us and make them believe in things they swore never to believe in again. How else can you explain being a Michigan fan this year?

Further, how else can you explain that the old, expereinced lawyer is getting married again?