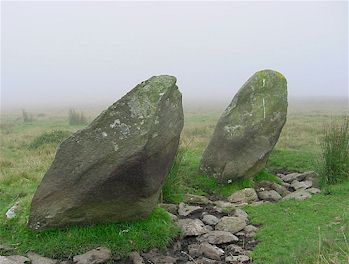 There's a fine line between coaching genius and getting your ass fired. It's just a fact. Those that seem content in their positions don't take chances, they play passively and they wait for other people's mistakes. Sometimes it works. Lloyd Carr for instance. Some people are just batshit crazy and run offenses better suited for the CFL than college football. The Dread Pirate Mike Leach for example.

But the vast majority of college coaches exist somewhere in between. They live in that gray area, taking the odd chance but mostly playing not to make mistakes. The philosophy is simple. He who screws up the least stands a better chance to emerge victorious. But no one ever got a job existing in that gray area. No one ever said in an interview, "We're going to protect the ball at all costs, do nothing exciting or remotely resembling taking a chance with the football. We're going to be boring as toast, but we'll win 7 games a year."

No. They say catchy things like "pro-style attack," "we'll spread 'em out," "aggressive in every aspect," or "four quarters of hell on earth." Everyone starts out that way. Everyone is an innovator. Everyone is youthful and energetic and wants to pick up the tempo and the fan base. But as time and experience wear you down, regardless of who you are, you become the tiniest bit conservative. Chances you took before, you won't take today. Look at Phil Fulmer. Or, alternatively, things get so bad that you take chances you wouldn't take before, on players, schemes, play calling. Look at Ron Prince. You win a National Championship or you beat the heavyweights of your conference and you're a genius. Years later, the chances you took or didn't take, cost you your job. It's college football.

And then there's the case of Kirk Ferentz.

Since 2005 the Iowa Hawkeyes have been somewhat of an afterthought in the Big Ten. Picked to finish high, but somehow always finishing smack in the conference middle. Worse, from 2005 through the 2007 season the Hawkeyes are 0-4 against the Top 10 and 2-7 against the Top 25. And this doesn't include the two losses to Iowa State and bowl a loss to Western Michigan that kept them out of a bowl game.

Over the past few years it's become easier and easier to forget that this man presided over seasons that went 11-2 (Rose Orange Bowl Loss, USC), 10-3 (Outback Bowl Win, Florida), and 10-2 (Citrus Bowl Win, LSU). It's easy to forget that Iowa hadn't won a New Year's Day Bowl since 1959 before Ferentz delivered a shelacking of No. 15 Florida on January 1, 2004.

In many ways the decline of Iowa mirrored Michigan's decline into medicority. Conservative play calling. A decline in recruiting. Pressure to continue winning the big game when Iowa simply couldn't muster it. All those taken chances that made Ferentz such a hot commodity three years earlier weren't being taken anymore. And the chances he was taking, particularly on players, were blowing up in his face.

This is the sort of stuff that gets coaches fired.

I'm not a fan of Kirk Ferentz. I’ve never made a secret of this. I’ve belittled his coaching ability and wondered aloud why he hasn’t been fired yet. All the evidence is there to do it. The arrests. The crappy seasons. 2-7 against the top 25 since 2005. Medicore play. A stoic attitude that is easily compared with contempt for those outside his circle. The play calling designed not to lose rather than to win.

Despite all of this, Ferentz was still the head coach of the Iowa Hawkeyes this past Saturday. And his team was within 30 yards of the endzone, facing 3rd and six, 30 seconds on the clock, and trailing No. 3 ranked team in the country by 2 points. What I would’ve expected out of Ferentz was a passive run up the middle to try and set up a long field goal. Some kind of protect the football, low risk run that would minimize the chance something went wrong. Something a coach clinging to a job would do. Something a guy beaten down by the years, the mistakes, the realities of college football would do. 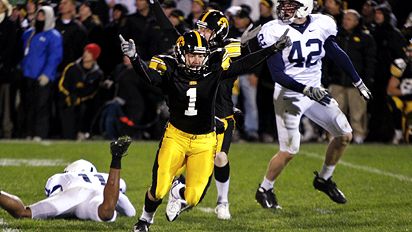 Instead of taking the safe route, the easy route, Ferentz put it all on the line. He let his stones hang out in the wind for all to see on a miserably cold night in Iowa City.

Faking the hand off, Ricky Stanzi rolled to his left on what looked like a designed QB run. Three steps in, Stanzi cocked his arm back and fired a strike to Derrell Johnson-Koulianos, 11 positive yards away on the left sideline. While the throw is only measured north-south, the distance was considerably longer and that ball was in the air a long time. But it got there. All of a sudden a 40 plus yard field goal was transformed into a chip shot game winner that needed only one real run to set the ball in the middle of the field.

It was that play that reminded me that Iowa isn’t that far removed from steamrolling the rest of the Big Ten and the SEC into the pavement. It reminded me that there’s a reason the Iowa faithful are so loyal to him. It reminded me he’s a pretty good coach who has somehow salvaged a season, and is bowl eligible, after an off season that was more like an episode of Cops than a conditioning program.

It reminded me the man’s still got the same pair of boulders hidden away in his trousers that gave Iowa it's first consecutive ten win seasons, and then added another 10 win season on for good measure.

The man's got stones. And that why he’s still at Iowa. 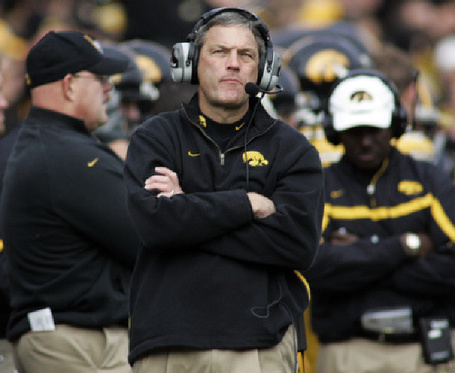