I now know what a win does for a struggling program.  I didn't before because really, Michigan had never struggled, but I get it now.  There is jubilation that leads the fanbase to say things like "I think we can beat Ohio State."  That's all well and good, but remember that this is the same team that lost to Toledo, Purdue, etc.  Things don't just change overnight.  The win was great, but lets keep expectations in check.  After all, if Hope floats, she's most certainly a witch.

Lost in the jubliation that we may not be the worst football team to ever disgrace the game, and lost among the throngs of fans holding out just enough hope that maybe we could beat Ohio State, and maybe this wouldn't be the worst season ever, is the fact that we play Northwestern this weekend without (likely) the aid of our starting quarterback or runningback.  Yikes.  With that in mind, here are some thoughts on what we might see offensively against Northwestern.

Feagin will play (but not start) at QB

We saw Feagin at the helm against Minnesota, and by and large he did pretty well.  He's basically the recepient of the incredibly obvious quarterback draw, but that incredibly obvious draw did manage to go for 30+ yards on one play.  There are two reasons why I'm not enraged at this. 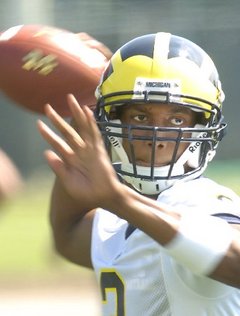 1)  Sheridan/Threet have shown that they are not going to keep the ball.  Threet especially, over the past few games, has been very reluctant to keep the ball even when the read is "keep the ball."  Every time Threet puts it into Minor's belly, it's just wasted time that Minor could be running, because defenses already know that Minor's got it.  So why not eliminate a step?  If the coaching staff really believes that they can be successful with an incredibly obvious zone-read in which the tailback keeps it 99% of the time, then why not just snap it to him?

2)  Feagin, in this case, is the tailback.  Defenses know that he is going to run it, especially after we showed the play to Minnesota.  Northwestern will defenitely know that Feagin is running the ball when he's in.  Except that now, with Feagin, you actually have an option because he can throw it.  Feagin may very well keep it at all times against Northwestern, but I have to believe that eventually they're going to have Feagin at least attempt a homerun pass out of that set.  It may be that they hold off on that until the Ohio State game, I don't know, but the defense will be geared up from the pre-snap to stop that run, and there may just be something there over the top.

McGuffie and Shaw will likely split time at tailback

On the list of  young players who have impressed me the most, Shaw is right up there.  He was kept out previous to these past few games with a lingering injury, but man does he look good now.  I think he provides a "between the tackles" element that is missing with McGuffie. 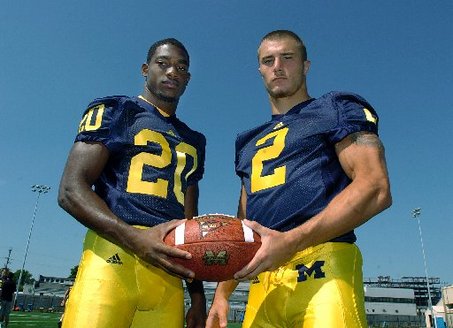 Speaking of McGuffie, I've been very impressed with his hands this season catching the ball downfield.  I expect that he's going to be used out of the backfield or even in the slot at times this weekend.  He's made some catches that would have been tough for a true wide-out to make, let alone a first year tailback.  Watch for this to be exploited by Rodriguez as his playing time increases. 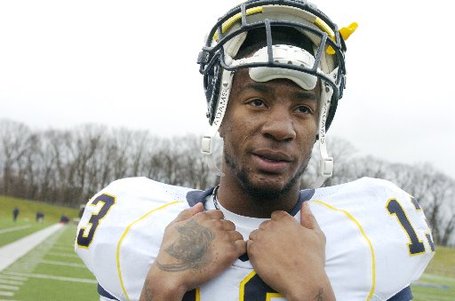 Until the Minnesota game, there was a legitimate argument to be made that Freshman TE Kevin Koger was our most dangerous downfield threat.  I don't think that is the case anymore, as it was clearly an emphasis on the coaching staff's part to go downfield more with the passing attack.  Lost in all the Odoms love is the fact that Mathews and Stonum have actually played very well when they get catchable balls. Additionally, both have shown impressive "YAC" abilities.  I think that they will feature more prominantly in the gameplan against a Northwestern team that will have problems with receivers of this size.

There will be a new wrinkle

Last week it was the screen out of the diamond formation, and the hitch routes run by Matthews and Stonum.  This week there will be something new, I just don't yet know what that will be.  It may be that they've built more around Feagin under center.  It could also be some sort of blocking scheme that I won't pick up on until the UFR.  Something will change.

These are just my sort of feelings on what will be some of the storylines going into the Northwestern game.  Anybody out there feel like they've got something else?  Maybe some things you think we'll see defensively?  Post in the comments, and we'll get a discussion going.  Look for a more stats-ish preview later in the week.