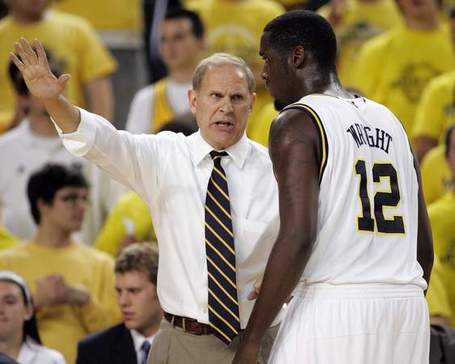 See? No pit stains. via cmsimg.freep.com

Woo. Another 20 point win. While it's hard to get excited about wins over a pair of cupcakes like Northeastern and Whereverthehellthey'refromDiv2 State, last year Michigan would've split these two games. So progress is progress. Especially when you consider the fact Manny Harris was two points from a triple double and DeShawn Sims put in 20 points.

Sure the season is young but there are little things to get excited about, like the fact Michigan can hit its free throws instead of leaving points on the charity stripe. Another "Woo!" is Michigan's sudden ability to get points in the paint and not rely on the three ball as Michigan took just 14 threes. And by "just" I mean "just" in the context of Beilein's "50 Threes is a good day" system.

Michigan gets a week off before squaring off with UCLA in the semifinals of the 2008 2K Sports Classic benefiting Coaches vs. Cancer. Unfortunately for Michgian, the game will be played on UCLA time, meaning 9pm in Madison Square Garden. Last season Michigan was crushed by UCLA 69-54 in a game that wasn't nearly as close as the 15 point win indicates.

This year the Bruins have just one freshman, Jrue Holiday, in the starting lineup along with Final Four veterans Collison, Josh Shipp, Alfred Aboya and James Keefe. Don't get your hopes up, the team's ranked No. 4 in both polls for a reason. Our buddy Nestor over at Bruins Nation has the wrap up on the UCLA side if you're interested (and you should be!).

Impending thumping or not, 2-0 ain't a bad way to start a season.