Pestering the Enemy: A Michigan Northwestern Q & A with Lake the Posts

Share All sharing options for: Pestering the Enemy: A Michigan Northwestern Q & A with Lake the Posts

If you're a Michigan fan, raise your hand if you have a clue what's in store for us tomorrow against Northwestern.

Yeah. I thought so.

In an effort to glean a little knowledge on tomorrow's "shouldn't these records be reversed?" showdown, I bothered our good friends at Lake the Posts, the interwebs' most outstanding Northwestern blog, until they capitulated and agreed to do a Q&A. Many thanks to LTP for the outstanding responses. You can check out my reactions over meyah. 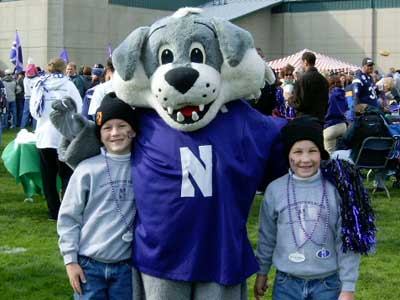 Look who's coming to dinner. via www.bigtennetwork.com

On to the Questioning!

Maize n Brew: Sutton? Out. Conteh? Out. So who's going to carry the mail for you guys on Saturday? Should you be more worried about him than we are?

The Posts: Yes. RB is a major concern for us.  Stephen Simmons made his debut last week against (welcome to the lion's den, Mr. Gladiator). Simmons has been a decent KOR specialist for us, but going from third string to starter was a little troubling for Cats' fans.  We've been extremely conservative on the ground as a result. We've since moved freshman WR/KOR man Jeravin Matthews into the back-up slot.  The real loss in all of this is the receiving ability of both Sutton and Conteh. Heading into last week's game against (which included Sutton's DNP vs ) Sutton was within 20 rec yards of both OSU receivers. His ability to be a receiving threat is what makes our offense tick.

Maize n Brew: Speaking of health, is CJ Bacher really ready to start on Saturday? What's the difference between he and Franz, er, Mike Kafka? It seems like Kafka's, statistically, the better quarterback. What gives?

The Posts: CJ has been a major disappointment this season.  With a new OC, Mick McCall and a slew of seniors at WR, Cats fans expected to see an Adam Weber like improvement in the TD:INT ratio.  No deal.  CJ continues to make mistakes, particularly in opponent's territory by forcing throws he should not.  The CJ-o-meter stat is all about the 1 INT.  If he has 1 or less he's essentially perfect as a starter. If he has 2 or more we lose.

Kafka is a deceptively fast running QB.  CJ is not, but still picks up yardage on the ground. Kafka is having trouble it appears, checking off receivers.  He made a brilliant TD pass in his first drive against MN, but the coaches have been very conservative on his passing. Personally it kills me.  If it is 3rd and long we concede with Kafka and run a QB draw. Every time.  He simply is a tough tackle, but we get away from the pass with him and if we get behind we get in big trouble with Mike.  I do expect CJ to start, but given the conditions, and no RB threat, I expect to see Kafka quite a bit.

Maize n Brew: I was surprised to see how stout the Northwestern rush defense rankings were. Even so, the Cats gave up 159 to Shonn Greene, Ringer went for 124, and Beanie went for 140. Not to be condescending, seriously, but are the numbers artificially inflated or are the front 7 actually pretty good?

The Posts: I really don't know. The front seven is indeed good, but getting thinner. Consider depth is always our challenge and we've lost one of our DEs (Vince Browne), our middle LB (Arrington), and a DB (Justan Vaughan) for the season.  Our pass rush is fantastic by NU standards and the play calling is aggressive. We still cough up the big play.  Beanie Wells was held in relative check last week, and then we had him dead stopped for a 2-yard loss, but somehow John Gill let him escape the grasp for a 55-yard TD.  Ringer busted one huge run. Shonn Greene is simply phenomenal and ate us for lunch until Brad Phillips leveled him and literally knocked him out of the game.  We get great pressure from the ends but are weak up the middle in the pass rush.  Our secondary is suspect and inconsistent.

Maize n Brew: How are Cats fans dealing with all the success? Judging by your recent ain't so feared no more post, I get the feeling you guys are seeing a pretty bright future. How do you see the rest of the season and bowl game playing out?

The Posts: I guess it is all relative. We've only had one season with less than 6 wins than 2003 and that was Fitz' first year when Walk died 7 weeks before the first game.  The bar of expectations has been raised this decade to be anything less than 6-6 is unacceptable.  This season has no karma to it other than .  It has been relatively ho-hum as we seem to get buzz kill losses when we gain momentum. Had we won at (UGH!) we'd be pretty euphoric with a 10-win season dream very much alive.  Cats fans are reserving full euphoria until the outcome of tomorrow and next week are in the book.  Two wins and we'd be ecstatic.  A split, which I think is likely and the season will be exactly what I and most predicted. Two losses and it will be a major disappointment.

Winning a bowl game is the final hump for us to get over in NU fans' minds as it relates to the dark ages stigma. We've been to five bowls since 1995 (95, 96, 00, 03, 05) and have gone 0-5.  The emphasis all year has been on winning a bowl game. I fear drawing a Big 12 opponent though!  Fitz is definitely upgrading the talent and we've landed some true blue chips in the area which is rare for us.  Overall the sentiment is very positive for the program, sans attendance, as fans are patient with Fitz, who remember, is only 33. Our new AD gets it and we're expecting great changes and great things with Jim Phillips at the helm.