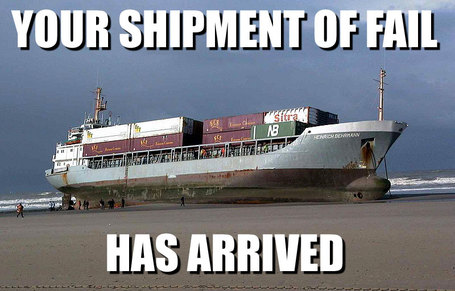 Seasons like these make you wish for a lot of things. I wish we could pass the ball effectively. I wish the defense would stop making back breaking mistakes in pass coverage. I wish Steven Threet would stop getting injured. I wish I could stop writing that things will get better even though they've gotten worse. I wish I had photoshop so I could stencil on a giant block M onto that freighter full of fail.

It seems that the old parable that good things come to those who wait was not a fan. And judging by this college football season it appears only that he was a Red Raider or Bama fan. A full season has basically come and gone and is basically the same team we saw that first half against . Offensively inept, defensively suspect, and searching for something, anything, to hang its season on. We've waited a whole season and next to nothing has come our way other than beatdowns and frustrating losses. Maybe the lesson is we're going to have to wait a lot longer than just 11 games. Maybe our untempered expectations need to finally be culled. Maybe we need to look a little more closely at the disastrous seasons, ney decades, experienced by Notre Dame, Bama, USC, , and just about every other college football program. Patience will have to be learned, expectations diminished, hope stocked up on and stored away in a 3-9 proof basement shelter. Good things will come to those who wait. We just have to look to the future.

With that in mind many of us have already turned our focus to next year, and the truly despondent are looking at 2010 and 2011 for hope that will retake its rightful place in the football hierarchy. Everyone seems to hope the metaphor above is solely an indictment of the season of unending pain we're six days from completing. It'll be dead and buried soon, we say, so let’s leave it at that. We're looking to the future believing that calmer seas will allow 2009, 2010 and all future shipments of hope arrive unspoiled in rather than washed up on .

But being simple beings we require deeper explanations. Rationally and irrationally we expected better than 3-9 or the improbable 4-8. Though the majority of the fanbase accepts this season for the recruiting, youth, and transition season disaster it is, to blindly accept it as inevitable does no one any good. How can you learn from seasons like this if you don’t look at them with a critical eye? How can we pile criticism of other programs (cough… Notre Dame… cough) if we’re not willing to do the same to ourselves?

The truth is the level of fail in 2008 goes beyond a simple lost season. The picture above could also easily be a metaphor for the last few recruiting seasons prior to Rodriguez. A metaphor for the blackhole levels of suck at offensive line, safety and linebacker. Or a metaphor for the final delivery of humility that was long overdue for.

What happened against Northwestern is largely irrelevant. While the dates have changed the story remains the same. Circle the correct name and play below:

On ______, 2008, dropped another close game to ______. The offensive was ineffective in the red zone despite (Minor, Shaw, McGuffie, Brown) running for over 100 yards. (Nick Sheridan, Steven Threet) looked lost running Rodriguez’ spread offense. The majority of (Sheridan’s, Threet’s) passes were under thrown or over thrown, and of the passes that found hands only Greg Mathews seemed capable of holding onto the ball. Drops by (Odoms, Stonum, Clemons) killed several drives. managed only (one, two) conversions in the Red Zone and looked out of sorts the entire game.

It’s just like Mad Libs, only replace the laughter with crying.

But good things come to those who wait. They truly do. Look at Vanderbilt, who will go bowling for the first time ever this year. Look at , who has emerged from the ashes of the Louisiana Monroe loss to be the BCS’s #1 team this year. There’s Texas Tech, long an entertaining afterthought in the Big XII that is now arguably the most complete team in the country. Even a cursory glance at the last decade of these programs shows that more often than not that freighter full of Fail washed up on their beaches more than a freighter full of met expectations.

So now fans wait, read, and prepare ourselves for Saturday’s match up with . Sure there are reasons we can win, and those reasons will be explored in depth by this blog. But, honestly, a win is improbable after ’s performance against (fill in the blank). Prior to and after November 22, all of us will take stock of the shipment of Fail that arrived, store it away, and hopefully successfully export it next season.

But there’s always hope that something good will happen. That competency will come to the offensive and defensive backfields for at least one game. Hope that someone will take us too lightly. Hope that the Seniors can leave on a high note.

And, of course, hope that the tide will finally roll in and help us push this metaphor back out to sea.

We can always wish, right?