Share All sharing options for: McGuffie, Chambers to Transfer (maybe) 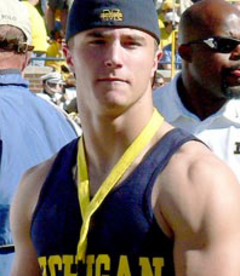 You've undoubtedly heard that McGuffie and LB Artis Chambers have told coaches that they plan to transfer next year.  While the first reaction is panic (go ahead, panic, it's fine) some mode of rationality must be maintained.

1)  Mgoblog has been wrong.  Brian was wrong when he posted that Cox was going to transfer.  He was wrong when he said Ferentz had been dubbed "next."  However, I will say this: despite being unofficial, Brian is aware and is very diligent about the fact that his site is important and does serve a purpose.  He takes that as a responsibility to try to simply give you what he's heard.  He's not in it to start rumors.  If he says that, right now, McGuffie plans to transfer - then that part is at least right.  Where it goes from here is anyone's guess.

2)  piggy-backing onto the previous segment - nothing is official, nor is it likely to become official for a few weeks.  These players will go home.  They'll talk to their families, friends, and highschool coaches.  They can still change their minds and decide to stay.  Anthony Carter himself was set to transfer until Bo pulled him out of the airport and talked him off the cliff.

3)  If McGuffie and Chambers indeed decide to transfer, wish them well, and move on.  I've seen a ton of posts/comments about how McGuffie was too small anyways, and he wouldn't play hurt so he's a wimp, and that he shy's away from contact.  Well we weren't saying that when he was wearing the winged helmet, so don't say it now.  I understand it's a natural defense mechanism, but all it does is make you sound bitter and...well...kinda stupid.

4)  Losing talented players hurts no matter where they are in a prospective depth chart.  Saying "RB is at least a place we can afford to lose a guy" doesn't help matters.  McGuffie, I still believe, is a talent that will serve this football team well headed into the fast undertaking that is "rebuilding."  Losing him hurts - there is no other way to put it.  Don't sugar coat this.

5)  I honestly believe that if he chooses to stay, he will choose to be a part of something that is special.  This team, this future team, will continue to be special with or without him.  Remember that.