There is nothing that can change the fact that this Michigan football team has lost more games in one season than any other.  That much is set in stone.  Years from now, 2008 will be remembered as one of the true nadirs of this storied program regardless of what happens this Saturday.  The statement "worst record in the history of Michigan football" is already etched upon the history books.  So what is left for this squad to play for?  Well if you were to ask Chris Spielman (2-2 against Michigan) or Kirk Herbstreit  (0-3-1) the answer to that question is decidedly simple: there's nothing left to play for, and given the choice, Michigan would rather sit at home than travel to Columbus.  Clearly that's not the case, and good natured Buckeye bashing of the Wolverines aside, both of those guys know that deep down there is everything to play for, because it's THE GAME.

It's easy to wax poetic about the grandeur and import of this rivalry.  If you're remotely involved on either side, you have that innate understanding of just what this week and this game means.  Beauford and I had the opportunity to meet and converse with Billy Taylor the night before the 2005 game in Ann Arbor.  He talked about 1969 and we listened like we were being read our favorite bed-time story as little kids.  He recounted Bo's pregame speech and the hitting and the atmosphere in the locker room at halftime.  You could just see on his face that even after 36 years, every detail was still as vivid as it was the day it had happened.  Suffice to say it was a chilling experience, and it drove home a very clear point: the result of this game stays with you.  Regardless of record, regardless of how the rest of the year treated you, this game and its outcome will be recounted through the years, good or bad.

What this Michigan team is playing for isn't a chance to save the season, the season is already lost.  What they are playing for is the opportunity to write another storied chapter in the long history of these two football teams.  They're playing to beat Ohio State, not because it will make us forget 2008, but because it's Ohio State and Michigan for the 105th time.  There does not need to be any other added incentive.

The question that remains is can this much maligned Michigan team pull off the unthinkable and provide a stunning addition to the already-written "worst record in the history of Michigan football".  What all Michigan fans are hoping for at this point can only be deemed a miraculous comma followed by one hell of a "but".

"Worst record in the history of Michigan football, BUT they beat Ohio State"

Somehow, that statement sounds infinitely better than the first.  It wouldn't erase the pain of this season, but it'd certainly do its best to make it fade into the background.  I'm not saying it will happen, but I'll be cheering my heart out hoping for it to, and here's the thing: there's nothing wrong with that.  There comes a point where no amount of self-effacing humor or forced objectivity can cover the fact that you're a fan goddamnit.  We may be 3-8, we may be outmatched by a more experienced and talented football team on paper, but I don't care.  It's high time we had a little homerism, a little enthusiasm, and a little passion about this team and this game... whether you think so or not, they deserve it, and I think at least one person would be proud. 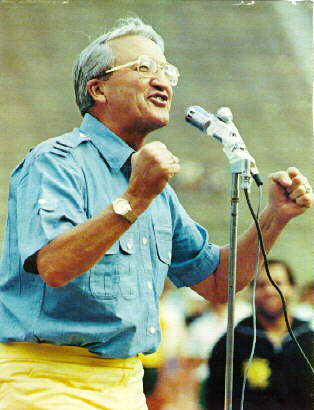