Patience is its Own Reward: Michigan Travels to Columbus to Face Ohio State in Season Finale

Share All sharing options for: Patience is its Own Reward: Michigan Travels to Columbus to Face Ohio State in Season Finale 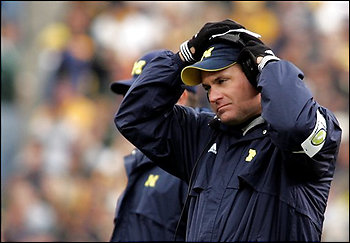 If you replace the number seven with an eight, then exchange the word "basketball" with "football" there would be little difference in the commentary between Michigan's 2007 basketball season and its 2008 football season. Lots of young faces. No true leaders. Seniors from a bygone administration doing what they can in a system they were not designed for. Transfer rumors. Attrition. A new coach from West Virginia trying to revive a moribund program with more happy memories than recent success.

While the season finale has yet to be written for the 2008 football team, the basketball team's 2007 season mercifully closed on a 10-22 note back in February. A season of turnovers, mistakes, embarrassing losses, frustration, and a coach clearly not comprehending the mess he'd gotten himself into.

But then again, some things are very familiar. On Saturday Michigan will face Ohio State to conclude both team's regular seasons. Michigan is banged up. Smarting from losses it can't explain. Facing a highly ranked, rested and ready Buckeye team in Columbus. And looking across the field at a coach who has lost to them just once in seven years.

On paper, this game won't be, shouldn't be, remotely close. The Buckeyes sport one of the conference's, if not the country's, best defensive units. They also possess a legitimate All-Pro calibre running back in Beanie Well, a first round tackle in Alex Boone, and young quarterback name Terrell Pryor who has the potential to make Vince Young look like Elvis Grbac when all is said and done.

Michigan will play a banged up offensive line; battered running backs; young, hurt, and mistake prone receivers; and a quarterback who frankly should not be playing divison one football. Defensively, Michigan has proven all year it can't defend the pass, is suspect against the run, and basically inept on special teams. It is 2-5 in conference, 1-3 in nonconference, and running on fumes.

So, on paper, it shouldn't be close. As Tim from Varsity Blue said in his preview of Saturday's game ...

He's right. It will. I would love to look into my crystal ball magic eight ball pants the future and tell you Michigan will win this game. I can't. I simply don't know the answer. If you put a gun to my head I'd tell you OSU will win in a rout.

But pride is a powerful motivator. it allows you to do things you normally wouldn't. Gives you strength you didn't have before, no matter how fleeting it is. And if there's anything the past few years of Michigan football has taught us, anything can happen. A year ago a mediocre Michigan team dismantled the reigning National Champions in the Citrus Bowl. It's not like any of us saw that coming. But that is college football.

This year alone Oregon State was spanked by PSU but got up off the tarp to punch USC and its national championship dreams in the mouth. Iowa booted Penn State's National Championship aspirations on a last second field goal.

Strange things happen when you are motivated.

And regardless of the outcome the future of Michigan Football is bright. Look no further than the raised fists of John Beilein as time expired last night. A year prior Michigan was a mistake prone turnover machine that set new standards in bad jumpshooting and poor decision making. This year, after a year of work, a full off season to prepare, and the opportunity to recruit players to fit his own version of the "spread offense," Michigan is an entirely different team with largely the same players. they play with chemsitry, instinct, and forethought. They play like a Michigan team.

Objectively we should've known last night's win over UCLA was coming. Beilein has been a tremendous success everywhere he has hung his whistle. Look at his records. Look at his character. Look at him as a coach and as a man. He pleaded for patience, and we begrudgingly gave it to him. We were promised he was a great coach and we didn't see great coaching. We saw a mess. But against UCLA, and in every game this season, we saw a disciplined well executed team. We saw what we were promised.

Now our eyes turn to Columbus, where we will likely see a mess. A turnover factory. A lot of small mistakes or a few major ones that will cost Michigan a football game. But things can change over a season and over the course of two years. We have seen positive changes in the Michigan offense as the yards per carry are up, even though the line and quarterback are inexperienced and frankly not that good. Little things belie improvement and promise.

Last night our patience with the basketball team was rewarded with a signature win we haven't seen in over a decade. Maybe, just maybe, if we remain patient with Rodriguez and the Football Team we will be rewarded again.Maybe it will be Saturday. Maybe it won't happen until next year.

But what we saw against Minnesota on the gridiron or UCLA on the hardwood wasn't an aberation or a mirage. It was a picture of things to come. Things that will appear at the unlikeliest moments if we are willing to wait for them. If we are willing to be patient. 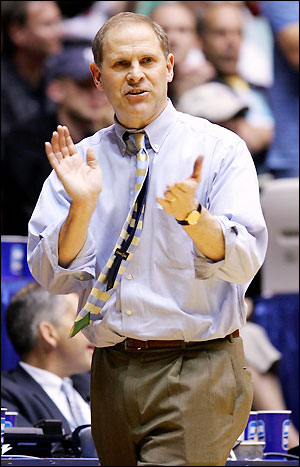