"We want to stay focused and play every game like it's a national championship game."

Just another reason why Manny Harris is the best thing to happen to Michigan Basketball since Glenn Rice was rainin' three's twenty years ago. Just like Rice, Harris led the way again with 16 points and 15 boards in Michigan's runaway victory over the Norfolk State Spartans Tuesday night.

Despite a cold start, Michigan ran away with Tuesday Night's game halfway through the first half. When all was said and done, Harris was just one of five Wolverines in double figures and the Wolverines had led by as many as 35 points in the blow out. Anthony Wright, Zack Novak, DeShawn Sims, and Air Canada himself Jevohn Shepherd all pitched in double digits. 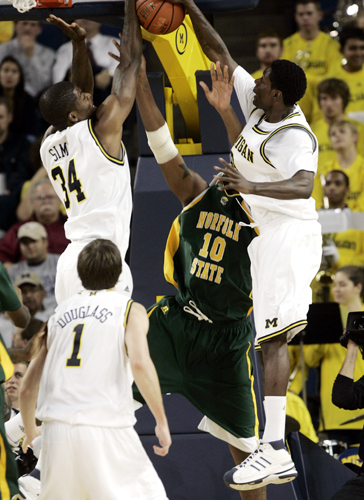 If there are concerns, it's three point shooting. Anthony Wright posted double digit points but went 2-6 from three, and Stu Douglass went 2-5 from beyond the arc. Equally concerning is that Kelvin Grady hasn't seemed to find a shooting rhythm yet, going 1-4 from beyond the arc and only taking two shots inside it. These are, of course, minor nit picks in a blowout win. Wright shot 40% from the floor. Douglass was 3-7 overall. Grady dished a team high 5 assists.

Michigan is firing on all cylinders following its outstanding run in New York. They'll look to keep the momentum going on Saturday, November 29, 2008, when they welcome Savannah State to Crisler Arena for a 2pm tip off. Get your tickets here.

Momentum is going to be key over the next two weeks. Michigan travels to College Park, Maryland to take on the Terrapins on December 3rd in the ACC/Big Ten challenge. Then on Saturday, December 6th, the host Duke to close out the tournament.

While the UCLA win was a nice start to the season, Maryland will be the true measuring stick of how far this team has come and where it fits in the NCAAs, the NIT, and Big Ten. Maryland draws No. 5 ranked Michigan State in the Old Spice Classic on Thanksgiving Night. The Terps have started relatively strong on the season, going 3-0 and posting a blow-out exhibition win. The only oddity on the score sheet is a 89-74 overtime win over Vermont. It was a game Maryland probably should've lost before the Terp's Greivis Vasquez hit a three pointer at the buzzer to force overtime. The Terps then proceeded to run the holy hell out of the Catamounts, allowing only a single bucket in the extra session.

Maryland is also a lot like Michigan; they are really, really young. There is only one senior on the roster, a grand total of four upperclassmen, and nine underclassmen (6 sophomores and 3 freshmen). Like Michigan they're a bubble type team that will go as far as their best player and their coaches' abilities to get the most out of their young talent. Like Michigan, the Terps lean on a special player, Greivis Vasquez, whose name I challenge you to pronounce correctly on the first try. Vasquez is Maryland's unquestioned leader and most dangerous player. Vasquez is 6-6, shot 43% from the floor and posted 2nd team all ACC honors last year. Another thing to keep in mind, Vasquez is a member of the Venezuelan National Team and led the ACC in assists. If there's a better one-on-one match-up for Manny Harris, I can't find one. This guy will be a true test for Michigan's defense all by himself.

But it's not just one player, the Terps are getting balanced scoring out of their starting five. The Terps have four players averaging 10+ points on the season, and the fifth at 9 a game. Like all Gary Williams teams, this year's Terrapin squad shoots the ball well, with all five starters over 40% from the field. For more Maryland related info, check out SB Nation's outstanding Maryland site The Testudo Times and their Vermont wrap up.

So with that in mind, Savannah State will be a good tune up for the Terps and for a lurking Duke team that looks as good as it's No. 4 ranking. I expect the Terps to give Michigan State a fairly good run on Turkey Day, so watch it and take note of how they play the Spartans. The Maryland/Michigan matchup promises to be a great test for both young teams.