New and Creative Ways to Lose

Share All sharing options for: New and Creative Ways to Lose

Every morning, my day begins with the beeping of my white-cube alarm clock that every kid who spent time being young in the 90's owned.  It has a green display though - I didn't associate with those who had the red one.  This happens at varying times in the morning, depending on the day, but every morning in one way or another, that alarm clock beeps, I hit snooze, and it beeps again.  This is natural; it has been occurring since that first dreadful morning of responsibility lost somewhere in my youth.  While I haven't really gotten used to the idea that a mechanical demon wakes me from my slumber at a predetermined time, I have grown to tolerate it and combat it with varying techniques I've learned over the years.  In fact, I've grown numb to the whole experience, and it hardly flits across my consciousness anymore.  It's simply the routine.  One would think that losing this season has grown to be included in the routine. 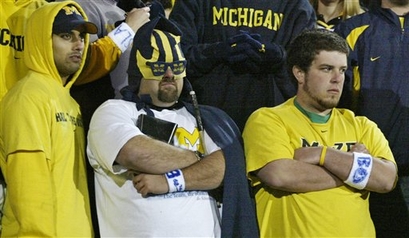 Another loss in season that was lost some time ago.

But here's the difference.  While that alarm goes off every morning in the same way, this Michigan football team seems determined to lose in different, exciting ways.  It hasn't become part of the routine because there hasn't been anything routine about the way they've lost.  Every loss still hurts like the first of the season, despite the fact that most were calling for this particular season to contain 6 of those losses in the first place.  It would be one thing if they were just getting blown out every game.  It'd be better.

Instead, the team is fighting.  They're giving every ounce of what they have because, dammit, they've worked too hard to be this bad.  They know they're not very good.  The seniors know they've been on better teams.  Instead of throwing in the towel on every game, they're working to improve.  Rodriguez is gameplanning around an offense that he knows is insufficient to the task placed before them.  That offense put up 42 points this past weekend on a team that held Penn State to 16, and Ohio State without an offensive touchdown.  The offense, as maligned as it has been all season, put together 4 quarters of execution.  42 points should be enough to win every ballgame you ever play in.  The twist this week, the thing that keeps losing from being routine, was the defense who was overmatched by a quarterback who had, until the week previous, been playing runningback and a few trick plays that worked in Purdue's favor.  So it hurt.  Again.  But you know what?  The team hasn't given up on that win yet.  You know it because when they lose, it hurts you as if you'd been playing the game yourself.  If they had just given up, it wouldn't hurt nearly as bad, the losing could fall into that routine, and we wouldn't even have to watch the games.

But we still watch.  Why? 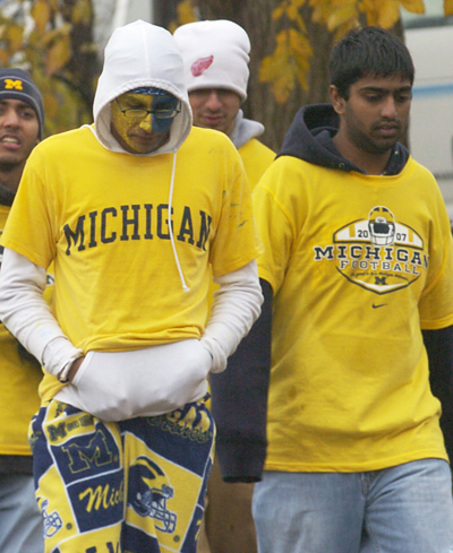 We watch because a win, just one win, will let us forget about this dismal season for one week.  Sure, it doesn't mean anything in the grand scheme [does any of this? - ed.] but it sure helps numb the pain until the Wolverines take the field for their next debacle.  So we watch.  We bite our nails.  We throw things.  They haven't given up, and neither have we.  That's why the hurt's worth it.  Losing, to Michigan, will never grow routine, it will never grow easy on the fans or the players

Take heart, Wolverines.  It hurts because they're tryers.  All of them.  The moment this becomes routine is the moment they've given up, and that's the day I truly fear.