Share All sharing options for: Michigan Football v. Minnesota: Our Usual Uninformative Q & A with The Informative Daily Gopher

In a season where it seems like every post I prepare is a "Keep Your Head Up!", "Things Will Improve!" or "I'm blindly holding out hold even though every sense I have is telling me these guys suck!" kind of post I am officially christening the poster below as the Maize n Brew Official Generic "We're Not Giving Up!" motto and mantra. 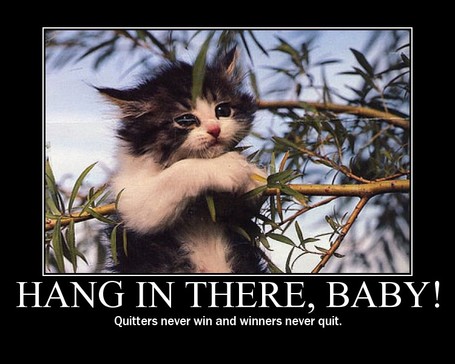 However, based on the season thus far, this one might be more appropriate. 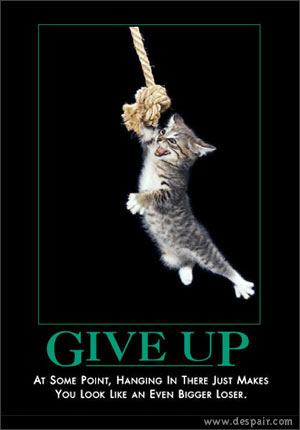 No! I will not give up. Well... I sorta will. No bowl games means I don't have to fret over post November practices, DUIs affecting the bowl trip, or the inevitable firing of random (or not so random) Assistant Coach. It's freeing in a way. However, there are games left, and dammit I'd like to win at least one of them. So I'll Hang in There, Baby! No matter how dumb I look doing it.

This of course leads us to the Minnesota Game. The Golden Gophers. The Varmint Cong. Al-Gophera. And The Daily Gopher. 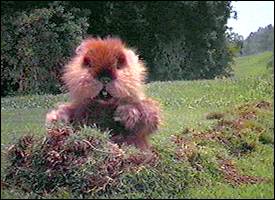 Starting Minnesota Quarterback Adam Weber loosens up before the game. via assets.sbnation.com

Tom and I have basically switched places for a year. He is currently enjoying a minimum seven win seven and I'm staring at 3 wins as a moral victory. However, Michigan is capable of beating the Gophers. Hell, we've made a habit of it over the years. (See Poster 1). However, the Gophers sport one of the better offenses in the Conference, its leading receiver, and a slew of excellent pass catchers in a spread-offense type thing that has given Michigan trouble all year. Meanwhile, Michigan is dead last in the Conference in total defense and 101st overall in pass defense. (See Poster 2).

None of that matters. (Poster 1). We will kill. We must kill. We must be victorious. But, to kill, "you must know your enemy, and in this case my enemy is a varmint. And a varmint will never quit - ever. They're like the Viet Cong - Varmint Cong. So you have to fall back on superior intelligence and superior firepower. And that's all she wrote."

In order to know my enemy, Tom and I did a little Q&A to ready ourselves for this clash of the titans, donchaknow. My answers to his questions can be found, meyah.

Maize n Brew: So, is this season the closest to heaven you've ever been? It's gotta be like the time you punched in D3 on the vending machine and got two bags of m&m's instead of one. How are you personally dealing with all this success and all those m&m's?

Varmint Cong: It is kind of like Michigan and Minnesota switched places for a year.  You have been used to getting your two bags of M&Ms for the price of one for years.   This season has been a lot of fun but I haven't been able to fully enjoy it yet.  The final three games have so much importance that the initial 7-2 kind of had an asterisk.  Not because they don't count or should be diminished because of the schedule but if we start 7-2 but then lose the three rivalry games it would kind of buzz kill the whole season.

We have shown tremendous improvement and 7-5 is remarkable considering we are 12 months from 1-11, but to be truly enjoyed we have to win AT LEAST one of the Jug, Paul Bunyan's Axe or Floyd of Rosedale.  So I'm enjoying my M&Ms but the "bonus bag" is still hanging on the edge inside the vending machine.

Maize n Brew:  Like all Michigan fans I'm consumed by my own misery, and have no idea what's gone on in the Big Ten. Well almost no idea. I did see the last second pick for a touchdown. What the hell happened? Mistake? Playing for the win? Just bad luck? Fill us in while we've got our heads out of the sand.

Varmint Cong: What a self absorbed Michigan fan?  That is so rare to find (sorry I couldn't resist).  The final play was a case of going for the win.  Sometimes you go for it thinking we can't lose UNLESS they pick it for a touchdown, which is exactly what happened.  Adam Weber was throwing to Eric Decker, his most trusted receiver, the ball was tipped, picked and then run back for the game winner.  I didn't have a problem with them going for it at that point, maybe Decker should have been running a sideline route instead of a something in the middle third of the field but I'm not the offensive coordinator.

Many have argued this week that since the game was at home and we had reduced the Northwestern offense to one dimension of one dimension (QB running was the only thing they had success with), so we should have played for overtime at home.  But Brewster has consistently been someone who plays for the win so this is what we expect from his team.

Maize n Brew: What are you going to do with the Little Brown Jug when you win it back? I assume its like the Stanley Cup in Minnesota, where every gopher gets it for a day. What do you plan to do with the Jug on your special day?

Varmint Cong: I'm going to put it on EBay.  How much do you think I'd get for it?  Eventually if both schools are strapped for cash they should put it out there and let some wealthy alumns battle it out.

There is actually a special Jug trophy case in the Gophers practice facility (it is often empty).  That case has been pulled out into a common area so everyday the players see it sitting empty.  It will go there for now and hopefully will have a special spot in the new stadium for all Gopher fans to see every Saturday till 2011.

Maize n Brew: Should we really buy into the Gophers? Seriously. Remove yourself from your fandom for a minute and look at the numbers and recruiting in a cold calculating way. Don't sell me on the Gophers. Give me clear facts that make the rise of our new Gopher overlords as inevitable as the setting sun or Mangino destroying an Old Country Buffet.

Varmint Cong: Last year's recruiting class was as talented as any two of Glen Mason's classes (on paper).  In the  Mason recruiting classes on record (2002-2007) he brought in a total of FOUR 4-star recruits.  Can you imagine Michigan going six years and brining in a total of four 4-star kids?  Unfathomable.  In ONE year Brewster brought in seven 4-start kids.

And this weekend's game will actually see the very first 5-star recruit who is taking an official visit to Minnesota.  Again this is like a foreign language to Michigan fans, but it is like Minnesota is finally getting a cell phone and entering the 21st century.

Strictly from the standpoint of talent on the roster it is improving dramatically.  Whether or not the Gophers can be taken seriously now or in the forseeable future depends not on Brewster's recruiting capabilities but his abilities to teach and lead his team.  Nobody questions the Zooker's recruiting abilities but nobody takes him seriously as a coach.  That is Brewster's next hurdle.

Big Thanks to Tom and The Daily Gopher for participating the the Q&A and for letting me call them the Varmint Cong.