Ed - Bumped from Fanposts because college football tourism is awesome, and this is awesomely done. 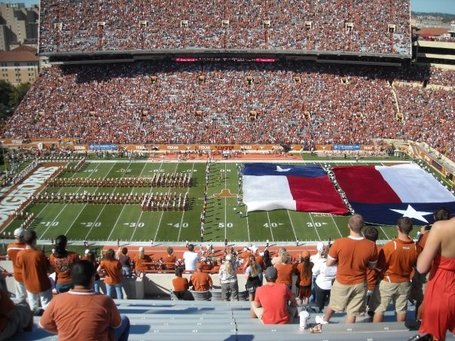 So this last weekend I went to visit my sister, a freshman at UT.  For those of you unaware, Texas played Baylor this weekend in a fairly lopsided affair.  The stadium (Darrell K. Royal - Texas Memorial Stadium) was extremely nice, and for those of you who have never been to Austin, its beautiful.  The pagentry of the pregame, the history, the pride--it was awesome.  The game wasn't much of a let down either.  Baylor brought everything they had.  Robert Griffin will terrorize the Big12 in 2-3 years.  This being his freshman year, he almost set the Big12 record for consecutive pass attempts without an interception.  I covet him.  He would be perfect for our current Michigan team.  The final score ended up much more lopsided than the play would have suggested early.  Texas eventually went on to win 45-21.

But what stood out to me the most is something I see at Michigan all too often, bad fandom. I've considered Texas and Michigan to be very similar programs, especially over the last few years.  The histories, the traditions, the success, Texas has been just a few years behind Michigan in many of its acheivements (such as the 97 M split MNC compared to the 05 UT MNC, wins all time, etc).  The similarities between Mack Brown and Lloyd Carr have always fascinated me.  Even the position of the two schools in respect to rivals has its similarities.  After my trip to Austin, I've found even our fandoms are similarly self righteous and overall, just poor.

Now I will throw out the idea that yes, this game was against Baylor (the Big10 equivalent of Indiana) and the game was played at 11am local time.  I could see this causing a slightly smaller crowd at Michigan Stadium, but what I saw in and around Darrell K. Royal was much worse than any Michigan game I'd been to or seen in the last few years.

Looking at the picture at the very top, you can see some empty seats along the alumni sections.  This is of very little surprise at pregame.  One would think the alumni are just coming in a little slow, perhaps walking the few blocks from the tailgating areas.  The problem was this wasn't the case.  The stadium never filled up.  The stadium was no more than 70% capacity at any time.  (box score says 97,000, i say bull) 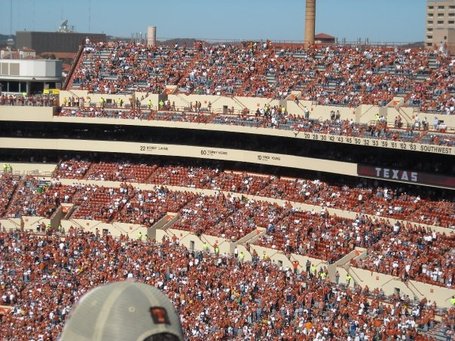 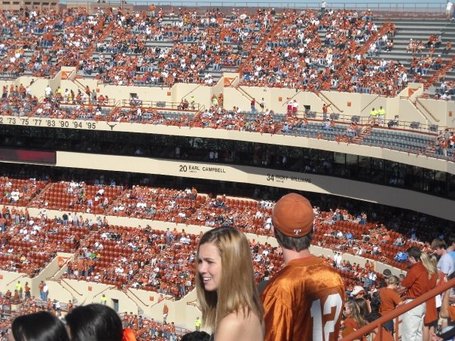 Late in the 1st half, Baylor was driving down the field down a touchdown (14-7).  I couldnt help but thinking to myself, "Wow, I have found a stadium quieter than Michigan Stadium."  Baylor drove the field to eventually score.  The fans were dumbfounded.  Texas scored on the ensuing possession; this score ended up being the last time Baylor posed a threat.  Griffin threw his second pick of the season, Texas returned it for a touchdown, they were then up 21-14.  This was at the 6:06 mark left in the half.

Over the next few minutes, droves of fans got up, to what I assumed was to beat the half time rush to the concession stands and restrooms.  The game played on, half time started, both bands played.  The shows were meh, but they were still alright.  When it came for the 2nd half to start, I noticed an overwhelming number of empty seats still. 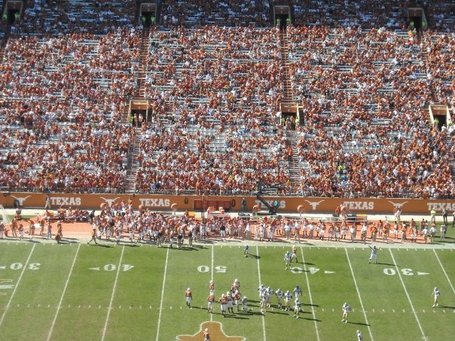 Well, the alumni section left.  The rest of the stadium was about as empty.  By the fourth quarter, there couldn't have been 30,000 people still in the stadium. 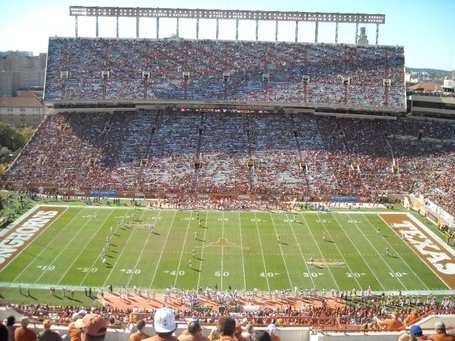 Late in the 4th Quarter via photos-h.ak.fbcdn.net

After the game, I went with my sister to return her friends student ID at San Jacinto, the dorms across the street from the stadium.  While waiting for the guy to come downstairs (more on the students in a second), I overheard a lady on her cell phone who appeared to be in her early 30s say,

I stayed longer at this game than any other, I was surprised.  I made it a whole 30 minutes.

It came off as she meant 30 minutes of time, not of game clock.  I was floored.  I coughed up a little bit of my drink and turned around with what must have been a grotesque look of shock.  She noticed me cringed and walked away.  I will admit this may have just been one fair weather fan in a group of die-hards, but between the sudden collapse in attendance, the plethora of soccer moms who look like they'd rather be sipping on their margaritas, and the way a large number of students I met, I have to imagine this isn't a chance occurrence.

So continuing the story, we met up with the kid who's ID and ticket I used.  The average weekend schedule for any non-business major student looks like this: Firday - Drunk of 6th Street, Saturday - Sleep until 3pm regardless of the time of their game, Sunday - Study like a feind.  That summarizes this kid thoroughly.  It also characterized half of the students eating in Jester after the game.  At every table, there were at least two or three kids that had just awoken and had no idea how the game went.  They'd sit next to their buddies and ask "how much did we beat them by?"  I'm not talking about just dorky kids who wouldn't know a football from a hole in the head either.  I'm talking about your average college guy who should love college football.  I've heard plenty of complaints about the fraternity and sorority girls at Michigan, here it's nearly half of the student body.

The more I've thought about it, the more I have to blame on the Texas Athletic Department's outreach to students.  This is the first stadium I've ever been to without a student section.  Students are peppered in with random fans everywhere but bottom of the home side.  Tailgating for students is non-existent near the campus as well.  Those living out on West Campus past the Drag may have some house partying going on, but that would be like partying at Greenwood or the far side of Washtenaw at Michigan.  It's just so far out of the way, its not worth going.  The majority of freshman dorms are only a block away from the stadium.  My sister was totally unaware tailgating even took place. While I acknowledge there are students like this at Michigan as well, it appears to be a much larger percentage of Texas students.

After thinking about the comparisons between Michigan and Texas fans, I've found a whole new appreciation for Michigan fans.  While our older fans continue to suck by demanding the young ones to sit down, they stay and root on our team.  Our undergraduates are plagued with those who are fifteen minutes tardy and drunk, but at least they show up, and most importantly they care.

I do want to specify, I mean nothing negative about UT and their fans with this post.  I am just noting the behavior I observed this weekend.  Good luck to both teams down the stretch.