The Big Ten's national perception is uh, not good.  The human voters think the Big Ten is a weak conference full of lackluster teams who don't play anybody, and when they do, they lose.  Ohio State's recent collapses in big games were the catalyst to this thought, and now, Penn State is paying the freight.  I will be the first to say that if I was a Penn State fan, I'd be livid. 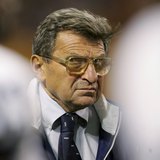 Don't look directly into his eyes. 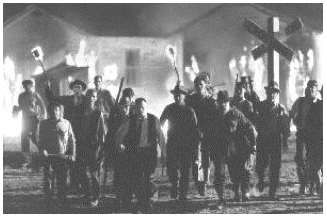 Of all the one loss major-conference teams, Penn State is getting the absolute ass-end of the deal in terms of respect.  Why aren't they being mentioned?  Because the Big Ten is a joke, and the BCS is an even bigger joke.  Want clear proof that the system we have in place doesn't count for anything?  Here goes:

Penn State beat Ohio State on the road.  Penn State is not getting any of the credit for that victory that, say, Oklahoma is getting for LOSING to Texas.  The system that we have in place ranks the Buckeye's very high, but nobody believes it.  As a result, a team like Penn State gets left out of the conversation completely and their own ranking suffers.  Nobody takes Ohio State seriously despite the fact that the system we have in place takes them seriously enough to put them in a BCS bowl.  It's backwards!  And it's dumb.  I'm not saying that Penn State actually deserves to be in the National Title game, but how on earth are they not even mentioned for it? 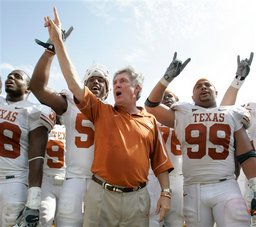 What? Oklahoma is getting credit for this?

Simple:  Nobody thinks the Big Ten is any good.  This must change, and you change it by winning bowl games.  With that in mind, let's take a look at some of the matchups because "conference-rah guy" or not, like it or not, the fact is that how the Big Ten performs in bowl games affects all the teams within that conference.  This includes Michigan should they ever return to a level mediocre enough to earn a bowl bid (home-team zing!).

Ok, so everyone pretty much knew that Michigan wasn't going to be your typical 8 win at least Michigan squad this year, so take what I'm going to say here with that in mind: was there a bigger disappointment in the Big Ten this year than Wisconsin?  Nearly everyone had them in their top-3 teams to start the year.  I myself had them as the number 3 team in the Big Ten, and I was in the minority.  Most had them at number 2.  After the meltdown at Michigan and the last-second TD against Ohio State, the whole team just sorta collapsed.  Sure, they come into the bowl game riding a 3 game win streak, but uh, those wins came against Indiana, Minnesota, and Cal Poly.

Florida State, meanwhile, has been sneakily playing some good football, blowing out a ranked Maryland team 37-3 in their last victory.  Of course, they lost to Florida horrifically, but then, who hasn't? (A small school in Mississippi slowly raises their hand...).  The bottom line is this:  I think Florida State is actually a little better than their 8-4 record suggests.  The games that they lost were largely well contested games in which they only lost by one score.  Wisconsin, on the other hand, lost to a horrific Michigan team, played Ohio State close, then got blown out by Penn State and Iowa.  Add into the mix that this is a home game for Florida State (played in Orlando), and you've got the ingedients to another big-time Big Ten bowl loss. (how's that for aliteration?)