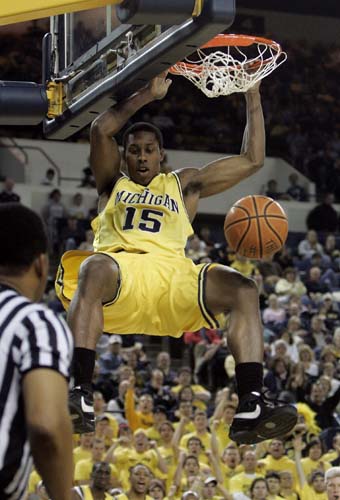 In the midst of a beak season that seems to rival an artic winter in terms of its icy hopelessness, Saturday provided a rare glimmer of hope and light for fans of the Michigan Basketball team. Despite requisite scoring droughts, missed layups, and the mental foul ups that seem to define this year's team, Michigan found a way to beat Penn State in Ann Arbor.

No this is not climbing Olympus or defeating Michigan State, as PSU did two weeks ago, but it is the first home victory for the Wolverines since early December of last year and their first home Big Ten conference win. Leading the way were DeShawn Sims and Manny Harris, each with 16 points, and, of course, Epke Udoh who went 4-5 from the floor and blocked 6 shots.

I have been extremely critical of the manner and style of play implemented by Coach Beilein since his arrival. Saturday marked a healthy change in my demeanor. While the team still worked the arc and cycled through its slash and dish options, it also worked itself down low, where Sims and Udoh are at their best. I was flabbergasted to see Udoh receive an entry pass within 3 feet of the basket. For once Sims and Harris slashed into the paint, or actually received a pass or two in an area they could score in, rather than wait at the wings for a shot 3 times out of 4 they would miss. Michigan finally played to one of its strengths rather than attempting to drown its opponent with Three point attempts.

Is this a sign of things to come? I hope so. But I'm not ready to declare Michigan's ailments cured after one game. The Wolverines still came out flat at the start of the second half and turned a 6 point lead into a 6 point deficit by going scoreless for a 5 minute stretch. Manny Harris is still turning the ball over at rate that even Jerret Smith finds excessive. Sims still has a tendency to disappear for prolonged stretches, and Grady has to contribute more than 2 points a game to be our starting point guard.

Despite these faults and flaws, the sun shone brightly on the contributions of Anthony Wright, who is quickly emerging as Michigan's best outside shooter, and Epke Udoh, who with 6 blocks reminds you he is still your King. There are positives to take away, and for once, they're not moral victories. For once, it's an actual "W" in the win column as proof of their progress.

The next few games will tell us whether this long bleak winter of a basketball season is finally reaching its spring, or whether the groundhog we saw on Saturday actually foretold another six weeks of winter. 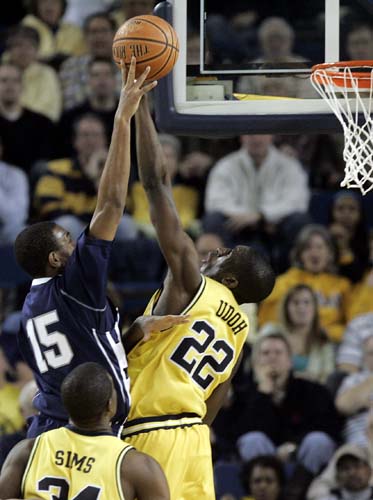