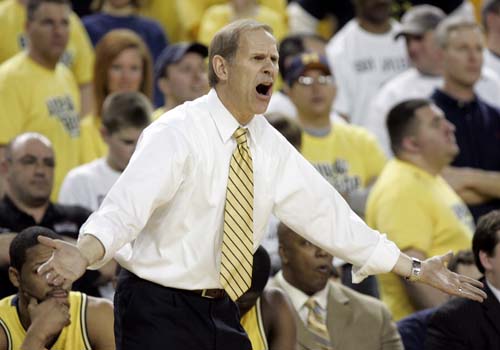 Somewhere James Naismith is turning over in his grave.

Saturday's scheduled Michigan Illinois basketball game honored former UM Star Jalen Rose before and at halftime of the game. Fans cheered Jalen. He met with the player. Everyone was happy.

Until the game started. Or at least allegedly started. It's fair to say no one in attendance thought they were watching basketball.

It was if John Beilein and Bruce Weber got together beforehand, sat down over a mochachino, and tried to devise an alternate ending to the movie "Hoosiers." Instead of an exciting last minute, clutch shot to seal a dramatic basketball game and spark a love of the sport in the youth of America, the two coaches got together and devised a game that would kill the sport as we know it. I have to think they determined the winner of this screenplay from hell by coin flip.

The two coaches must have been giddy that that Jalen Rose, a player known for creativity and flow would be honored during the game, and the story line would just be that much richer if they plotted this debacle during the ceremony to honor him. "Oh the irony," I'm sure Weber would've said.

The two teams couldn't the broad side of a barn with a cow. Passes were off. Offenses confused. Shots were no where near the target. The phrase "It's like there's a lid on the bucket," isn't an apt enough descriptor. No. It was like the bucket had ceded itself from the game of basketball, closed its borders, built a wall, and posted armed guards around the rim.

As a team, Michigan hit only 16 of 56 field goals, with a good deal of the shots coming from in close. Michigan shot a "scalding" 26.7% in the second half, not to mention 11% from three. Harris and Sims were stone cold for the second straight game. Udoh may have contributed 5 blocks and seven points, but he fouled a guy shooting a three while leading by six with under three minutes to go. Anthony Wright, starting his first game ever, went 1-7 from three.

Thankfully, the ugliness wasn't confined to one side of the floor. Michigan and Illinois combined to score 4 points, all by Michigan, over a five minute span. Illinois somehow managed to take 6 fewer shots than Michigan and took only 9 free throws. For the game the Illini shot only 32% from the floor and 55% from the stripe. If Bruce Weber somehow keeps his job at the end of this season you have to think he's either got dirty pictures of his bosses stored somewhere or an exorcism needs to be performed in the AD's office.

Five games into the Michigan "revival," the Wolverines are 4-1. While their record is improving, their play remains remarkably inconsistent. Shot selection is still an issue. There is absolutely no post play despite two guys around 6'9" starting. Michigan's back up center, Zach Gibson, continues to shot hurried three pointers, and lurk around north of mid court while on offense. The team is wholly dependent upon jump shots and cuts to the basket, and Manny Harris seems to be the only guy capable of the latter. Three of Michigan's wins during this mini-run were more the result of managing not to collapse on themselves than truly lighting up the scoreboard. If you were writing a story about Michigan's turn around, "Alive" might be a good place to look for material.

But a win is a win is a win. Michigan is now firmly out of the Big Ten basement, and tied with Iowa for seventh in the conference (5-10). Kelvin Grady is slowly showing he can handle Big Ten play and that he can handle Michigan's offense. The team continues to play hard and refused to hand over the game to Illinois despite how badly both teams were playing. This was most assuredly a game Michigan loses earlier this year, and one they likely lose by a significant margin. But now, hey, they're winning those games.

Michigan has a minimum four games left on its schedule, including Northwestern, @ Penn State, Purdue, and @ Big Ten Tournament. At 9-18, barring an upset of Purdue, Michigan is almost guaranteed to finish the year with its first 20 loss season in a generation. Considering the season's start, escaping this season without a 20th loss would be almost as dramatic a finish to this story as the last second shot was in Hoosiers. If you're greedy, throw in a Big Ten tournament win while you're at it.

Regardless of the final season tally or Big Ten tournament advancement, Michigan will exit the season neither with its head held proudly held high nor staring embarrassedly at the ground. It will walk away from Crisler knowing it's not a good basketball team, that it has a lot of work to do, but also that it improved dramatically over the course of the season and that it will be a competitive team in 2008-2009.

As a story Saturday's game, much like the season as a whole, isn't something you'd ever read. However, if Saturday's game was a prologue for success to come, you might be excited about the rest of the screenplay.