Special thanks to Gopher Nation for hosting this one. Go there tomorrow for the wrap up.

1.  ESPN's Adam Rittenberg recently ranked the top 5 rivalries in the Big Ten and there were some controversial results ( v as #3?). Clearly vs. is the #1 rivalry in the Big Ten, but give me your next three. Your school does not have to be included in this list, but regardless of who you choose defend your picks

Because is being accepted by the Roundtable as the defacto No. 1 rivalry (as it should) I've got two rivalries that shouldn't surprise you and one that should.

A. Wisconsin v. - Nothing like a rivalry between two states and flagship universities that really, really hate one another. The fact the the trophy is a deadly weapon (a very large axe) that gets swung around a crowded football field only makes things better. While the rivalry is stronger on the ice than the field turf, 's recruiting classes and new stadium will quickly turn this rivalry into one of the more heated ones in the big ten.  Don't let the accents fool you, these two fan groups like nothing more than antagonizing one another. Over the past century proximity in both geography and middle of the pack conference standings have bred a special kind of enmity. Badger fans gleefully point and laugh at the Gophers woeful 2007 season while the Minnesota faithful giggle at the Badgers loss to Illinois in 2006 and thier inability to go anywhere other than Orlando despite the preseason hype. As an added bonus, these schools offer up some of the hardest drinking tailgating in the big ten.

B. Michigan v. - The only instate rivalry that I can compare this to is v. A&M in terms of instate hatred and competition.

One school get 85 percent of all the instate talent, the other gets the legacies and the kids that think they should've been offered by School A. One school exists in the national spotlight, the other on The Ocho. One is the flagship University of its state, the other, well is not. One school is always playing second fiddle.

In the Big Ten no instate rivalry is as fierce as UM MSU. On 's side you've got nothing but calculated indifference, arrogance bordering on a God complex and fraternal chiding designed specifically to infuriate the Spartan faithful. On State's side you've got the fact that their schedule and season revolves around beating . That desire to beat is so strong that "scUM", "meatchicken" and "those fuckers" pass for high humor in . State fans will be the first to tell you their school is as good as . In some ways they are correct. State is an outstanding research institution and has a world class communications and education department. But it'll never be , and they know it.

And so every year the rivalry gets more and more intense and the “Woooooooooooooooooo!” gets louder. Coaches come and go, players bark back and forth, people take things waaaay too seriously. All the hallmarks of a great, great rivalry.

C. Illinois v Northwestern – As a guy, I love this rivalry. Over the past century its basically been irrelevant, but I love it anyway. There’s something about the instate pride thing and cellar dwelling that makes these game memorable. The Northwestern students shouting equations and waving their job offers at the students who point to the fact that women without unibrows go to their school. It’s mean spirited and so much fun to watch as an outsider. While the product on the field hasn’t been much to write about, Northwestern’s had the upper hand the last few years, but that seems to be changing with Zook’s appearance. Now we’ve got a pair of high octane offenses squaring off, two passionate fan bases who are just beginning to get an inkling that bowl games might actually be a yearly event, and a tomahawk to play for.

2.  Obviously winning every game is important and beating really good teams sends a stronger message than beating .  Assume every team is .500 this year and the outcome of your next two games means nothing outside of pride and a year's worth of bragging rights.  Give me the two schools you would want to beat (in order) and why. What makes beating School's A and B significant?

No explanation needed there. If rivalries are taken out of the equation, then just to see Mike's head explode from another loss to . And , because I think Barry Alvarez looks like Wayne Fontes. And I hate Wayne Fontes.

3. Take the two teams from above that you claim are your biggest rivals and give me a new mascot for them.

I did this a while ago when I Re-Mascotted the Big Ten. So in the interest of time, allow me to borrow from my prior posting. And yes, I take credit for the "little brother" nickname. 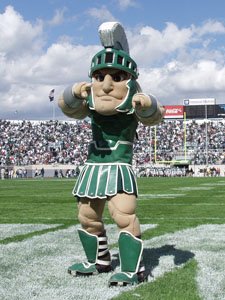 In all honesty, a pretty cool mascot. The Spartans were tough as nails back in the B.C. They knew how to fight, farm, sail, and kick your ass. On the downside, despite being a kick ass military power, the Spartans molested a lot of people. There is a moratorium on naming your football team after pederasts, so the "Spartan" nickname has to go. 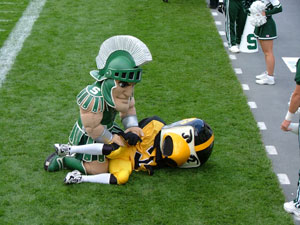 However, even without that disqualification Michigan State could hardly be described as a military/football power over the last twenty years. The last ten have been abysmal. New coaches. New schemes. Plenty of talent, no follow through. MSU is always trying to impress that other state school with their accomplishments, yet somehow they always manage to trip over their shoelaces before they can. 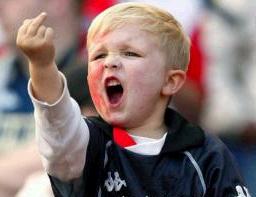 Look at me! Don't Ignore Me! I'm big enough to beat you! I swear I will. Our friends to the North are the consumate little brother of college football. Almost every year they have the gumption and the ability to beat their big brother. Almost every year their well laid plans blow up in their face. Usually MSU will pound Michigan pretty well early, then lose their nerve somewhere near the fourth quarter and end up flat on its back wondering what the hell just happened. As in all familial chains there are similarities. A good offense, suspect defense, rabid fanbases, etc. Like all little brothers they somehow manage to do something their older sibling can't, like beat Notre Dame. However, being the younger child of Michigan state schools, MSU is far louder, crass, and attention starved than its older sibbling. It can't understand why it has to stay home after the season ends and Michigan gets to stay up late, go to parties, gets all those conference championship trophies, and gets to play in bowl games. Its not fair Dammit!

A nut. Woop-de-friggin-do. While "nuts" is a good descriptor of our friends to the South, it really doesn't do them or their football team justice. "F*cking crazy" is more like it. Columbus is one of, if not the, most hostile place to play a college football game in the country. On game days, especially against rival teams, it degenerates into a scene from "Escape from LA" or "Lord of the Flies." Styrofoam coolers are filled with vomit or feces at game time. "F*ck [your team/state here]" is the state motto on game day. The team itself is much like its fans. Powerful. Nasty. Liquored up. Successful. More than happy to stick a shiv in your side or kick you in the jewels in order to steal your wallet. This ominous group is headed by Jim Tressel, a man who no one can connect to a single innapropriate action, yet despite that, you look at him the same way you would look at Michael Corleone. You know he can kill you with his own two hands, get away with it, and not give it any more thought than he gives to what color socks to wear. He, and his program, are made of Tephlon. Much like the Corleone family, they are the powerful haves of the Big Ten right now, and will be until they get caught. 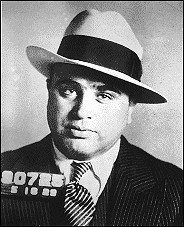 What are you lookin at?

The powerful, unflinching mafia of the Big Ten. Doug at Hey Jenny Slater put it best, "Thugs. They may wear nice outfits, but they're still thugs." 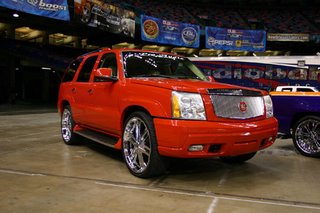 4.  There are some new rules in college football this year.  My favorite is the Big Ten experimental rule which states that after every win this year you get to pluck one player off their roster and bring them back to your campus.  Looking at your schedule give me two players you would pluck (assuming a win), why you would take them and what would you do with them?

B. Arelious Benn () - This kid is going to be something special at the next level. I have to think Rodriguez would find better ways to get him the ball than Zook can.

5. Brian at MGO was kind enough to post a diary entry which gives us and new coach Rich Rodriguez a list of traditions that maybe we were not all aware of.  This has inspired two final questions...

5A - are there any traditions that he missed? (here is your chance for some cheap shots).

You mean besides that key janglin', seat-never-leavin', quieter than a morgue section of fans at stadium? Well.....

2. Beating Coaches in a certain eastern state that should've retired before the Bush Administration. The Bush, Sr., administration.

5. Losing to PAC10 teams for no apparent reason.

8. Scratching our heads at 's inability to keep or hire a competent coach.

9. Protesting things that shouldn't be protested.

13. A general sense of entitlement, you plebian.

5B - Are there any traditions of your school's rival that we should all be aware of?

DUI's in escalades. Pooing in styrofoam coolers. Playing with themselves in libraries. This stuff just writes itself.