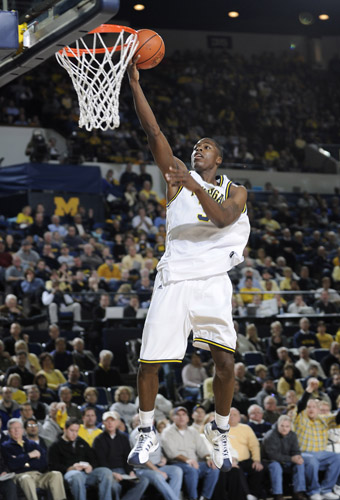 Harris with the Finger Roll. via multimedia.detnews.com

Despite it's best start in the last 10 years, wins over two top ten teams, and its obvious improvement, coming into Sunday, there were still big questions about the 2008-2009 Men's Basketball team. How would they react to the more physical Big Ten season? What would they do if they got done big against a legitimate opponent? When would they play real defense in the first half? Seriously? When?

In three Big Ten Games, Michigan had given up 42, 39 and 39 points during the first half of those games. Despite a home loss to Wisconsin that wasn't as close as the 73-61 final score indicated, the surprising result of these first half defensive meltdowns was a 2-1 conference record (and the likely shaving of a month off Coach Beilein’s life). Open jumpers. Lanes to the hoop. Problems defending down low. Slow defensive rotation. All these things seemed only present in the first half, and would (usually) disapear in the second. Giving up 40 points in any half is not a recipe for success. And the criticism that was first born against Savannah State started gaining a little more volume: "they’re going to get burned by their first halves if they don’t play better on defense."

Simply put, when are we going to see a complete 40 minutes out of this team in conference play?

Michigan’s response to this was to smother the Iowa Hawkeyes in both halves, en route to a 64-49 blowout victory in Ann Arbor. Almost as if to answer this growing criticism, the Wolverines smothered the Hawkeyes' during the first half. Michigan forced Iowa into 8 first half turnovers, a meager 16 points at halftime, and 26% shooting. Michigan clogged the passing lanes, creating the fast break points that had been missing in its prior two games, and generally pounding the Hawkeyes’ offense into a pulp.

Offensively, the Wolverines carried their momentum from the comeback win at Indiana and poured on 32 first half points and controlled the games tempo from the outset. Michigan took a 16 point lead into half time after shooting 52% from the floor and 50% from three. Instead of relying on the three ball as they did against the Hoosiers, Michigan went inside against the smaller Iowa backcourt. Taking only 8 threes in the first half, Michigan pounded Sims and Harris inside. Instead of watching their opponents grab rebounds uncontested, players like Zack Novak, CJ Lee and Laval Lucas-Perry all seemed to take a loose ball personally and fought their ways to first half boards. Novak seemed to be everywhere early, pulling down 4 boards and contributing outstanding defense despite not putting in a bucket.

Less than a week after the near debacle at Assembly Hall, Michigan seemed like a different team. Beilein's team imposed their will from the outset and never let Iowa establish its offense. Everything that drove you nuts watching the Indiana game seemed to disapear. There were drives to the hoop and players without the ball moving under the basket instead of standing around out side the arc. Defensively, Michigan was a step quicker against the Hawkeyes than they were against the Hoosiers. Playing much more aggressively, they forced Iowa outside the arc and never allowed them to get comfortable in the paint.

While Sims and Harris dominated the stat sheet, everyone contributed to Sunday’s win. Stu Douglass and Zack Gibson hooked up on one of the seasons prettier pick and rolls. Merrit and Lee provided only 21 minutes between them but they provided hustle and solid defense. Laval Lucas-Perry poured in 8 points, 4 boards and clogged the lanes. And Kelvin Grady continued to run the offense efficiently and effective.

In my opinion, Kelvin Grady continues to be one of the most underrated contributors to Michigan’s hot start this season season. You can point to Laval Lucas-Perry’s emergence as a third scoring threat, but LLP, to some extent, was a known entity prior to his transfer from Arizona. 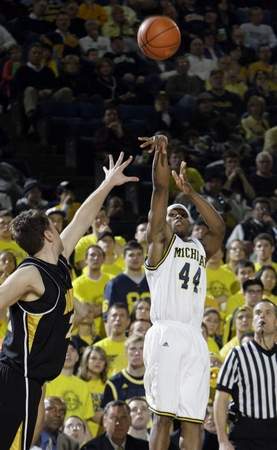 Grady Launches From Three. via cmsimg.freep.com

Coming into this year it was anyone’s guess as to whether Grady would be a contributor at all. Like the other freshmen last year, Grady turned the ball over too much and missed far too many shots. This year, it’s the opposite. Grady has 37 assists compared to just 11 turnovers, playing significant minutes, and doing what we’d hoped he’d be able to do, drive the lane and score or dish. Grady continues to pick opportune to drive to the rim and judiciously launch from behind the arc. Most importantly, Grady seems to have finally seized control of the "point guard" position by repeatedly being able to distribute the ball without turning it over.

Against Iowa Grady dished four assists and had no turnovers. Happily, this isn’t an uncommon occurrence. Against Duke, in two contests, Grady has 10 assists and 2 tunrovers, and in his last 10 games he’s turned the ball over just 6 times compared to 29 assists. Further, Grady has proven to be a perfect fit for Beilein’s defense, running the baseline to contest passes and shots from the corner quicker than any other player on the roster. He's playing with confidence and with the type of agression we saw from his brother as Kevin ran people over on the football field this past year.

The result of all this was Michigan thumping Iowa. Michigan lead by as many as twenty-eight points before sitting its starters and settling in for a 15 point win. While it's just one game, it's still a complete one. And hopefully the first of many to come this conference season.