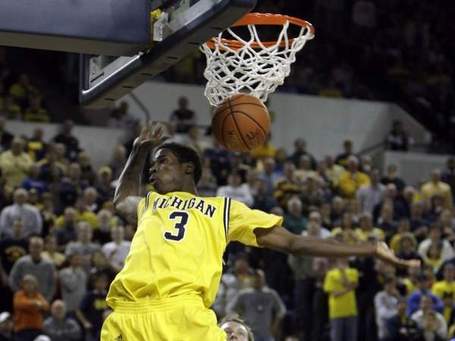 Photo via The Detroit Free Press

After a week of improbable comebacks and delivering beatdowns to undermanned Big Ten competition, the Wolverines will face their first true road test of the 2009 Big Ten Conference season when they travel to Assembly Hall to take on Illinois at 8:30 EST tonight. Tonight's matchup is the second, and final, meeting between the Illini and the Wolverines in the last two weeks, and serves as a prelude to a rough stretch of Big Ten away games and competition that will ultimately decide whether the Wolverines go dancing in March or trudge off to Manhattan for another visit to the NIT.

When the teams last met, Michigan gave up 42 first half points, but still managed to eek out a 74-64 that was a lot closer than the final score indicates. Even so, it was the first conference game that showed Michigan was more than a two man band. Sims and Harris had awful nights offensively against the Illini defense (combining to shoot 10-26 and 3-11 from beyond the arc). Despite this, Michigan clawed its way to the win on the backs of Kelvin Grady (3-6), Zack Gibson (4-5), and Zack Novak (4-5). Those performances off the bench sparked the Wolverines current 3 game win streak that has them currently ranked 25th (AP) and 24th (Coaches).

Assembly Hall in Champaign has been (yet another) House of Horrors for the Wolverines over the years. Since Michigan's last win in Champaign, the Wolverines have dropped 11 straight there, and with the success of Illinois' program over the last few years, wins have been difficult to come by against the Illini regardless of location. Even so, a road victory against an unranked but highly regarded Illini team (Ken Pomeroy has them ranked 18th!) would be another, vital, feather in the Wolverines' cap. A win tonight would be even more impressive because the Illini are fresh, having played a single game since the Wolverines' January 4, 2009 win in Ann Arbor.

That single game may have been against Indiana, but it was an impressive win. Illinois absolutely dismantled an Indiana team that nearly toppled Michigan a week ago. The Illini put 76 on the Hoosiers en route to a 31 point blowout. Perhaps the size of the blowout had something to do with Indiana losing Devan Dumes to injury, but it'd be foolish to suggest that. The closest Indiana got was 10 points with six minutes left in the First half before the Illini lead exploded to 25. In the end, the Illini were led by 21 from Trent Meachum (G), 12 from big man Mike Davis,12 from Demetri McCamey (G), and 15 off the bench from Dominique Keller (F). Combined this group shot an absurd 20-31 on the hapless Hoosiers.

What is most impressive about the Illini this season is they're consistently getting double figures out of four guys. Lost in the scoring frenzy was gigantic white guy Mike Tisdale who is averaging 11 points a game and former Michigan commit Alex Legion who will at some point explode on someone. There's plenty of talent on the team. The shot takers in Illinois lineup are McCamey, Davis, Tisdale and Meachum, in that order. Beyond the arc the Illini aren't particularly deep, but Meachum has been downright unconscious hitting 49.4% of his treys. Guard him tight. After Meachum, only McCamey launches them with any regularity, but he's hit only 33% of his 79 attempts from three. The attempts beyond the arc seem more to keep defenses honest down low. Illinois is an inside dominant team with 60% of its points coming inside the arc. Defensively, the Illini are one of the best in the Big Ten at denying the 3 point shot, and defending in general. They're at or near the top in every defensive category, and kept Michigan on the perimeter for a good chunk of their last game, before allowing the Wolverines to get to the basket or get good looks inside 12 feet.

But if there's a glaring weakness, it's an inability to get to the line. While the Illini hit a respectable 73% from the charity stripe, they're having a horrid time getting there. Their free throw to field goal attempt ratio is 23.8% and they're 10th in the conference at getting to the line with only 217 attempts (compared to 277 for UM and 364 for MSU!).

For Michigan to prevail tonight, they're going to have to be aggressive down the lane. Michigan's hot shooting tends to cool on the road, and if Illinois can turn the Wolverines into a jump shot only team Michigan's chances of leaving Champaign with a win are marginal. Harris and Grady need to take the ball to rack rather than settling for contested threes (Harris especially). The more they drive, the more the defense will have to crash down opening up Novak, Douglass, and everyone else. Down low, Sims and Gibson (yes, Gibson), need to play big against Davis and Tisdale on the offensive side and attempt to rack up some fouls on two of the Illini's best players. (If Gibson can get Tisdale alone on the wing, please let there be more Honky Magic). One last note, Michigan's been great at taking care of the ball, but Harris is still coughing it up with some regularity. Manny's got to take better care of the ball in this game while staying aggressive. Hard thing to ask for, I know, but it's what will separate him from the rest of the pack and help Michigan toward a successful season.

Defensively, the Illini have had two weeks to prep for the 1-3-1, so Michigan's going to have to mix it up. Alternating between man-to-man, a 2-3 and the 1-3-1 should give the Illini enough of a headache to prevent them from getting too comfortable. As Duke proved, if you can find space in the middle of the zone (usually the free throw line) you're in business. After a two weeks of prep and a game under their belt, I've got to think the Illini have a decent game plan on how to attack the 1-3-1.

It's going to be a good game and a great test for Michigan. As the Daily points out in its Mid-season review, Michigan's conference wins have come over teams with a 3-7 conference record. But a win over a tough Illini team on the road will definitely quiet that criticism and get the Michigan faithful even more amped up for the upcoming visit from the Buckeyes on Saturday.

We'll have open threads going for tonight's and Saturday's games. Hope to see you there.

PRACTICE FACILITY: Beilein, asked about the progress of the practice facility, said the public would hear something soon. It's believed the facility plan will be brought formally to the regents at the Jan. 22 meeting. Regents were briefed informally surrounding their December meeting.

"I think you will be getting updates on that real soon," Beilein said.