Sorry for the disappearing act yesterday. Real life intervened for all of us. Back to our regular programming. Illinois v. Michigan recap at the bottom. 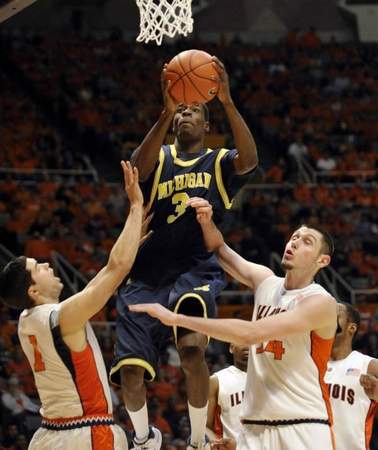 It's been a strange season so far for the Buckeyes. After starting out with a nine game winning streak, OSU is 3-3 and sitting at .500 in conference (2-2). The Buckeyes' wins, just like Michigan's, came against current Big Ten bottom feeders Indiana and Iowa. Unlike Michigan, the Buckeye's losses have come against the current cream of the crop in conference, @ Minnesota and @ Michigan State.

Ohio State, despite some attrition, is a good team. They've notched wins against Butler, Notre Dame (in Indy) and @ Miami (Thugariffic Miami, not the prissy school in Ohio). But they absolutely got their clock cleaned by Huggy Bear's Mountaineers on their home court, losing by 28. As you can see, Ohio State's resume is pretty good. Two quality wins over ranked schools (ND #7 and Thugarrific #22) and another over a team (Butler is 15-1) that will make the tournament on name alone. Plus, their losses are to three teams that will make the tournament, and two that will likely duke it out for the Big Ten crown. If you're wondering why they're not getting a lot of RPI/KenPom love, like Michigan, their snacky-cake non-conf wins are canceling out the good wins. Samford and Houston Baptist on the schedule don't get you love. Ohio State sits at 41 in the Ken Pomeroy rankings and currently posts an RPI of 29. Good. Just not top 25.

But they can easily beat Michigan if the Wolverines play anything like they did on Wednesday.

Ohio State is a lot like Illinois. They've got a bean stalk in the middle averaging around 8 or 9 a game, clogging the middle and blocking shots in BJ Mullens. From what I've seen, Mullens doesn't have the baby hook that Tisdale has, but he's more energetic and athletic, and has a wider variety of moves. OSU also has three guards/forwards between 6-5 and 6-7 who can move and score. The Buckeye's primary scorer is Sophomore Evan Turner who is averaging almost 16 a game and pulling down 7 boards. Basically, he's DeShawn Sims without all the three point shots and a lot more baskets. Turner's only game below double figures was the first game of the season. Since then he's shooting 51% from the floor. If there's a weakness, he can cough up the ball from time to time, but even that is fairly infrequent.

Moving the ball you'll see Will Burford, Jon Diebler and Jeremie Simmons. Normally we'd see David Lighty at forward/guard, but he's out with a broken foot. In his place, Burford (fr) has pumped in 17, 19, and 19 in his last three games. Burford's a former 5* recruit, so he's good and worth being afraid of. Diebler's OSU's three point specialist, and he knows it. Of his 128 shots on the season a whopping 98 are from three, and he's made 40.8% of them. He's made only 14 shots inside the arc. Mental note: Guard him at the line, let him shot inside it. Please. Simmons, on the other hand, is more of a distributor than Diebler or Burford. Simmons is in that 28-32 minute range and has picked up the pace dishing the ball with 2, 3, 5, and 8 assists in his last four games. If he's got a lot of assists, it's going to be bad news for Michigan. On the plus side, he's only 6 feet, so this could give Michigan a matchup advantage from time to time when he's on the floor.

For Michigan to come out with a win on Saturday they're definitely going to change up their game plan from Illinois. Bruce Weber basically gift wrapped the recipe for beating Michigan for the whole conference: Go inside with tall guys. If OSU puts Mullens 8-10 feet from the basket, he's going to be able to score at will just like Tisdale did if we've got Sims on him. Making matters worse, Sims is going to exhaust himself defending a guy that's got 4-5 inches on him, negating his offensive production that Michigan desperately needs right now. Solution? Don't know if I've got a great one, but here it is. Start Sims and Gibson. Yeah. I know.

Gibson's got the frame to deal with Mullens and it'll free Sims up to rebound and play offensively. Plus, Gibson's shown at least a little offensive ability the last few games, so it's not like this isn't an undeserved start. A line up of Manny, Sims, Gibson, Novak and LLP works fairly well. Have LLP run "point" and sub in Grady/Douglas/Lee as needed. Hell, use Eric Puls just as a whack a mole. But Michigan isn't deep enough to have two prime players (Sims/LLP) go cold and still win. As much as you need your big guns to step up, you've also got to protect them from time to time, and this game definitely fits that bill.

Let Gibby, Sims and Puls defend down low in man coverage. Let Manny, LLP and Novak run their way to open shots and harass OSU's sniper (singular). Contain Diebler's long ball and Mullens down low, then force Turner to go one on one with Sims and Burford to live up to his rep.

Make no mistake, this is not going to be an easy game. OSU plays good defense and usually only allows teams into the 50's and low 60's when they win. Michigan's not going to win a half court game against these guys, but they have to be able to play it from time to time to switch things up. Pressure defense in the 1-3-1 to lead to turnovers, and keep alternating the zones and man. Offensively, there need to be a lot more cuts to the basket without the ball and a lot more movement. If there are four players above the arc and one hanging out by the baseline 15 feet from the hoop, scream and throw things. That's what got Michigan beat in Champaign.

Michigan can win this game, but it's going to take a much better all around game and game plan than we saw in the second half on Wednesday.

Quick Recap of the Illinois Game

Less than a week after posting its first complete game of the conference season, the Wolverines returned to their old ways, alternating good and bad performances between halves. Unfortunately it'd be a mistake to say the Wolverines played a "good" first half, despite their 31-30 lead at halftime. Michigan was uncharacteristically sloppy with the basketball, turning it over 7 times and looked down right ugly on offense. Illinois didn't look much better. If not for Demetri McCamey shooting lights out from beyond the arc, Illinois could easily have been down ten points at the break. But they weren't.

Michigan's second half was one I suspect Beilein will burn the tapes of and pray never repeats itself again. While the first half wasn't pretty, there was a lot of energy from the Maize n Blue. Gibson contributed solid minutes. CJ Lee was all over the place. there was hustle under the basket. In the second half that disappeared. There were no cuts under the basket. Nobody moved without the ball. Save when two guys would break to the same spot looking for a pass (this happened at least five times in the second half). The offenses bunched itself up, failing to spread the floor properly and no one seemed to want to go inside other than a clearly exhausted Sims. Everyone, save Harris, wanted to launch threes rather than pay the price to set something up. And worse, when they did, it would rim out or miss the net entirely. 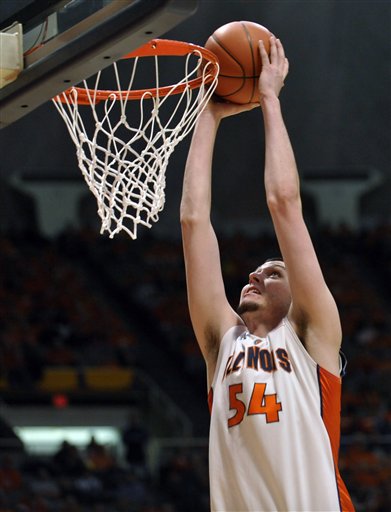 Waaaaaaaaaay too much of this Wednesday. via a.espncdn.com

The effort was there on the defensive end, but Michigan just isn't set up to handle a 7-1 honky with a hook shot. Defensively, you could see Sims was gassed midway through the second trying to keep Tisdale from scoring. As a result he couldn't finish on the other end. LLP and the rest of the crew were just off. Grady was 1-5 from three and wasn't even close on most of his attempts. But these things happen over the course of a season. It was a tough road game that Michigan let get away. Really let get away. There's not much you can say about it other than it was a "poor game" and Michigan needs to bounce back on Saturday.