Rumblings that began last week that Greg Robinson, former Syracuse head coach and defensive coordinator of the Super Bowl Champion Denver Broncos haven't lost steam.  Newish Michigan Blog Those who Stay has your full rundown of the Robinson dossier, with some help from Mgoblog.  To me, he looks like a defensive coordinator who thrives and wanes as personnel comes and goes.  Won a Super Bowl with the Broncos with super bowl worthy personnel.  While at Texas (granted, for one year) his squad was 18th in scoring defense.  Then he took the reigns at Syracuse and, simply put, ran one ot the worst programs that modern-day NCAA football has ever seen.  I'm exaggerating, but not by a lot. 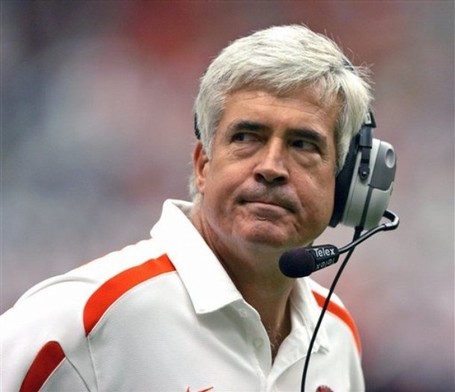 My guess is that Robinson, if given a David Harris in the middle, Alan Branch at nose, and Crable, Woodley, Englemen, and Trent as compliments...well he'll probably be able to put together a pretty good defense.  If he is missing components (like Shafer was missing safeties and linebacking for most of the year) he'll probably suck.  Look, I'm not downplaying the significance of coordinators, nor am I claiming that Shafer got a raw deal.  As I look at these coordinators, however, I am becoming more and more convinced that the player's make the scheme work - not the other way around.  Look at Hopson's resume from Southern Miss:  Top ten defensive units when they had Patrick Sutain (pro-bowl CB) and Adelius Thomas (pro-bowl LB).  When those guys went away?  Not so much.

If Robinson is hired as a coordinator, we know he won't be the only guy running the show.  It's clear that Rodriguez doesn't want a guy with a system and an attitude.  Robinson will coordinate within a plan designed by the coaching staff.  He can't screw up that bad.

Then again, spinning that last sentence to sound like a good thing is probably more of an indictment against that an endorsement.  I am nervous about Robinson, but not to OMG panic levels. 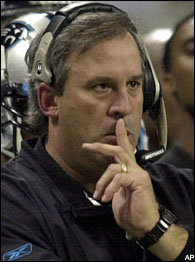 Late season collapses combined with early playoff exits = somebody's gettin' canned in the NFL.  Trgovac might just be the Carolina Panther's Scott Shafer.  Trgovac's first four seasons for the Panthers netted him the 8th, 3rd, and 7th (with a year at 20th in the middle).  However, his defenses have ranked in the bottom half over the past two years, and the rumors out of Charlotte (obviously) have him getting canned.

At this point there really isn't anything that would lead me to believe that Trgovac is anything more than a pipe-dream for fans.  Kind of an "I'm not saying, I'm just saying" kind of thing.  Given his ties to the university (played guard under Bo) it would be hard not to at least talk to the guy if he shows any interest.

More fumbling in the dark for names tomorrow.