And so the stretch run begins. Eight games into the conference season the Wolverines are sitting at 4-4, unranked and staring down the barrel of a 11 game shotgun finish to their regular season. Realistically, Michigan has to go .500 in conference to secure a tenuous NCAA tournament bid that two weeks ago looked like a lock. Even if Michigan holds serve at home, they're still going to need to steal a win on the road. And to be honest, Michigan's going to have to steal two road wins because I don't think anyone has them winning all four home games with Purdue and Michigan State coming to town. And that trip to UConn isn't going to do the Wolverines any favors, but it's not like this is impossible. It ain't going to be easy. But nothing worth having ever is. So you take 'em one game at a time, and good lord willing, things will work out. That first game is against Asmodai's henchmen from Columbus. Time to bust out the holy water and get to work. 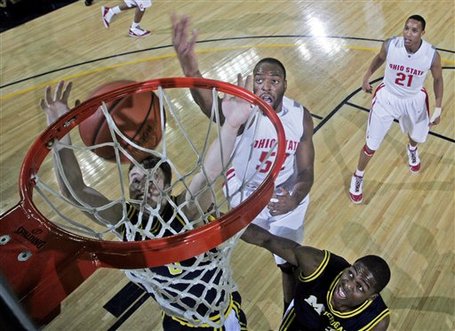 Since beating Michigan 11 days ago, life has not been kind to the Buckeyes. Illinois absolutely blasted Ohio State in Champaign 67-49 in a game that wasn't as close as the score indicates. It was ugly. Four Illini scored in double digits and only Mullens and Burfor managed to put in a respectable showing for the visitors. A couple of days later Michigan State came calling following their upset loss to Northwestern. Despite carrying a 6 point lead into the locker room at the half, Ohio State watched the Spartans go on a 31-17 to close the game. Michigan State scored 52 second half points on the Buckeyes, easily their worst half of the season.

As a result of all this, Ohio State is a game below .500 at 3-4 in conference and on the outside looking in at the Tournament. Say what you want, but right now with a 13-5 record and their marque win being against then No. 7 and soon to be unranked Notre Dame, it's hard to make an argument for a bid, Ken Pomeroy love or not (currently ranked 53 by KP and a surprising RPI of 31!?).

Like Michigan, Ohio State is entering the brutal part of their schedule. They've got games Purdue, Minnesota, Wisconsin, Illinois, Penn State and upset hungry Northwestern waiting for them. If there's a silver lining, 6 of the next 11 are at home, but they get ranked opponents in three of those games and Michigan tomorrow. So home may not exactly be as warm an cozy as Buckeye fans would like. 8-10 means NIT. 9-9 Bubble. 10-8, bid. That's the story.

Likewise, Michigan needs a road win to bolster its sagging resume. The Wolverines let two prime road opportunities against Illinois and Penn State crush them like a boulder, so stealing a win in Columbus before road trips to No. 17 Purdue and No. 2 UConn sandwich a game against Penn State who plastered Michigan less than a week ago. 9-9 in conference with two wins over top 4 teams should secure a tourney bid. But anything less than that is probably a trip to the NIT. So Michigan needs this just as bad as Ohio State, and this time they've got to do it on the road.

I wish there was something to point to in the Ohio State Offense or defense that would serve as a Michigan road map. But the Buckeyes have dropped their last two games for entirely different reasons. Against Michigan State they were out rebounded by 15 boards which coincidentally was the difference in shot attempts in favor of the Spartans. Against Illinois the Buckeyes controlled the boards but coughed up the ball 20 times and shot horribly from three (26.7%). FYI, they shot 10-20 from three against Michigan State. The Buckeyes are also getting balanced scoring. Four players scored in double figures against MSU, and for the season Will Buford, Jon Diebler, and Evan Turner are averaging 10 or more with BJ Mullens at 9.2 and Jeremie Simmons at 7.2 a game. Unfortunately, Mullens is beginning to heat up, and at 7'0" that's bad news inside for Michigan.

On the other side, Michigan is ice cold right now. Over their last four games Michigan has launched more threes than two point shots in three contests, and their once stellar shooting percentage has dipped to a next to league worst (10th) 32% three point percentage and a 10th overall field goal percentage of 43.4%. This hasn't stopped the Wolverines from launching three pointers. In fact it seems to have encouraged it. Weird.

Michigan finally cleaned house against Nothwestern. They did it by not being themselves and going inside constantly in Saturday's first half. This allowed DeShawn Sims to be the aggressor for the first time in two weeks and it paid off with the big man posting 14 first half points and basically doing what he wanted down low. The threes still came, but thankfully Michigan heated up in the second half going 6-13 marking the first time in four games they'd been above 40% in any half shooting the three ball. Hopefully it's a sign of good things to come.

Not much has changed since these teams met less than two weeks ago and I think the game plan I laid out then is effective now. The only thing that may not fit is starting Sims and Gibson. As UMHoops points out, we don't have a lot of big man depth, so if both of them get into foul trouble early, we're pretty much screwed. Michigan's biggest challenge will be dealing with Ohio State's pressure on the ball handler and their instances on making Michigan fight hard simply to get open. In the last game Michigan was flustered by this pressure defense and resorted to chucking ill-advised three point attempts rather than pick and rolls and executing the offense of the pressure.

Ohio State will pound the ball inside to Mullens and Lauderdale, who both combined to go 9-12 in the last game. Burford will spend the evening slicing toward the hoop and Diebler will lurk out at the three point line waiting to chuck up whatever comes his way.

Besides the obvious, Sims and Harris, Michigan is going to need big games out of Stu Douglass/Zack Novak and, believe it or not, Zack Gibson. Between Douglass and Novak someone's got to get hot to give Michigan another scorer on the wings. Novak will hustle 'till they turn the lights out, but his shot simply isn't falling, Douglass is the better shooter right now but he's not at Novak's level as a defender. One or the other has to make a difference tonight. Gibson on the other hand has to keep up his intensity. Over the last two-three games Gibson's shown some ability to physically defend, post up, and contribute on both sides of the court. Hell, he's even led a fast break or two. We need more of that. Mullens and Lauderdale need to get worn out defending him. When Michigan topped Illinois, it was in part because Gibson took Tisdale out of his element and blew past the 7 foot walking stick for some critical points. If we're going to win, Honky Magic has to be on. I'm talking David Copperfield on. But if Michigan gets hammered on the boards and shoots the way they did last time, all the Honky Magic in the world won't be enough.

I don’t expect to win this one because as a Michigan fan I know better than to ever expect a road win. So far we have seen an awful Indiana team almost hand Michigan a devastating loss, a very good Illinois team completely shut down the Michigan offense, and a solid Penn State team embarrass the Wolverines.

If that doesn't sum it up, I don't know what does. We'll have the open thread up tonight. Hope the see you there.

Stats after the jump...