After a little time off we're back to our regular broadcasting. Hope you'll forgive our little lapse over the holidays. In an effort to regain your favor, dear reader, here's a wrap up of the weekend's events.

Despite a Big Ten season opening loss to Wisconsin, Michigan (11-3 [1-1])returned to its winning ways with a 74-64 win over Illinois (13-2 [1-1]). Surprisingly, the catalysts for the Wolverines' win were not Sims or Harris, but Zack Gibson and Kelvin Grady. Gibson contributed a critical block followed by one comical dunk and a simply sweet baseline drive and finish with two minutes left. Grady sealed the game with a beautiful crossover left to right from the top of the key and drive to the hoop to create, and finish, a three point play. Anyone who thought Michigan was just Sims and Harris is sorely mistaken. Five players scored in double figures, including the recently bloodied Zack Novak who pumped in 11 points and collected six stitches courtesy of an inadvertent head butt from former Michigan commit and current Illini Alex Legion. If there was a downside to the game it was Michigan's spotty defense in the first half and Harris's five turnovers. But the emergence of Novak as an elite Big Ten shooter (reministent of former Duke Blue Devil, JJ Redick) and the consistent contributions of players other than Sims and Harris give this team the potential to be something special down the line. Also, LLP has shown he was worth the wait. A road trip to Indiana is up next on January 7th. 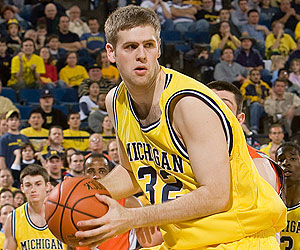 Behold, the second (much slower and vastly whiter) coming of Graham Brown. via mgoblue.com

The Ann Arbor News said Michigan keyed up its defense in the second half, and Gibson and Grady led the way to the comeback win.

The Free Press said after allowing Illinois to shoot 59% in the first half, DeShawn Sims lit into his teammates at half time, sparking Michigan's defensive clamp down.

The Detroit News says that Michigan is finally giving its critics some good answers to the question "how will this team react to adversity during the Big Ten season?"

The Chicago Tribune said the Illini's poor defense contributed to the Michigan win.

Football Recruiting Not Inept After All, Campbell Re-Commits to Michigan

Despite some self created drama, the only story about Will Campbell's final commitment was that there was no story after all. During Saturday's Army All-American game, Campbell re-committed to Michigan. Campbell provided one more tense moment during his 30 seconds of airtime, reaching toward an LSU or Miami hat before picking up his Michigan hat and dancing like a man that should never dance. Ever. Notre Dame students dance better than Campbell. But, even with his lack of dance skills, I'm happy to have one of the elite Defensive tackles in the 2009 class in the fold. Will. We love you. Now get your ass in the weight room and beat OSU.

Brendan Gibbons and Justin Turner helped lead the Army All-American East team to a 30-17 victory. Of critical importance to Michigan fans was the play of kicker commit Brendan Gibbons who showed a cannon of a leg and, god bless him, some accuracy. Also headlining the East's victory was Turner, who turned in a team high eight tackles along with a pick in the fourth quarter. Anthony LaLota saw some time as well, notching a tackle for loss. Wideout Jeremy Gallon sat out the game with a pulled groin.

Potential for an Outdoor Hockey Match-up at Camp Randall?

Courtesy of the awesomeness that is Yost Built and our mutual buddy Marshall:

In today's Detroit News, there was an article about how the Wolverines are primed to make a run in the second half of the year. The bottom of the article has an interesting tidbit:


Officials from Wisconsin's athletic department will be making a formal announcement within the next two weeks regarding an outdoor game played at 80,000-seat Camp Randall Stadium in Madison, Wis., in February 2010.

The word is, screw everyone else, Wisconsin wants Michigan as its opponent for this game. Maize n Tailgate will be in full effect for this game (should it occur). More updates as they become available.

OSU plays Texas tonight in the Fiesta Bowl. The Big Ten needs this one after going 1-4 in bowl games. Good luck to the Buckeyes. Don't eff this up like your last two BCS appearances.

Sam McGuffie will enroll at Rice. Good luck Sam. We wish you the best.

I thought nothing could top Llamar Woodley's stiff arm at Notre Dame in 2006. I was wrong. The Kentucky East Carolina Dog Food Bowl provided the greatest stiff-arm-slash-knock-out-jab I've ever seen. Defensive Linemen Ventrell Jenkins just knocks the holy hell out of ECU QB Patrick Pinkney en route to a game clinching fumble return TD for Kentucky. Just watch Pinkney's head snap back. AFLAC! My congrats to our buddies over at A Sea of Blue, SBN's simply awesome Kentucky Blog. If you're looking for SEC and Kentucky related basketball and football knowledge, go there now.

Ventrell, your name and your stiff-arm will live in glory for eternity. Or at least until ESPN yanks this off YouTube.

Another thing that struck a chord here at Maize n Brew was the sensational butt-whuppin' Utah delivered to Alabama in the Sugar Bowl. I mean, holy hell. 21 points in less than 11 minutes on the nation's (then) number one defense? Makes that two point loss to Utah back in September look a little better, don't it? Well. Not really. It's just one less obvious piece of corn in the stoolly turd that was our season. Even so, congrats to the guys at Block U on a perfect season. On the other side of the coin, I can't help but have some symapthy for Nico and Todd over at Roll Bama Roll on the loss and the basting, carving and serving of John Parker Wilson's mangled body during the game. If anyone can identify with an almost MNC season ending on an inexplicable beating at the hands of a team you were supposed to throttle, it's Michigan. I do, however, endorse their method of dealing with the loss. 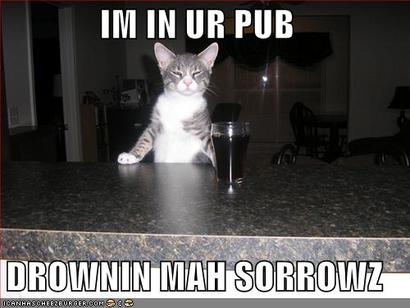 Finally, a nod to the guys at Black Shoe Diaries on an outstanding season that unfortunately can to an inauspicious end against the USC Buzzsaw in the Rose Bowl. Perk up guys. Lord knows it's happened to us. Recently. However, the Polar Bear on the last remaining ice flow on earth was a nice touch. Congrats to the Trojans and Conquest Chronicles on (yet) another Rose Bowl win. We hate you.