I imagine a kid sitting on a stool in front of an unfamiliar locker in a room painted teal and orange.  This kid slows down time in his mind.  It is an ounce of freedom in an otherwise jam packed day; the only time he really feels comfortable.  He milks it, watching the bodies around him go through their own routine.  Quietly, he gets out his eye-black strips and writes John on one, and 3:16 on the other.  He knows he'll be made fun of mercilessly by internet posters who claim his faith is an unwanted distraction, the other team, who will laugh at his dorky devotion, and probably by his own team, behind closed doors.  He doesn't give a shit though because he can beat the hell out of you, and given the opportunity probably would because nobody wants to go to hell, right?

And so, Tim Tebow led his team onto the field last night for the last game of the 2009 college football season.  The award for this game is a crystal ball that allegedly means you've won some sort of national award, and sure, the fans will get excited about that and there will be t shirts made.  That is the award for them.  The award for Tim is just the chance to play another game under those lights; the chance to be Tim Tebow one more time.  The chance to take those motherfuckers who laugh at his John 3:16 eyeblack, line them up one by one and and run them the fuck over, because damnit, he's Tim fucking Tebow, God bless you. 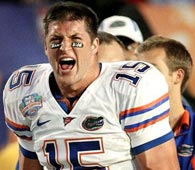 That's how the 2009 season ended; it is the indelible image that I have smeared across my mind.  Tim Tebow running over Oklahoma safeties who dared to get in his way.  He's not the best quarterback in the league.  In fact, I think he probably is the 4th best quarterback in the Big 12.  As if that matters.  In the way that Florida uses him, and the way he executes it, he isn't a quarterback; he's gone beyond that position.  He's the best college football player in the country.  He makes mistakes, no doubt about it.  He doesn't have the liquidity of of some of his teammates, including quicksilver in cleats Percy Harvin.  He throws interceptions when he's asked to play "quarterback." 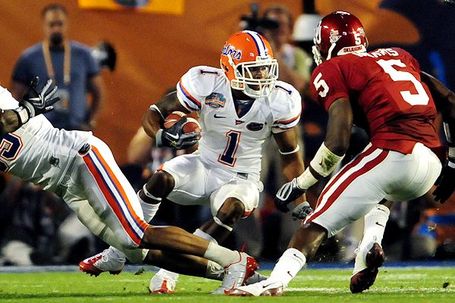 It's not as if Oklahoma didn't have their chances.  Score on just one of those goal-line pushes, and they probably force the issue just enough to let their line - dominant for the majority of the game - salt the game away with a combination of iso's and precision passing.  Given the opportunity to return the favor, they simply let the "snap the ball to Percy" offense glide right by them.  Even after they tied the game it was clear that the Oklahoma defense was getting tired of being Tebow's punching bag.  You can take it for 3 quarters, but in the 4th you stop getting back up.

It became Florida's turn to salt the game away, and they brought the industrial bags.  After 11 plays, 76 yards, and a back-breaking 6 minutes and 52 seconds, Tebow shot-put the ball inches from a defender's hands having it conveniently end up in his own receiver's bread basket.  A kid with "Nelson" across his back sprinted to the corner of the endzone while a mostly-Florida crowd went Vesuvius. 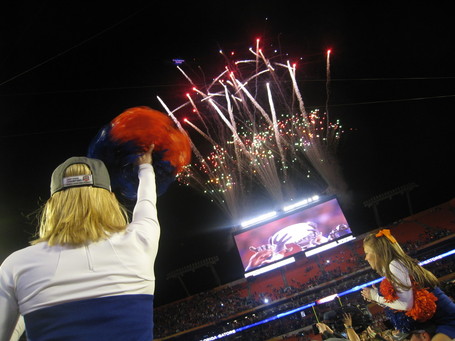 I don't have an anecdote to make this about Michigan in even the smallest way.  It's clear that I like Tim Tebow, I guess, if only because he's interesting.  I have no idea how he crams all that rage into a personality that is generally affable and selfless.  It's funny, to me, that these two teams met last year in the Citrus bowl, and Michigan actually won.  It's as if from that moment, the two teams boarded trains on the same track, except that Florida's was going towards Miami, and Michigan's...well...Michigan's is probably hanging off a bridge somewhere, or dangling over some precipice to be parodied by internet posters.  See? 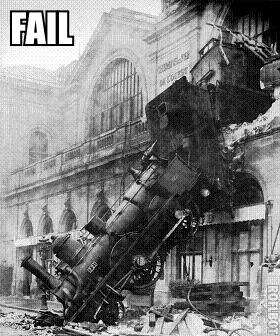 Michigan sat at home this bowl season, wondering how they are going to get this thing back on the right tracks.  I'm not a Florida fan, but I appreciate them as a team this year.  I hope, in the near future, that I can like a player for Michigan the way that I like Hart and Henne and Long, and the way I was forced to adopt Tebow this year.  I hope, in the near future, to be standing on the field in a tropical or desert or undisclosed location soaking in the fleeting moment of glory while Maize and Blue confetti makes a mess of the stadium and surrounding neighborhoods.