Hail To The Victors! That's How You're Supposed To Eat a Cupcake

Share All sharing options for: Hail To The Victors! That's How You're Supposed To Eat a Cupcake 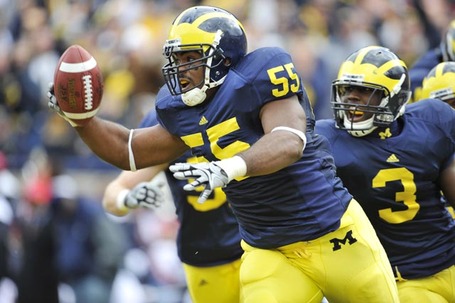 727 yards of total offense.  Yes, a Boeing's worth of yards in a single game.  442 of those yards were in the first half, which saw the teams enter the locker-rooms with the score standing at 49-3.  What can you say?  Delaware State was indeed awful.  That said, it was really nice to see us just put the hammer down from the get go and put this one well out of reach.  One could also call it refreshing.  Obviously a ton of positives to take away from this performance, not the least of which is that it was accomplished without Carlos Brown, Brandon Minor, and short of the opening series, Tate Forcier.  That Michigan emerged from this game without an injury to anyone and got as many players much needed experience was about all we could've hoped for.  I certainly wasn't a fan of this game even being on the schedule, but since it was, I don't think the team could've handled it any better than they did on the field.

- Nicely done Purdue!  Congrats to the Boilers and as I imagine many of their fans are saying: about time.  I just had to link to the following from The Buckeye Blog:

One of the biggest problems with the current BCS system is that when you play in the toughest conference in the country, it is nearly impossible to make it out of conference play unscathed. First a fifth ranked Penn State drops to Iowa powerhouse. Now the 8th ranked Buckeyes go down to Purdue who were only a play or two from turning a 1-5 record into a 6-0 record.

Unlike the SEC, the Big Ten fronts at least seven teams with the ability to do serious damage year after year. Along with the rivalry games which can go either way, Ohio State, Penn State, Iowa, Wisconsin provide bruising, physical play that would leave a PAC 10 team wilted.

Wait, what?!  Now then, no offense Boilermaker fans, but let's be honest here.  This was a Purdue team that was thoroughly outplayed in most phases of the game by Northern Illinois.  A team roundly predicted by the vast majority of talking heads to be battling for the 10th place spot in the conference this season.  The Buckeyes lost to a 1-5 team, albeit a team that's 1-5 thanks to a few close ones, they were still 1-5 and no combination of "a play or two" gets them remotely close to 6-0.  Top 10 football teams probably shouldn't lose to 1-5 teams.  Also, he must be excluding USC from that "leaving a PAC 10 team wilted" talk, since, you know, they took care of OSU as well (albeit in less impressive fashion than Purdue).  This game was not an example of how huge of a gauntlet the conference is, but rather just how "meh" Ohio State is capable of playing.  It will be awfully interesting to see how the rest of that fan-base reacts to this one, and Terrelle Pryor's performance in particular.

- The top 3 teams in the country all looked pedestrian at best Saturday.  Florida certainly did not look like the #1 team in the nation against Arkansas... a team that Alabama put a serious whoopin' on not too long ago.  Of course, Alabama had trouble putting away South Carolina, who is still South Carolina last I checked....  And Texas went out and outlasted a Sam Bradford-less Oklahoma in a game that saw its share of offensive ineptitude.  There's simply not a dominant team out there right now, and that's just fine with me.

- I watched the majority of the second half of the USC/ND game and the thing that really stood out to me was just how terrible Charlie Weis continues to be at managing a football game.  He passes up a field goal opportunity to go for it on 4th and short in the second half, at a time when I thought to myself, "kick the FG, there's tons of time".  Those three points probably would've been pretty big in that last minute wouldn't they?  Then, ND lets 10 seconds run off the clock inside the USC 10 yardline on their final possession when they had a timeout in their pocket... why?  That's two plays down there!  Yeeeeesh.

- Indiana, who was coming off of a shellacking at the hands of, ahem, Virginia, came out and beat the pants off of Illinois (a late Illini TD made it look closer than it ever was), who now find themselves at 1-5.

- One other note from the ND game... since the refs have suddenly started calling Michigan for this "illegal formation due to a lineman not being within X inches of the guy next to him in relation to the line of scrimmage" garbage I've been paying more attention to how other teams line up.  ND's tackles were vast distances off the line of scrimmage at many times throughout the game... stunningly no flags were thrown for it.

more after the jump

- Ok so 727 total yards and 10.1 yards per play... everyone looked great at times and we didn't show a darn thing to Penn State.  There's just not tons to discuss, but let's see what we can scrounge together eh?

- I might be wrong but I think there were FIVE players who scored the first TD of their careers today: Kelvin Grady, Martell Webb, Mike Cox, Vincent Smith, Brandon Graham (yes that counts), and

- Michigan's QBs combined for 15-18, 266 yards and 2 TDs.  Forcier looked sharp on his series and thankfully got to rest the rest of the day.  My one quibble, and it's really really minor: I would've liked to have gotten Denard Robinson a few more passing attempts, I mean, 3 for 4 with 2 TDs and all, but really would've liked to have seen him get more reps where he got a chance to make a read or two and throw the ball.  Again, that's nitpicking of the highest order.  How about Nick Sheridan looking downright efficient in there?  Nicely done Nick.  Of course I'd be remiss if I didn't mention Cone as well!

- 54 rushes for 461 yards.  Every back looked good out there.  I really liked what I saw out of Vincent Smith, nice job young man.  Shaw got the start but had as "quiet" of a nine carry 73 yard day as one can.  Mike Cox has certainly shown flashes of brilliance in limited carries.  I'm not going to extrapolate much from this game in and of itself, but I feel entirely comfortable saying we're stacked something fierce at the tailback position.

- 6 points, no TDs, nothing jumps out at me here, we dominated, we didn't give up anything stupid, tons of people saw the field, what else do you say?

- Hey, a blocked punt!  A bit later than I predicted, but a special teams TD is always great to see, especially when it's Brandon Graham rumbling into the endzone with it! 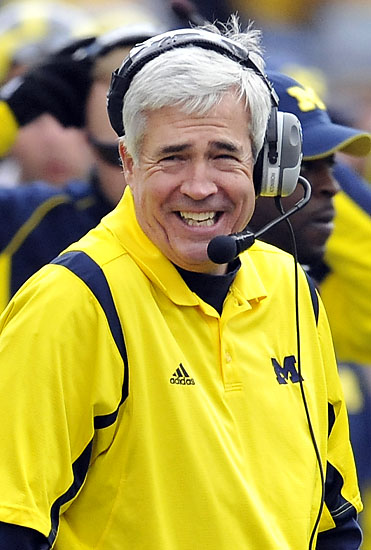 - Yeah, that about says it all... how nice is it to just say, "Well, we completely dominated a team we were supposed to dominate"?  I'm still opposed to having a game like this on the schedule, but I can't complain with how we played it.  Couldn't have asked for more heading into next Saturday.