Michigan takes their defense shreddin' show on the road this weekend to East Lansing, home of the Michigan State Agricultural and Technical School known simply as "The Aggies."  I made that part up.  They're actually Spartans, which isn't gay at all. 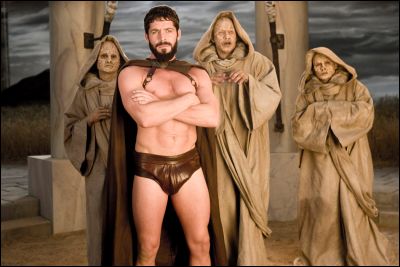 Nope.  Not at all.  Anyways, the weeks preceding any Michigan vs. Michigan State game are usually filled with blustery comments from a team perpetually on the rise, and this year is no different.  Oh, there it is:

Mark Dantonio is the man credited with the Michigan State turnaround, bringing them back to prominance and glory, insulting the physical stature of Michigan players on his way:

So what can the Wolverines expect from the latest Michigan State team to "turn it around?"  Well, not a whole lot in the way of defense.  As mentioned in a previous post, Michigan State's defense is considerably worse than Indiana's, and their passing defense is one of the worst in the country.  Their rushing defense has been good not great, and that theoretically plays to their advantage as Michigan brings their top-ranked rushing unit into town.  The key here is making sure that their one star linebacker - Greg Jones - has a body or two on him every play.  The defensive line is going through some injury problems, and is paper thin.  The run-stuffing onus is going to be put on the linebacking crew who, frankly, aren't very good except that Jones can be super man when he wants to and make up for the lack of talent everywhere else.

I look for Michigan to throw some wrinkles into their zone-dive heavy runs.  With the linebackers no doubt aware of the potent rushing attack, they will be susceptible to those little screens and slot-ninja awesomeness that Michigan runs off the zone-dive look.  If I were a betting man, I'd also say that Michigan is going to deploy something offensively that we haven't seen yet.  There's a reason Rodriguez and co. shut down practice to outsiders this week, you know.

If Tate remains upright and continues his accuracy on the run, I would think that the passing game is actually going to be a more successful venture for this offense.  Michigan State is going to set up to defend that run at all cost.  Forcier should have the opportunity for a big day.  Like Brian has mentioned in his preview - I look for a heavy dose of Koger as well after seeing Wisconsin TE's run wild.  And please - no more Webb?  I don't have a solid understanding of X's and O's, but it seems that he's dropped a few that have hit him right in the numbers while Koger is busy catching misthrown balls by using the force or something.  Just throw to Koger, mkay?

Meanwhile, the Michigan State offense is actually pretty effective throwing the ball themselves with starter Cousins, and to a lesser extent Nichol.  In my season preview of Michigan State I predicted that Nichol would eventually start over Cousins, but I was wrong, wrong, wrong.  Cousins has been accurate, except when pressured.  When pressured, this happens (fast forward to about the 9 minute mark for Cousins):

So yeah, just like every other opponent we've faced this year, if our pass coverage is to be successful, it will be pressure that makes it successful.  We were good at this against Western, atrocious against Notre Dame, and semi-good against Indiana.  Eastern doesn't count.  Cornerbacks can succeed playing off in coverage if a quarterback is hurried into making questionable throws.  Cover-2.  It works.  But if Graham and co. are getting bottled up at the LOS, it's going to be another looong day in pass coverage.  I predict that Mark Dell will have at least one completion for 40+ yards.  If he gets more than one, we're going to have trouble winning this game.

The MSU rushing attack isn't special at just 117 YPG.  That's good for 10th in the Big Ten.  What's nice about this particular feature of the Michigan State offense is that Graham probably won't have to worry too much about the run and will likely be directed to "kill Cousins as early and often as possible."  This should, should, allow him to become the pass rush beast he's always been, and hopefully allow for a sack or two.  Just moving Cousins off his spot will be very important.  If you look at Roh's success is getting into the backfield, it's almost always a result of Graham providing pressure that forces the ball carrier to roll into Roh.  I think this is a game in which both Roh and Graham can get really nasty.

Speaking of pressuring the quarterback, and as SCM points out daily now, I would like to see a few more designed blitzes for Ezeh.  He's been so tentative so far this season, why not get him mixed up in the action at the LOS?  It would make it nearly impossible for him to play passive.  I'm sure there are any number of holes in this logic, it just seems to me that he's better when he's got a clear idea of where to attack instead of saying "here is a hole, I must plug it quickly."

Prediction:  Michigan is going to need every ounce of offense they can muster, and there are so many wildcards affecting this that it makes predictions tough.  Will Tate be ok on the road?  Hell, will the entire youth of this team be ok on the road?  Will his shoulder hold up?  Will the defense get pressure?  Will it be raining as hard as they've been predicting?

This puppy is going to be a shootout.  My prediction is 42-38 Michigan.  Take the over. 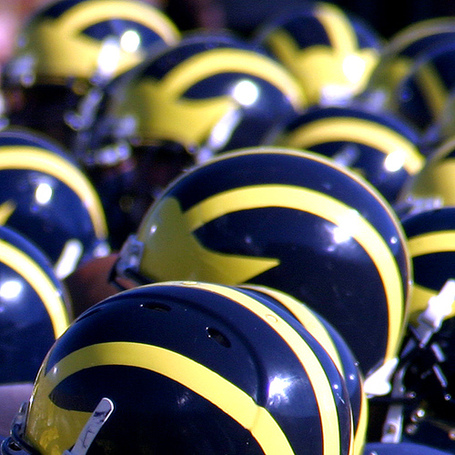