You Say Potato, I say Paterno...

Share All sharing options for: You Say Potato, I say Paterno...

For all the world, it looks like Joe Paterno is going to go into the record books as the winningest coach in college football history.  With the regents, or trustees, or whatever they're calling themselves shamelessly advocating for a coaching change in Tallahassee, and the NCAA forcing Bowden to forfeit the wins attributed to his cheating history-of-music, art, bullshit, and other miscellanea felons (note: not a felony), Paterno's place at the top of the heap is all but assured.

And why shouldn't it be? (BOOM ALBOM'D)

Joe Paterno took the reigns of Penn State in 1966, at which point I was one of those "future generations" we all seem so hellbent on preserving things for.  In 1969, he was offered both the Pittsburgh Steeler's AND the University of Michigan's head coaching jobs - both of which he turned down.  The Steelers hired Chuck Noll, and we hired Bo.  And there was much celebrating in Ann Arbor and Pittsburgh for years to come.  Paterno, meanwhile, continued to kick ass and take names at Penn State, running to two National Titles in the 80's, and three Big Ten titles since joining the conference in 1993.

Joe Paterno, it should be noted, was good friends with Bear Bryant back when the houndstoothe cap was patrolling the sidelines in Tuscaloosa, smoking chesterfields, and drinking bourbon neat.  While their differing lifestyles (Bear lived his life like he stole it) have obviously contributed to their differing longevity's, there are many similarities that can be traced in each of their career paths.  Early dominance that involved giving a young man a 5-spot for a date if he played well, a tough as nails take no shit attitude, and a school that allowed it.  The difference is that Bear, when the NCAA decided that giving that young man a 5-spot is illegal, never adapted.  Instead he hung on, griping about the old ways, and eventually quit coaching.  This isn't to say that Bear Bryant was a quitter, or a cheater.  Rather, it is meant to point out the fact that even when compared to the coaches who are considered by history to be "the best" Joe Paterno matches up.  And he's still coaching.  When Bear Bryant finally did stop coaching, he died, and you wonder why JoePa hangs on so tenaciously.

But the reason JoePa has been able to hang on so long is his ability to adapt.  The game, at its core, has remained the same since 1966.  There is still tackling, still running, and still a certain type of young man that plays the game at a very high level.  It's the landscape that's changed.  The NFL, agents, mobile quarterbacks, the prevalence of minorities, scholarship reductions, title-9, BCS, the internet, youtube, message boards, I could go on, and on, and on.  And one by one, we've seen coaches of the "old guard" fall by the wayside, either too old, or too "old school" to continue being productive.  Yet, somehow, Joe Paterno has endured.

It doesn't matter how much actual coaching the guy does, or how much time he still spends on the recruiting trail.  The fact of the matter is that his door still says "head coach" and he still blows that whistle every Spring.  I don't see anyone else leading the Lions out of the tunnel on Saturday afternoon. Joe Paterno has seen Penn State join the Big Ten conference - only to find out that no, they wouldn't be dominating, let the spread read-option come into his program, continued to assemble some of the nastiest defenses around, advocated for a playoff system while most people half his age are considered "stodgy" enough to continue with the status quo, and - perhaps above all - kept Penn State winning (for the most part). 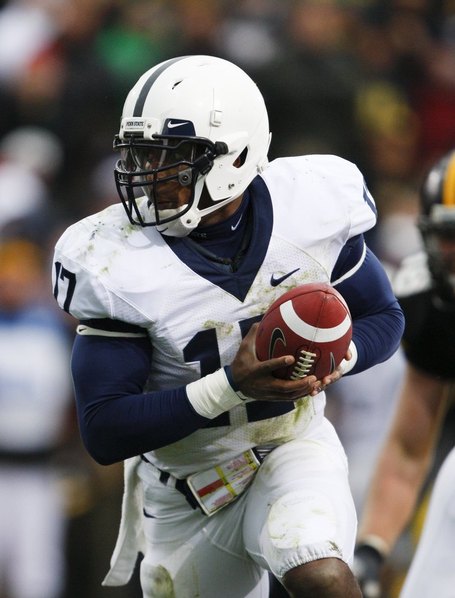 On a personal level, I've never held any sort of vitriol against Penn State.  In fact, insofar as I can bring myself to rootfor another Big Ten team, I like Penn State.  Both Penn State and Michigan have the same sort of vibe surrounding the program, which is probably why they are both able to attract fans that didn't necessarily attend either institution.  In a single word, that vibe could be described as "iconic."  And how befitting that Penn State has arguably the most iconic coach...well...ever...in Joe Paterno.  When they're not playing against Michigan, I will pull for Penn State, and I still believe their "white-on-white" away uni's are amongst the best in any sport.

This week, I will hate Penn State.  But that doesn't mean I don't respect the hell out of the program, and the man who has become the face of that program.  And forgive me if I have a catch in my breath on the day that Joe Paterno finally does decide to hang 'em up.

Now let's go beat the hell out of them.