Share All sharing options for: Will JoePa Throw Rock Again?

A StateCollege.com article caught my eye the other day that I thought was worth sharing to at least bring up a matchup that I don't see a lot of analysis be directed at: game-planning by the respective coaching staffs.  Jumping right in:

This is the week that the Nittany Lion coaching staff will truly make a difference. (And the scenario will be repeated in two weeks when Ohio State comes to campus.)

So ok, that's a horrible opening sentence, nobody knows where this guy is going, but anyway.  I include it as a jumping off point largely because one of my long held theories on Penn State is that their coaching staff tends to go into shell mode on the road and is more likely to "throw rock" than unveil an innovative scheme with some unseen plays to catch an opponent off-guard.  In fact, picking a completely arbitrary 16 road games ('06 to present), one finds that the Nittany Lions own an 9-7 record over that time span.  Before a PSU fan loses it, they are indeed 5-1 over the last seven road games, duly noted.  Quick aside, I did not include bowl games in that mark because IMHO it doesn't apply to an in-season away game where you have a week to prepare as opposed to a month, that said though if any Big 10 team gets to brag about recent bowl performances, it's Penn State.  Anyways, onward.  The article goes on to discuss how anyone off the street likely could've coached this PSU team to victories in most of the games this season not featuring an opponent named "Iowa".  While that's obviously just eye catching hyperbole and a fun way of rephrasing the "weak schedule" title that's hung around their neck since we started talking about this season however many months ago, it is probably safe to say there haven't been tons of obstacles in the game-planning department thus far this year.  About that Iowa game, they raised this point:

My theory is this: It was too easy early against Iowa, and everyone on the Penn State side underestimated Iowa’s ability to play Penn State football better than Penn State.

Ok my interpretation of that is this: In Michigan parlance, once they found themselves with what looked like a decent lead, PSU reverted to throwing rock against a team that specializes in only throwing rock... and it turns out Iowa had a bigger rock.  This, in my recollection, seems to happen to Penn State and their staff more often on the road.  The most vivid example that comes to mind was the '07 Michigan/PSU contest.  That game featured a Michigan defense that hadn't held a spread offense to anything short of 900 yards that season, the blueprint for how to scorch the defenders of the Maize and Blue persuasion was out there for all to see.  Penn State was capable of running a spread attack, and what happened?  Well...  Joe Pa didn't exactly spread the field and air it out.

[...] urban legend has it that the night before a road contest at Michigan a few years ago, Paterno got nervous and stripped down the offensive game plan, simplifying it to the point that the Lions didn’t do enough to take advantage of their Jimmy and Joe advantage. True? I dunno know. 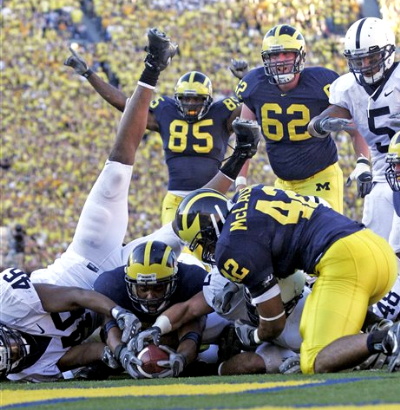 So, there's some game-result precedent there for the "go into the shell" mentality on the road, but do the statistics back that up?  I looked at the offensive numbers over these road games games since '06, we'll split them up by quarterback.  Without further ado: Daryll Clark on the road:

Hard to find any fault with Clark's 5-1 road record as a starter on the road as long as you look away from that Iowa game, but I do think there are a few things to discuss.  First off, I'd categorize the OSU win as obviously a big-time win, though all of the others on here?  Well the Purdue, Syracuse, Illinois, and Wisconsin wins were against a range of mediocre (probably kind to Wisconsin) to downright dreadful teams.  The other thing that jumped out at me was just how little he's done in these games: just 3 total passing TDs, averaging 168 yards per contest.  There has been exactly one football game where Clark's arm accounted for more than 50% of PSU's total offensive output: Wisconsin last year.  The reason I bring this up is that a lot of the discussion I've seen this week has focused on Michigan's issues in the secondary and how Penn State might exploit that.  BSD Mike mentioned it in his response to Dave's questions yesterday in fact.  In Clark's career to this juncture, it doesn't seem as though there has been an instance on the road where Penn State has set up a game plan for him to air it out.  Not saying they won't, not saying he can't, just an interesting trend thus far.  What about his rushing stats you might ask?  Well...

Again, interesting.  Two things, look at the attempts (apologies, I didn't separate out sacks here, just have to live with that) and the yardage.  Are either what you were expecting?  Taking both of these tables together, I'm left scratching my head a bit.  For someone of Clark's regard, he just has not asserted himself in a football game on the road.  Of course, he's also not been Anthony Morelli.  Need proof?

Whoa...  So yes, 4-6 in 10 games, 10 TDs and 10 INTs, average of 203 yards per game.  Yeeegads those picks, I had forgotten about that '06 OSU game until looking up these numbers.  Funny how nobody ever gives Kirk Herbstreit a hard time about his ridiculous backing of him several years ago in the preseason.  Surely I can't be the only one that remembers that right?

I feel comfortable in saying that a quick poll of the members of this site would reveal that Evan Royster is concern numero uno this Saturday.  Yet most of what we've seen in discussion to this point centers on the matchup of Michigan's secondary and Penn State's passing attack.  Looking at our defense, I'm concerned about the secondary, you're concerned about the secondary, hell all of us are downright worried about the secondary (I mean, 3rd and @#$%@# 24!!!!!).  So will JoePa and company adjust the gameplan to attack Michigan's D at fairly well recognized weak point or will he stick to his past method of keeping the game simple and trying to get an excellent though somewhat underappreciated-nationally-Royster on track to open up the passing game?  The numbers show that he's unlikely to put the contest on Clark's back on the road, combine that with what has not exactly been a fortress of an offensive line this year and you have to wonder just how many risks Penn State will take on Saturday.  That of course is why you play the game as they say.