You guys know that fancy blogpoll that Brian runs for football?  Well, there's one for basketball now and we've got a vote.  The goal for week one?  Stay off the "awards list."  Mission accomplished.  The table formatting is a bit off on CBS - which I expect will be rectified soon - but you get the point.

How did I vote?  Funny you should ask:

Explanations, excuses, and other fun stuff after the jump.

Ok, first and foremost, it's important to establish how I went about doing this.  The answer:  not very well.  Basically, I took a look at the AP poll for last week and used it as my starting metric.  Weak, I know.  I wish I could say that I mathematically calculated the Ken Pom rankings and divided it by the coefficient of the coaches poll, etc.  I have actually seen most of these teams play, and unlike football, a loss doesn't automatically kill you.  Duke and Wake both lost horrifically last week, but from what I've seen they're still two of the most complete teams in the league, thus they remain highly ranked.  Ok, let's roll 5 teams at a time with explanations to follow.

These top 5 teams are all interchangeable at this point.  They all have a great inside presence, they all have shooters, they all play defense, and they all have a point guard capable of running the show.  I still believe the Wake team that I saw beat Duke is the best basketball team I've seen play this year.  Unfortunately, they've been rather bearish in recent games, but they still get a spot in my top 5 if only for that one game.  UNC still has the players to be untouchable, but they've not put it together yet.  UConn has the best inside presence of the bunch, Oklahoma has the best individual player, and Duke finally has some guys with will stretch the court on you.  All are very, very good and all are very, very capable of making it to the final 4.

After the triumvirate of ACC teams come a 2nd cluster of Big East teams.  Marquette, I know, just got hammered, but I still think they're deserving of a top-10.  Their resume is amongst the best in college basketball.  Louisville above Pitt?  I think they're pretty interchangeable right now, and are one more Wake/Duke misstep from being in the top-5.  Clemson just manhandled Duke, and as such they get my attention in the top-10  Xavier, meanwhile, is over rated in this poll, probably, because I think they'd get smoked by the next 4 teams that come after.  However, they're also the type team that goes to the sweet 16 as a 5 seed or something and scares the daylights out of North Carolina.  Top 10?  Probably not.  Moving down in next poll?  Most likely.  But it is what it is: either flat-wrong or cleverly-spun.  You choose.

Butler is in the Xavier boat.  They keep winning...in the Horizon league.  Bonus points awarded, however, for Hinkle Fieldhouse, which remains the best place on earth to watch College Basketball.  Witness: 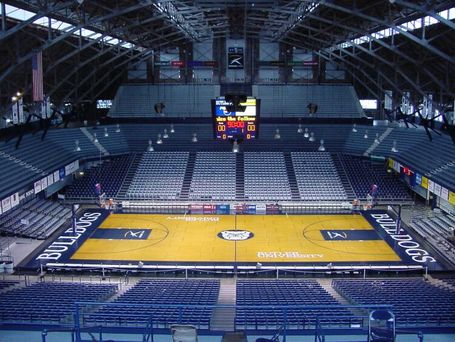 You can feel the three's raining from 5'8" white kids.

I don't know why, but count me as thoroughly unimpressed with UCLA.  Sure, they just drubbed Notre Dame, but Notre Dame is proving to kind of suck.  I don't trust the back court at UCLA, and its that simple.  One of those guys has to start playing much better if they want to compete in March.  Memphis and Michigan State should both be ranked higher, and will be in the next poll providing wins this week.  Sometimes these polls take on a life of their own, and when you look at it again 2 days later you say "hang on a second...really?"  That's what happened there.  Illinois gets some love because my biased ass thinks the Big Ten is actually really tough this year, and they're still somehow hanging around.

Villanova will be higher next week, provided wins.  Minnesota is dangerous to any team because, hey look, Tubby can still coach.  Kansas is climbing, and I really really wouldn't want to face them as an 8 seed.  Gonzaga might have just been called out for good this year.  They'll make the tournament, but I doubt they'll make much noise.  Miami gets the Clemson treatment for killing Wake, except in the top-20 instead of the top-10.

Do we care?  You'll notice one ommission:  Purdue.  This isn't because they shouldn't be ranked, it's because the computer somehow deleted Purdue from my "input" field when I submitted the ballot.  I hope this changes, and would slot them in around 19 or so if I could.  Also:  Missouri will be ranked next week, provided wins, and thanks to Texas for proving me right about leaving them off my ballot.