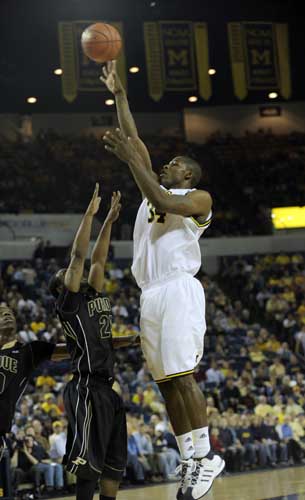 Nobody ever lives their life all the way up except bull-fighters.

Cuss D'Amato once said of Mike Tyson, "What do I think? I think he hits with bad intentions." After watching DeShawn Sims on Thursday night, that's all I could think of. Not content to hang around the perimeter as he did against Iowa, Sims planted himself within five feet of the basket and hammered his way to a career high 29 points against the Big Ten's best defense.

Going into the game I was worried that JaJuan Johnson (easily the Big Ten's best name) was going to be a problem for Sims. At 6' 10" with arms like a condor, Johnson is the only center in the Big Ten I thought was as quick as Sims and had the length to negate Sims jumper. Man. Was I wrong. Sims simply overpowered Johnson who clearly thought Sims would play him on the perimeter. Shoulders, hip bumps, spins using the basket as an extra screen. Sims had the full arsenal on display. Leading, and almost willing, Michigan to a victory.

Alongside Sims spectacular play was the resurgence of Manny Harris. After a stellar start to the season, Harris had become and increasingly frustrating player to watch. Content to settle for contested threes, willing to be bothered and pounded in a quiet evening when he's not getting calls, not getting into the lane nearly enough; Harris got himself benched after a wreched 3-13 performance against Iowa. Much was made of Beilein's decision to sit Harris as the Wolverines dropped a critical contest to a very bad Iowa team, but in hindsight, it may have been what saves Michigan's season.

Harris attacked the rim with an aggression we haven't seen in weeks, and no, I'm not counting the Northwestern game. It's Northwestern. Decent or not, I expect him to explode on them, because, well, they're Northwestern and they're not a tournament bound team. Manny hadn't been Manny against a good team since Michigan beat Penn State on February 5. He's a star, and stars rise against good competition.

And that's what he did. Harris dished, dunked, floated a couple of runners, drilled three treys, and pounded the boards. People fed off of him. Stu was diving on the floor. Novak was grabbing boards from people four inches taller than him. The help defense was there. Rotations were fairly good. Harris played the way he expects of himself and the way everyone has come to expect of him when he steps onto the floor.  Harris may have forced a shot or two, maybe been a tad bit careless with the basketball here and there, but he was a difference maker again.

As a result, Michigan's seniors, Lee, Merritt, and Shepherd, all leave Michigan with a win the last time they set foot on Crisler's renovated court. These guys have endured a lot. Two of them were walkons who have grown to become contributors on was it arguably a pretty good,but inconsistent, ball team. One of them was a young man who never seemed to click in his uniform, but never said a peep, never became a distraction, and always, always gave everything he had on the court.

With the win, Michigan moves to 18-11 (8-8). Michigan can now boast wins over 4 ranked opponents and is 4-3 over their last seven games. A win over Wisconsin or Minnesota should cement their tournament bid, but reaching 20 wins sure as hell wouldn't hurt.

I'll leave the number crunching to Dylan at UMHoops, but Michigan's back in business in terms of making the tournament. Their RPI should crack the 40's after the win over Purdue, and another win over Wisconsin or Minnesota on the road should keep it above 50. However, the way things stack up, someone who's got a decent resume is staying home from the Big Ten.

There's a huge logjam of teams on the NCAA bubble, and that includes Michigan. Ohio State, Minnesota, Wisconsin, Michigan and Penn State are all under consideration for the tournament and all are at 8-7 or 8-8 in conference. I'm guessing two of those five teams stays home. We'll have to see how it all sorts out.

But for now, there is hope and excitement. See you on Sunday.

BTW, if you're wondering about "Laserpants," check out the live blog. We're keeping that as Manny's new nickname. Our thanks to everyone who turned out for the live blog last night. We're definitely doing that again. Special thanks to Boiled Sports, Hammer and Rails, the Hoover Street Rag, and all our commenters that made an appearance. You guys rock.