The Kids are Alright

Share All sharing options for: The Kids are Alright

Michigan didn't, couldn't, beat Uconn on Saturday night.  This, from a team with a losing conference record and a likely berth in the NIT, is not surprising, nor is it disappointing.  Wait.  It's oddly a little disappointing, if for no other reason than they had a lead at halftime, and Stu Douglass just kept hitting three's.  Of course I'm not mad that they lost - if I were truly mad that Michigan lost to Connecticut then I'd probably be eating Light Brite pegs with a kind orderly clapping in my face and yelling "no!"

But I am disappointed, and I just keep coming back to that because as of right now, there aren't any Light Brite pegs in front of me, and everyone at work is regarding me with the same level of "ignore" as usual.  This is an ok feeling to have regarding Michigan basketball? 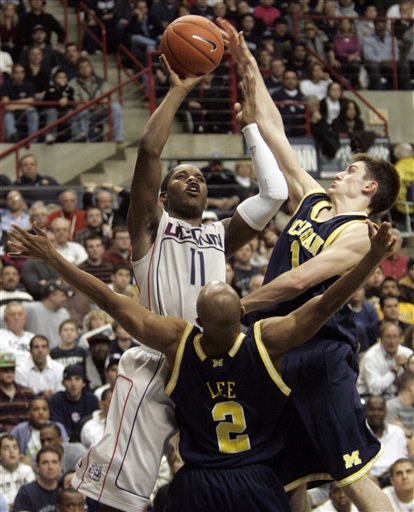 Deadspin has become nigh unreadable since Leich left, and was trending that way during the waning months of his tenure.  I am reminded, however, of an oddly out of place heartfelt post he wrote after the Superbowl in which he said this of his beloved Arizona Cardinals, annoyingly referred to as "Buzzsaw":

See, in a way, losing this way — in the most soul-crushing, sweet-God-what-a-game-holy-frack-where's-something-tall-to-jump-off? fashion possible — justifies it all. The Buzzsaw were not going to lose a Super Bowl the way the Falcons did, or the Chargers. That would be pedestrian. That would be dumb. That would make the whole thing seem silly.

No, losing like this makes it all worthwhile. This was not a 27-7 shellacking, the Steelers simply piddling out the clock as everyone prepares for work tomorrow. Losing like this, after a shocking comeback, after a Yes This Team Is What We Had Hoped For And Dreamed About After All fourth quarter, lends gravitas to it. Now, the Buzzsaw is not the obvious doormat of the professional sports industrial complex. We now have some tragedy. We now have some pain. Real pain.

It feels all right. It feels raw, and throbbing, and palpable. It feels what it feels like to be a sports fan. It feels like I cheer for a team that matters. It feels like we've got some hair on our chest now. We couldn't really compare ourselves to the Bills before, or the Browns, those franchises who have come close enough to taste the nectar. Now we can. Now we've had some actual suffering. It's not just a dull slow ache. We've actually bled.

Now Michigan has never been the doormat of the sports world.  Unlike a professional team, we've got football hockey, baseball, swimming, field hockey, softball, academics, and a myriad of other "successes" to which we can point and say "a-ha!" and stamp the word "relevent" in big red letters across our institution.  But Michigan basketball?  It's gone past irrelevent and into the ether of the non-existent.  Brian wrote on Mgoblog in a post I can't find that Michigan basketball under Ellerbe and Amaker had been hard to root for, and not just for the actual basketball.  The shadow cast by the Martin scandal was just too large; our best player of that era was Tractor Trayler.  Enough said.

So disappointment in this particular basketball team isn't something that I've come to expect after a loss.  I mean, the loss was expected, and I didn't really like those guys very much in the first place. 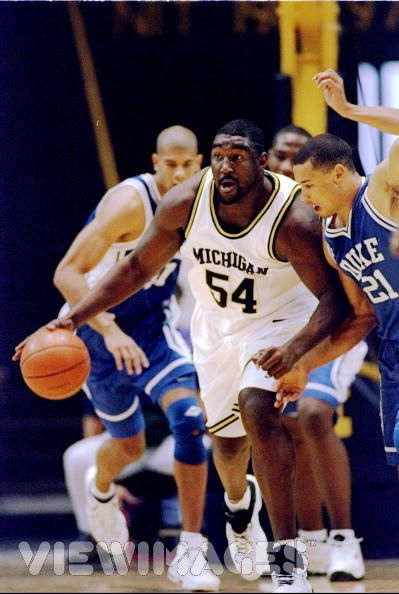 But now?  Now it's different.  Now I kinda like it when Manny Harris goes flying into the lane then looks inquizzled (made up word) when he picks himself up and watches the other team execute a fast break layup. What, no foul?  I like it when Stu Douglass leans into an impossible three and buries it, only to miss the next 3 wide open chances.  I like watching Zack Novak out hustle everyone on the court because it's the only way he's ever played, and the only way he's going to be successful at this level.  I like seeing Michigan leading #1 Uconn at the half, if only because I know at least one player on that Huskies team thought to himself "Holy Shit, they're going to do it again if we let them."

Uconn, of course, didn't let us.  They played flawlessly in the 2nd half, and exploited every exploitable that they could.

And I was dissapointed. 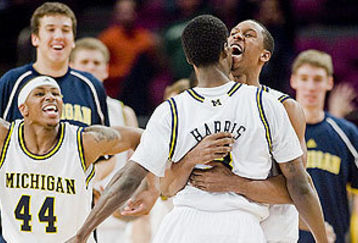 And it felt great.