Share All sharing options for: November 20, 2008 Redux - That feeling all over again...

When the season started those of us who'd watched, suffered through, and intently followed Michigan the prior season, circled the 2K Classic as a chance to see just how much Michigan had grown over the summer. I certainly figured that Michigan would reach the November 20th showdown with UCLA, but I didn't have high hopes for Michigan's chances after watching the Wolverines get dismantled by the Bruins on successive occassions in 2006 and 2007. Michigan was a big name with a little team that the 2K organizers could throw to the Bruins en route to a dream Duke v. UCLA classic final. I knew it. ESPN knew it. Everyone seemed to know it too.

But Michigan never got that memo.

After a stunning victory over then No. 4 UCLA, Johnny put up a short post on RBUAS titled "Burn yourself alive and join the monster squad." Beneath the title sat the photo below... 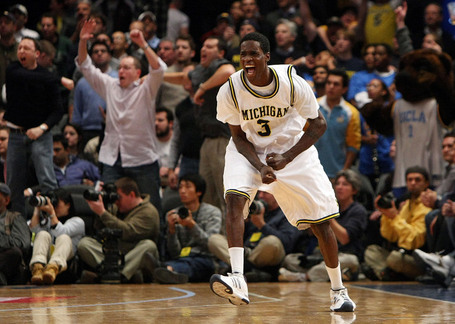 There, somewhat off center, is Manny Harris. Screaming, fists clinched, half into a defiant stomp onto the court, as if he's ready to mash all the doubts we had about this team into a fine powder, just as though he was a two ton Frankenstein grinding his enemies under his heel. And as the crowd erupts behind him, he is oblivious. His eyes are clinched in a guttural yell. The type of soul cleansing, primal yell that comes deep from within and finds its way through to our lungs and throat only few times in our lives. Those moments when a demon is slayed or a burden is lifted. Those moments when we have purged what we were to become something more powerful. That night, and throughout this season Manny has been our monster. Our true to life, invincible monster, risen from what was to be the leader of a tournament team that no one wants to face.

That feeling, etched in every line of Harris's clenched eyes and fists, is what this team has recaptured for us. Not just for one night. But from here forward. We, as Michigan fans, can believe again. Michigan in no longer that child hiding under his sheets. Michigan is the Monster under the bed. The boogie man you thought you out grew. Michigan is back. That November night and that one afternoon in early March gave it back. True those games were different opponents. Different stakes. Different everything. But combined, they have give us that feeling back. That feeling that Michigan is Michigan once more.

So, tonight, when Michigan plays Illinois, accept Johnny's invitation. Whether you RSVP'd in November or waited until March 12, do it. Purge yourself and join the Monster Squad.