Getting to Know You: A Media Look at Clemson Basketball

Share All sharing options for: Getting to Know You: A Media Look at Clemson Basketball

If you're reading this blog, you're probably aware the Michigan will play Clemson in the first round of the 2009 NCAA Men's DI Basketball Tournament, Thursday, March 19, 2009 at 6:10 pm (CST) in Kansas City. You may already know this. But it's been over a decade since I've been able to say or write anything like the above, so I'm taking every chance I get to do so. As a midwestern yankee who has spent very little time in South Carolina, I must confess I did not know much about the Tigers prior to their name popping across from Michigan's in the Tournament Bracket. However, knowledge is power. The more you know of your opponent, the better off you are. So, after a little research here's what I've got for you on Clemson.

Clemson was originally founded in 1889 as a military school. The school became co-educational 1955 and began intergrating its classes in 1963 when Harvey Gantt was admitted. Located in a town that bares its name, Clemson is, for lack of a better word, beautiful. It is also fast becoming one of the country's top public institutions of higher learning after obtaining a US News ranking of 22 in the 2008 report for public universities. Not bad. Oh. And their co-eds are haaaaaaaawwwwwwwwwwwwt. 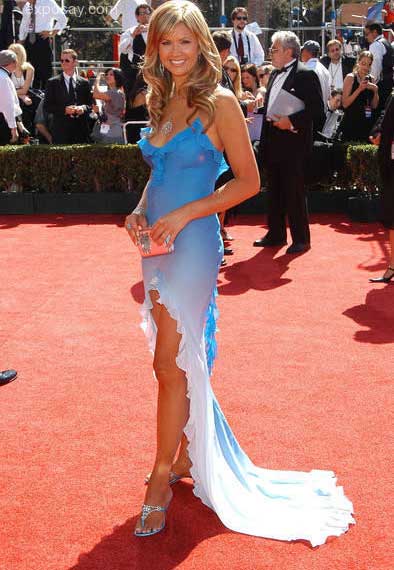 Clemson is a program very much in transition. After ten years out of the NCAA's, the Tigers made the field of 64 65 last year. Unfortunately, they met up with Scottie Reynolds' Villanova Wildcats and got bounced in the first round. Now, a year removed from said NCAA tournament appearance, a lot is expected from this year's team. Especially after a monster start to the season had Clemson fans eyeing a 2 or a 3 seed at the quarter mark of the season.

But things don't seem to be going so well right now. The Myrtle Beach News give perhaps the best wrap up of the good, the bad and the ugly regarding Clemson I've found. I hate copying so much of this, but this is just awesome work. Go there and read the whole thing.

The transition defense has been full of holes as opponents realize their big men can out-hustle Clemson. And the Tigers have been slow in rotating to open 3-point shooters...The backcourt lacks a proven stopper for an opponent's scoring guard...You'd have a hard time finding anyone around the program who doesn't think the Tigers have lost a defensive step, much less their intensity. Four of Clemson's past eight opponents have shot 51 percent or better. Before this stretch, just four of their first 23 opponents had topped 50 percent.

The Tigers aren't generating the same number of press-related turnovers or transition baskets that they were earlier in the season. That has led to greater pressure, not only on their halfcourt defense, but also in their halfcourt offense.

Clemson has scored at least 77 points in four of its past five losses...yet this team is prone to prolonged scoring droughts when continually forced to execute halfcourt sets.

[the] Tigers spare no drama on the routine baseline inbounds pass. For most of the year, this situation has been a turnover waiting to happen...

...During their recent slide, though, freshman point guard Andre Young has been the only reliable producer. Swingman David Potter has been plagued by foul trouble and careless ball-handling; forward Jerai Grant's contributions have depended on the match-up; and before the ACC tourney loss, wing Tanner Smith had recorded as many turnovers the previous six games (14) as points.

Since the ACC tourney, Purnell has held three meetings so everyone could air grievances, and players are convinced those meetings were therapeutic.

Yeah, so the rumors flying rampant that there is some internal strife in the locker room, well, they seem to be well founded. Hell, they even admitted it in the selection show.

After a crappy end to the season, no one seems to know what to expect from the Tigers in the NCAAs. Fight Tigers sums it up pretty well:

It's damn near impossible to predict which Clemson team is going to show up and depending on which one does...it's two completely different results.

However, this doesn't mean they've abandonned hope. Far from it. The Clemson blog The OP, named after head coach Oliver Purnell, did a run down of common opponents and set up a side by side chart of statistics for the two teams. Looking at the numbers you can see why Clemson fans are thinking there's an inherent advatange for the Tigers. However, one number stands out to me that will make or break this game: Turnovers. Clemson is turning the ball over on 20% of it's possessions, and they're at the 15-16 TO mark over their last five games.

The key to Clemson's success will be sophomore point guard Demontez Stitt or freshman Andre Young. Young isn't the scorer that Stitt is, but he's a little more careful with the ball. Stitt has shown the ability to fill the bucket or disappear entirely from teh stat sheet. He's also been turning the ball over more than he's been able to assist on a bucket over the last few games. Stitt stands at 6' 2", so expect CJ Lee on him like glue.

Clemson runs an up-tempo offense that usually feeds off of full-court press turnovers. These guys are far more happy running than setting up in the half court. If they're not forcing turnovers, well, they're in trouble as ClemBenTigerMax points out. If Michigan can take care of the ball, and slow down the pace of the game you have to like the Wolverines' chances.

So there you have it. That's what's out there on the interwebs about the Tigers. Click the links, and search around. If you find something cool, let us know.

We'll have a Q & A up with a Clemson expert tomorrow and a game day preview on Thrusday along with a Live Blog for the Tournament game! More up soon.