Looking Back at Clemson

Share All sharing options for: Looking Back at Clemson 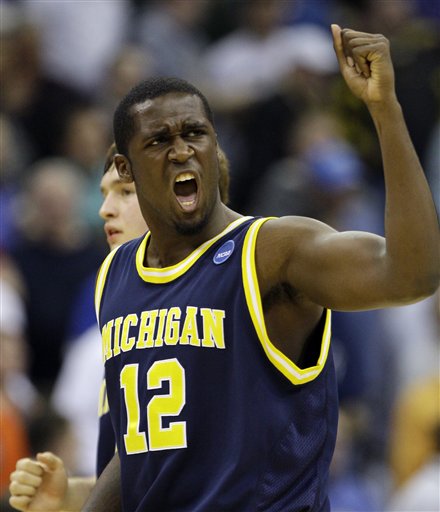 Well, probably not, but that's kind of how I feel after last night gave us a little taste of a fall Saturday in the middle of March, complete with a vintage Lloyd Carr "I can't believe we're letting them come back" moment.  Of course, it also came complete with me sitting in my living room with my arms above my head yelling "yes!  yes!" after the victory was complete  I was angry, defiant, and joyful all in one little 2 hour span, which normally doesn't happen until football season but wait this is March, and that ball is suspiciously round, and holy-crap I care about Basketball again.  Sweet.

I didn't write it, and I didn't say it, but one of my primary concerns about last night's game was the potential for the team to say "we've accomplished our goal; we're here; now we're done."  I trusted Beilein enough to not let that happen, so I didn't mention it and quietly let it fester.  Then Michigan came out and floated two airballs in a row and took exactly 9.67 seconds to cross that 10 second line against the press.  I immediately went into the exact shell that I had trusted Beilein to break.  I was just happy to be there, and content to watch Clemson run us over.  Michigan, on the other hand, decided that they'd better start playing basketball.

And play it they did.  Something I did write (in so many words) was that the key to the game would be which team handled the unique defense they faced better.  Quite simply, Michigan broke the press early and often, while Clemson had a tough time figuring out that 1-3-1.  Booker got his, scoring 18, but  we defended the perimeter very well: Clemson was 5-22 from long range.  It became very apparent in the early going that Michigan was dictating tempo, forcing outside shots, and breaking the press.

It also became clear that Manny was here to play.

He was, without a doubt, the best player on the court last night and consistently made plays when it mattered.  His dribble drive 3 point play with 37 seconds remaining sealed the deal (despite Novak giving everyone a heart-attack), but really his whole game was pretty awesome.  He scored when it was available, he dished when they doubled him, he rebounded, he dunked, he drove, he shot three's, he was unstoppable.  In a game that Sims was frustrated and pressing, Manny looked smooth and confident.  So often, we look for story lines that don't involve the star of the show, but in this case, the star was the show.  The Wolverine Liberation Army's giant cock* proves it.  Also:  Zack Gibson, I take back everything negative I've said about you.  Great minutes last night.  Also also:  Stu, next time maybe just a white-point guard layup.  You frightened me.

The immediate reaction was kind of expected from the Clemsonite's of the internets.  The OP called it "...one of the worst officiated games I have ever seen" which is normally the mantra of the vanquished, but in this case deserves some attention.  Oglesby threw an elbow, that much is for sure, but did he really need to be ejected?  As a team that was on the other end of an "elbow ejection" earlier this year, I can sympathize with that.  I, as well as anybody else in the liveblog (all 4 of us!), didn't think he should have been ejected.  Call it an intentional, and move on.  I get that part of the OP's ref-rage.  But other than that, I thought the game was pretty evenly officiated.  It was a little loose, but still tighter than an average Big Ten game, IMO.  Michigan attempted 15 free throws to Clemson's 14.  All in all; pretty even.  I don't think the ejection is what caused Clemson the game, as Oglesby was having a largely forgettable night. I dunno - you be the judge.  Is this ejectable?  It's at the 49 second mark:

So now we get to play Oklahoma at around 5PM on Saturday.  The Griffin Bros. were in full on destruction mode against Morgan State, and it will be interesting to see how Beilein goes about defending them.  Preview up shortly, but until then, bask in the victory.  It wasn't enough for Michigan just to be here.  It's time to win the weekend.