Share All sharing options for: That Thing With the Ball and the Hoop and the Hopes of Those who Have Stayed

I watch both hockey and soccer on occasion, and with little success.  I am thoroughly entertained by hockey.  I know the players mostly through a fantastic series of video games that started with NHL '95 for the Sega Genesis and hasn't stopped.  I have a fascination with the Buffalo Sabres because their old uni's used to have Michigan colors, or at least the closest I could get playing a 32-bit video game.  I used to go to Fort Wayne Komets games and wonder why my father was looking around nervously every time that guy with the mustache behind us would yell something at the ref.  I didn't understand what was to be nervous about, all he did was yell some jibberish that usually involved some eyeglasses, a mother, and perhaps a cow, alpaca, or some other cloven-hoofed mammal.  It was great fun, and I knew nothing of the game except that they all skated fast and tried to put the puck in the net. 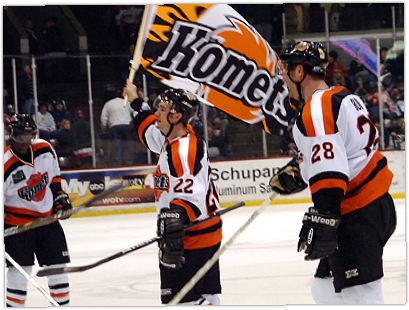 I watched a hockey game this past weekend as a grown-up and realized with a shock...I still don't know what the hell is going on down there!  A bunch of guys skate real fast, and try to put the puck in the net.  The result of the entire evolution of my hockey-watching prowess is that I now understand what that guy was yelling at the ref.  That's why I've not once tried to pen anything related to hockey: I simply don't know the game well enough. (until now! - ed)

Now I've rambled for two paragraphs not really getting anywhere.  Originally, this was going to be a call for patience because, except for an extreme minority of people reading this, we've never experienced college athletics at the D-1 level from a participant's perspective.  But that sounds stupid too, because neither had the Dread Pirate Leach, and that hasn't stopped him from being a whacky college football coach, so I just don't know.  I don't know why Sims decided to jack two ill-advised three's in the waning seconds of a road loss at Wisconsin.  I don't know why Manny drove to the paint, took what was available, and kicked to the open man when it wasn't in the first half, and then lost the handle in the second half.  This team is maddeningly inconsistent, and as much as I'd like to say otherwise, I'm just not informed enough about the game to say, outside of sports cliches, why.

Michigan now sits with one game left, a road trip to Minnesota, and one more chance to make the tournament and end the purgatory that began with Webber and continued with Amaker, and holy shit when is Michigan ever going to make the tournament again?  A win at Minnesota puts Michigan at that magical .500 mark in conference, and with kills of Duke and UCLA on the board, will most likely put us in the big dance.  Bubble teams are falling like mad, and oh look JD Drew is trending towards the DL, and it must be March, which until this season meant that Michigan would be looking to repeat as NIT champions.

Back in November, with Ohio State on the docket for Football, I wrote a post called Risen, which remains one of my favorite things I've written for this site.  I like it not because it's a technical masterpiece, or anything like that.  I like it because I read it now and feel some emotion attached to it.  In that post, I said:

Michigan basketball disappeared after that, buried under sanctions, fallen banners, and Ed Martin.  The beast lay on the hardcourt, content to be ran over, around and through by those who it had once slain.  All was silent.

Then, last night, in front of a half full arena in a place far, far from home, the beast got up.  It picked itself off of the court, and shook off those fallen banners, and the echoes of the past.  And it fought.  For the first time in a long time the beast fought with a tenacious 1-3-1 zone and a freshman guard from Indiana who looked like he had emerged from Hickory High School to take the big stage in New York.  It fought with a point guard named Manny Harris who, when he realized that UCLA was not going to let him score at will, played within the system to find those that the Bruins were content to let go.  It fought with great 2nd half shooting, and forced turnovers, and transition points.  And finally, with 14 seconds left on a backdoor cut by DeShawn Sims - the 6th man off the bench - Michigan basketball roared again.

A lot has happened since then.  A victory over Duke, an overtime head scratcher against IU, and a loss against Iowa.  Unfortunately, I followed the paragraph above with:

I felt kind of silly writing the words, because really who am I to say that Michigan basketball is back?  I suppose what I was trying to convey was that this particular squad doesn't have what it takes to get to the final four.  It didn't have what it took to even be a contender in the Big Ten.  But it does have heart.  And elbows.  But mostly heart.  And now we, as a fanbase, stand one win away from empirical evidence that will support the return of Michigan basketball: an NCAA tournament appearance.  Michigan plays Minnesota Saturday, and it's for all the marbles.  It's for the years of despair, the fallen banners, and a 3-9 football season, and you and me, and Beilein and snow-white Indiana guards and inexplicably loyal Detroit players.  I may not know basketball from an insider's perspective, but I do know that this Michigan team has a chance to do something special this weekend.