The Mt. Rushmore of Michigan

Share All sharing options for: The Mt. Rushmore of Michigan

A camera sweeps down from on high amidst swirling spotlights and music that somehow blends marching band fanfare with urban hiphop.  The letters ESPN fly across the screen with a wooshing noise, each landing on the far left with a metallic clank.  Rick Reilly, our host, sits on an elevated dias with 3 empty chairs.  The backdrop is an empty "Mount Rushmore" waiting to be carved with four Michigan sports heroes.

Hey everyone, thanks for joining me.  Since I came up with the idea of doing a "Mount Rushmore" for each sport, state, college, team, and local community, I thought I'd go ahead and host a weekly segment here on ESPN highlighting and debating some of the best sporting figures from around the globe...

SG:  [from the live audience] I'm glad you came up with the idea

Sorry about that folks, it looks like a blogger's gotten his teeth in a curl!

[trying to yell over the audience's laughter] What does that even mean?!?  Are you guys all idiots?  [security ushers him out]

Joining me today are three of the University of Michigan's finest in athletics to debate who should go on the Mount Rushmore of Michigan.  They are:

[ambling out on stage with an aww shucks grin and down-home accent]  Hey Rick, it's great to fuckin' see your ass, motherfucker.

Whoa, nobody told coach practice is over!

[Walks confidently on the stage, takes a seat, and stares icily into the nearest camera, which isn't the one that is currently live]

He always did lock onto one target...and finally, here's Lloyd Carr, everybody

[Shakes Rick's hand] All the people like us are we, and everyone else is They.

Kipling, right Coach?  That's one of my favorites.  We're here today debate which four sets of beautiful, hard, rock hard smiling teeth should be carved into the Mount Rushmore of Michigan athletics.  Just thinkin' about those smiles, the teeth...let's start with Quarterbacks!

I always prefer to believe the best of everybody, it saves so much trouble.

C'mon coach, give us a name!  All you've done since I've gotten here is quote Kipling.  Lord knows I don't have as much knowledge as you, but I'll go on a limb and say Tom Brady should probably be on there.

[turns and grabs Rich's arm urgently, and whispers] Words are, of course, the most powerful drug used by mankind.

[still looking in the wrong camera] Tom Brady didn't even start his senior year.  Shouldn't the...

[bursting through the doors, stage left] Boom, motherfucker!  Long as you're talking QB's let's talk about the guy with the cannon arm and the junk to match.  [takes long swig of Jack] Put the Mallet up there on that wall.

Kid, look, you weren't even supposed to play your freshman...

Yeah, I was gonna play 'till your gay hick-ass showed up and started milkin' them cows and manure and shit, boom!  Malletted.  [flips out a beeper] a'right, I'm outta here, check you later Michi-fags.  [takes another swig of jack, exits the stage].

Ooookay, I think it's settled then!  The first face up on the Michigan Mt. Rushmore is Ryan Mallet!

[interrupting] Alright, you guys better step up your game, I hope you wore a dental dam from what young Mallet just gave you; tooth joke, what?

Let's take a look at some of the historic coaches that have graced the sideline of Michigan, Rich, any thoughts?

Well, I think a highly underrated coach at Michigan, and a great mentor to me was Don Nehlen who coached quarterbacks under Bo here at Michigan, and later was the head coach at West Virginia, and yet, he was never a head coach, and it'd be pretty hard to leave Bo off any list of head coaches, even with such men as Oosterbaan, Yost, and even this guy sitting next to me, Carr, as competition.

Well, for a guy who doesn't know michigan tradition, you sure seem to have studied up!

Well, I think tradition is important, especially at a school like Michigan, but it's not the only thing.  We need to get our players and....

Yeah, let's put Bo up there.

Not so fast, my friend.  I own your ass.

If any coach is going up there, it's gonna be yours truly.

We have forty million reasons for failure, but not a single excuse.

Ho-ho-hokay!  Jim Tressel, you're the next face up on Michigan's Mt. Rushmore!

But wait, that doesn't even make sense!  You might as well throw Terrelle Pryor and Charlie Weis up there while you're at it! 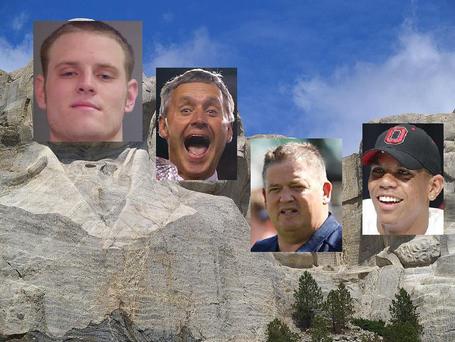 It's clever, but is it Art?

That's for our audience to decide, coach [gets out a pair of binoculars and pretends to gaze up at the Mt. Rushmore] whoa...looks like Jim could use some floss there....