Nevermind Easter, it's Christmas in April

Share All sharing options for: Nevermind Easter, it's Christmas in April

Before I start, I first just want to say thank you.  Thanks to the coaches, the team, the university, the former players, the band, the cheerleaders, and most importantly, the fans, for making Saturday an absolutely awesome event.  One of the things I've always rather silently bemoaned in the past is that Michigan has never made much of an ado about its spring game.  Well that tradition changed for the better this past weekend.  I think nearly 50,000 others will happily agree with me here, all in all the day was a complete success.  I had to get ahold of BB about halfway through just to say "man, this is just an absolute blast".  This event is only going to get bigger if they keep putting together an event like today's, trust me.

For a fanbase that has been waiting for what can only be described as an eternity for some glimmer of football, Saturday was a brief oasis, a minor respite of sunbathed, blue-skyed Maize n' Blue football... the kind of setting that the Big House was made to provide.  I will not attempt to give a detailed X's and O's breakdown here, and really, if you want a humble opinion, to attempt to do so would be a bit of a pointless exercise.  I will however give you one fan's perspective on a few things that caught my eye over the weekend.

First and foremost, the one collective concern of our vehicle as we headed to the stadium was: how will #5 look throwing the football?  The answer to that question was a resounding "really good".  He hit guys in the hands, he hit guys in coverage, he made crisp short throws, he made accurate intermediate throws, and he connected on deep throws.  He demonstrated a quick release.  He threw well on the move, he was nimble enough with a red number on to make a play or two, and all in all put forth a performance that left me feeling exactly the opposite of how I felt about our QB play after last year's Spring game.  I didn't care or focus on his ability to read a defense and I didn't once look to see if he was "locking on" to a receiver, quite frankly, that simply doesn't matter right now.  I was purely and solely cared about Forcier's arm today, and guess what, it looked good.  Darn good in fact.  It's certainly too early to start predicting anything, but considering the enormous amount of hype that has been built around our young freshman QB, he delivered and made that hype seem for the most part entirely justified.  Two big ol' thumbs up to Tate Forcier on Saturday's reps, and heck, throw in a big ol' smile and a small sigh of relief. 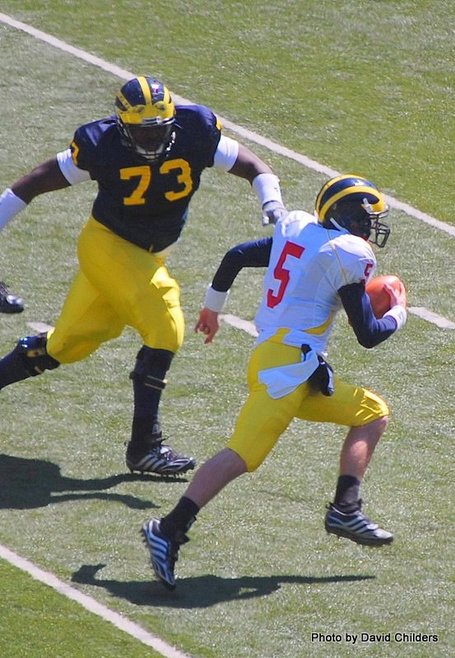 The alumni flag football game was tons of fun.  Not too serious and not too silly either.  There was running commentary from Beckmann and Brandstatter, "sideline interviews" with the players, Rick Leach getting the crowd going, guest referees like James Hall, a few great catches, a tremendous one-handed pick by Larry Foote (who supposedly wasn't supposed to participate thanks to his "employer"), and all in all a great time.  I would expect that you're going to start seeing the participation in that event start to grow and grow in terms of name players.  I can't imagine how much fun it was for the guys out there.  Ali Haji Sheikh and Phillip Brabbs kicking in the Big House again!?  Good times all around.  It was also fantastic to see Ron Bellamy become the Charles Woodson-level player on the field.  Play of the day however goes to this: 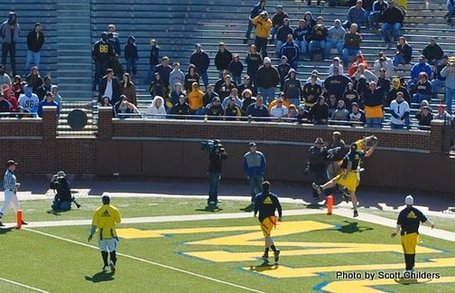 After the game, players slowly began to matriculate onto the field and started going through warm-up drills... and yes to the shock of relatively few, they started pumping some serious MUZAK over the PA system.  See recruits?  We're hip, we're cool!  There were, predictably, a few folks who were crotchety enough to complain about such inane things.  Thankfully, the majority of the crowd didn't seem to care.  After warmups there was a relatively long highlight video (yes, they did manage to procure enough highlights from last year to put together a video, and a few key plays featuring players who are...ahem... no longer here were noticeably absent) and got the crowd ready to get going.  The team then took to the field under the banner and the final spring practice got underway. 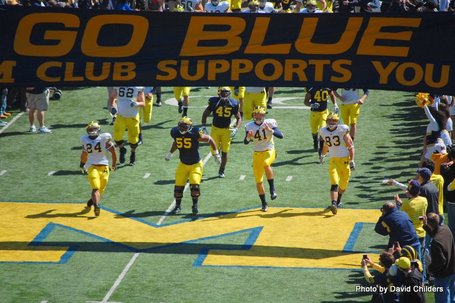 Aside from my beaming Forcier smile that still hasn't subsided, there were a few other guys who caught my eye, in no particular order:

- Vincent Smith - Shifty, shifty, shifty...  I think he's going to find a role in this offense, albeit likely limited this year with the guys in front of him, he's got a lot of talent and I'm sure we'll get him on the field in some capacity this Fall.

- The O-line - Yes all of them... I didn't pay too much attention to the lineups we put out there together, but all in all I thought the line looked solid today... as much as you can tell from this sort of thing anyway.  Very few mistakes of the false start/holding variety too.

- Terrance Robinson / Martavious Odoms - Both guys made a number of good plays in the slot, each has the potential to be the kind of guy that makes opposing fans howl with terror from a simple slant taken to the house.

- Roy Roundtree - CAUGHT THE BALL WITH HIS HANDS!!! YES!!!  Call me crazy, but in this offense I care a heck of a lot more about whether the guy is going to haul the thing in than if he is going to break the sound barrier after he does so.  Roundtree made a number of very solid catches in coverage.

- Denard Robinson -  Didn't even have a uniform on, but he attempted to make his way up the eisle on the pressbox side not but 20 feet from us and was absolutely mobbed by fans shaking his hand, patting him on the back, tacking photos, and getting autographs.  He caused a backup of the rest of the line of recruits/commits trying to go up behind him.  All in all it was quite a scene that distracted those nearby from the action on the field.  You could see by the smile on his face that he was somewhat blown away by the whole ordeal.  It was awesome to witness. 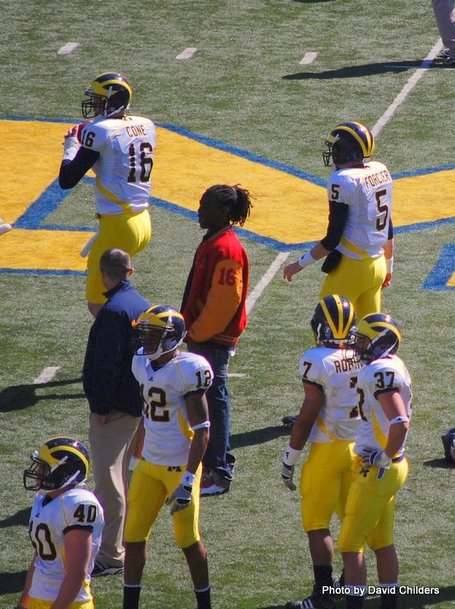 - Carlos Brown - Continues a career of great spring game performances, another huge run today with a number of other very solid carries... is it really too much to ask for this poor kid to remain healthy for the upcoming year... really??

Early concerns.... (because it wouldn't be a Michigan blog if we weren't unreasonably pessimistic about something!)

- Field Goal Kicking... Well of those there today, Brian Wright is the most serviceable option, but even considering the wind there were some.... ugly kicks.

- Either our punt block team is awesome or our punt team has some work to do....

- In that same light: Martavious Odoms caused my stomach to twist into a knot that a Webelos would proud of... naturally he dropped the one punt hit to him during the proceedings.  Eegads.

- Mentioned by many around, but uh Stevie Brown did his best "Brian Urlacher vs Tom Brady" impression in which a defensive player is turned to stone by the stunning agility of a statue-esque QB.

All in all it was a great day and a fun first look at the 2009 squad.  Any other questions or things you'd like to hear about, let me know in the comments.