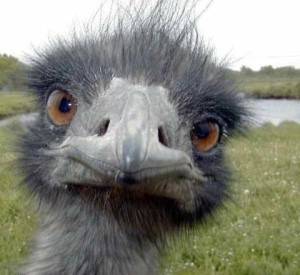 I don't know why, perhaps it was my northern Indiana upbringing, but there is not a team in all of sports that makes me as nauseous as Notre Dame.  As a youth, the local paper would drool over Notre Dame.  It was a joke, in my household, that the paper would find a way to put Notre Dame on the front page during their bye week.  Sure enough, the headline read something to the effect of "Notre Dame LB learns to tie shoes, Weis credited with breakthrough."  More frustrating still was the fact that the Journal Gazette in Fort Wayne, IN was about equidistant from Ann Arbor, and there was nary a mention of the Wolverines unless there was some embarrassing play or loss.  And Ben Smith sucks when he writes about Notre Dame.

So my loathing is deep seeded, and kind of weird, but it exists none the less.  Notre Dame could lose every game on their schedule and I would love it, and that's the only team I can say that about.  Hell, I want Ohio State to be good every year (it'd be nice to beat them someday too...).  Notre Dame?  Not so much.  Which is why it hurts me viscerally to say this, but here goes:  Notre Dame is going to be pretty good this year.

Yeah, I just threw up a little.

First of all, Jimmah(!), if you'll remember, was a great quarterback recruit who was rated higher than Mallet was.  Also, while not exactly fresh and crispy competition, I thought Jimmah took a huge step forward during the Hawaii bowl last year.  Take a look at his stat line for that game:

I understand that this is one game against a Hawaii team that wasn't exactly awesome defensively, but that line is impressive none the less.  This is what Jimmah is capable of when he's not on his ass the entire game.  Remember, Jimmah's freshman year had him playing behind a line that, uh, might have been the worst offensive line I've ever seen and that includes Michigan '08.  This year, his line looks a little more like this:

They return starters at every position except for Paul Duncan, who is a 5th year senior.  The line is full of upper classmen, all of whom have playing experience.  These guys will be able to protect Clausen.  Also, if there is one thing that Weis can do, it's turn out quarterbacks.  Brady Quinn wasn't a good quarterback until Weis showed up.  Tom Brady wasn't a good NFL quarterback until Weis got ahold of him.  There is a track record here of Weis being able to make QB's better, and now that Jimmah has a line that will be able to get him settled in the pocket, he's going to be dangerous.

How good are those upperclassmen?  Well, if recruiting rankings are to be trusted, and it's been more or less proven that they are, they're going to be pretty good.  Here's a ranking of Notre Dame's recruiting classes starting 4 years ago, according to Scout:

They've got talent, and now that talent has experience.

Now we come to Weis.  Largely, I believe his career thus far at Notre Dame has been smoke and mirrors.  The schedules, while looking tough in the preseason, have turned out to be total crap, and I still can't point to a "big game" that he's won.  His "marquee win" was a loss to USC.  But look at the schedule this year:

That's not exactly Murderer's row there.  In fact, aside from an ass beating at the hands of USC, I'm not sure that they lose any of these games.  Notre Dame is primed for at least a 10-win season, and most likely another BCS bowl.  Given their experience, potential greatness at quarterback, and weak schedule, Notre Dame's record is going to be pretty good this year.

The question is, however, how much of this is scheduling smoke and mirrors?  How good in Notre Dame going to actually be?  Well, given the recruiting class rankings of upper classmen, the experience, and the maturity of Jimmah, I think they're going to be actually good for the first time in...well...a long time.  If that offensive line turns out to be as good as they are on paper, I don't expect a Syracusian loss from this squad.  In fact, I see 10 wins and a BCS bowl drubbing similar to Weis's first few seasons.  So it'll be best for you to go ahead and prepare for the media-love onslaught sure to begin with the opening weekend of the season.  I've already built a Holtz-proof bunker in my back yard.