Well, the women's final four is finally complete, and the Masters is right around the corner which means that we've hit the 3rd and longest segment of the off season.  What better time to start banging out some previews?  These are all, of course, assuming that there will be nary an injury or legal problem during the summer.  Also of note:  These previews aren't necessarily Michigan-centric.  We don't play Northwestern this year.  Think of it as fan education. 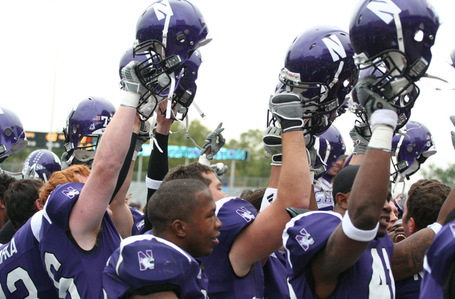 I've always held somewhat of a soft spot for Northwestern, if only because I can't figure out for the life of me what they're doing in the Big Ten.  Nothing makes sense!  They're the smallest, by far, of the Big Ten schools, they're the best (probably) academic institution, and they wear purple.  They are simply out gunned in football and basketball by athletic departments with far more resources and far less stringent academic policies in the Big Ten.  So yeah, I had a soft spot for the little guys until they came into the Big House last year and beat Michigan on the worst day for football ever.  Now?  Not so much, but at least that loss yielded a picture that is awesome.  You may now view its awesomeness: 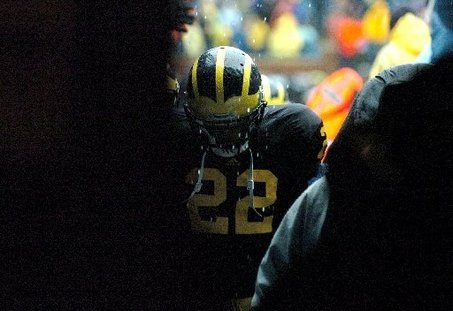 Speaking of last year, Northwestern had a great one, going 9-4 overall and posting a 5-3 conference record.  For the first time in a bajillion years, Northwestern ran through their out of conference schedule unscathed, and somewhere in Illinois, a man calling himself "LTP" spontaneously combusted.  It was, in all, a pretty good time to be wearing purple.  Hell, they even gave Missouri a great fight in the Alamo Bowl, losing 23-30 in OT.  They also had a string of very talented players who aren't wearing purple this year.  Well, maybe not a string.  Maybe just two: C.J. Bacher and Tyrelle Sutton.  Sutton had a mostly injury plagued career at Northwestern, but still managed some impressive numbers as a four year starter:

With Sutton's inability to stay uninjured (whoa - negative's ahoy!), the job of "scoring" came down to C.J. Bacher, who performed admirably, going for 19 and 17 TD's in his junior and senior seasons.  Regardless, both players are gone which means, likely, another 9 wins season will be extremely difficult to achieve.

Northwestern is on that weird rotation that allows them to dodge both Ohio State and Michigan, which until recently would have been a good thing, but my guess is that they'd gladly replace Penn State or Wisconsin with Michigan at home.  This is, actually, not a bad schedule to break in a new backfield with.  Speaking of which, you may remember a young man named Mike Kafka getting some starts last year when Bacher was injured.  He was/is a shifty type, racking up over 300 yards rushing in limited duty.  Think Nick Sheridan except a quarterback.

We'll be back, hopefully, for a part II of this preview with some special guests, so keep your eyes open.