Players We Love to Watch, Even if They Aren't That Good: Renaldo Sagesse

Share All sharing options for: Players We Love to Watch, Even if They Aren't That Good: Renaldo Sagesse

What do Renaldo Sagesse and a French Tank have in common? Everything. 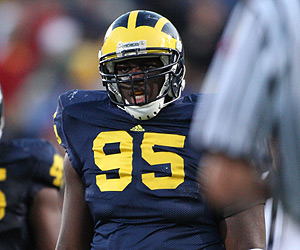 Really? A Canadian? Hellz yeah people. When you're 6'5, 300+, and from a part of the world that is more likely to produce fur traders than Division I defensive linemen, you get love from Maize n Brew.  Big Ro is our man in the middle. Sure he isn't going to supplant Mike Martin or Will Campbell for starting time, but he's going to be a key part of Michigan's success over the next two years as Michigan rebuilds its depth at Defensive Tackle and leans heavily on the big French Canadian.

So why a French tank? Well, for one, he is, you know, well, French. Even if he is French-Canadian. But the main reasons are he's big, mean looking, and doesn't scare anyone yet. But when properly trained and prepared, damn son, he's still a freaking tank.

Mayhaps it's on potential alone that we love this guy. The recruiting services took a small pass on him, rating him at two stars and three stars. But both services said the same thing, he's raw, he's huge, if he can be molded he could be something special. And looking at the dude and seeing his athleticism, you can see why the damning praise of "potential" was affixed to him. He's ginormous. Long arms. The heft. It's also worth noting the fact he looks like Biggie. 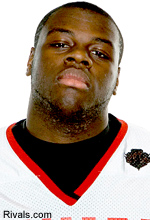 In standard Carr fashion toward the end of his tenure, Sagesse burned his redshirt in the Oregon game during the disastrous start to the 2007 campaign. That said, he did play in six games in 2007, clogging the middle as best he could and generally trying not to get overrun at the point of attack. Big Ro saw basically the same amount of action last year with predictable results when you consider it was only his second year playing real football and he was learning a new system. Put simply, a red shirt REALLY would've helped this guy.

But those are excuses. And excuses don't cut it in Ann Arbor or while hunting mink in northern Quebec. Going into year three Sagesse is an upperclassman. He's was there for the only Michigan bowl win that anyone on the team has experienced. He's experienced the worst loss in program history and one of it's bigger wins. He's still insanely athetically gifted. He's still got potential. He's still Canadian. 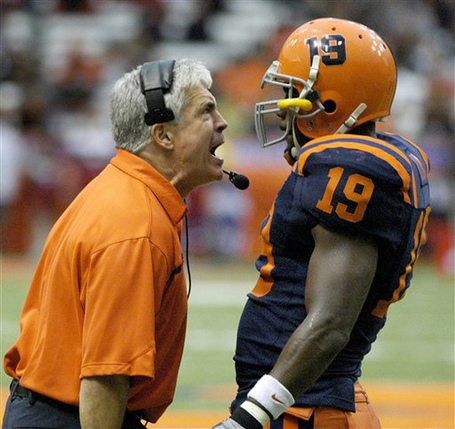 Is Sagesse going be a starter at any time in his career? Probably not. But can he be a valuable member of the defensive line? You bet your ass. He's not a star. He's a cog in the machine. But a vital one. You need guys like Ro to step in, eat some minutes and a double team, and give your horses a rest from time to time. Further, based on DT depth this year, you know Sagesse's going to see plenty of action so you'd better root for him.

Sagesse's got his chance this year. Instead of watching him overpursue or get blown back, we fully expect him to stand his ground and smush fools into submission from time to time. Sure he's not going to go all Alan Branch on quarterbacks, but we saw some improvement last year. With another year of BARWISCRUSH under his belt and a real defensive coordinator, I am hopeful that our Canadian run stuff will finally turn into a serviceable player.

From a "Yea Team!" perspective and from a "you gotta root for him" perspective, Sagesse's one of those uphill battle kinda guys that deserve some extra cheering. Here's this gigantic dude, born/raised in Montreal, propably gets more excited about the prospect of the Montreal Canadians in the playoffs than potentially playing professional football, and is all of a sudden a critical component of a major college football program. It's both scary and kinda fun.

Since he's Canadian assume he's even more agile on skates, so I propose moving his off season work-outs to Yost. Added confort level. Maybe a puck or two on the ice so he feels more at home. Boom. All-American.

But he is a story worth following. He's an underdog that's going to sub in some critical minutes here and there. He's a dude from a strange place in, what is to him, a stranger place. He's a tank. Now all he needs is some direction.

In the words of Biggie Smalls...

Super Nintendo, Sega Genesis
When I was dead broke, man I couldn't picture this