Some Things Go Beyond Fandom, Especially When a Young Man is Diagnosed With Cancer

Share All sharing options for: Some Things Go Beyond Fandom, Especially When a Young Man is Diagnosed With Cancer

Amid the hoots and the hollers, the tailgating, the touchdown dances and the thrill of a Saturday at your alma mater it is easy to forget that College Football is a game. A game that is played, by and large, by kids. While we build them up with phrases like "He's a man," "Man among boys," "Quarterback seeking missile," and the lot; football players are kids. Some barely old enough to order a beer and most too young to entertain the notion.

So, when one of them, any of them, are told they have cancer, they are no longer these destructive entertainers we worship every weekend, but boys who were told their lives will never be the same. And likely during that conversation with a man or woman in a white coat, that boy is told that his life may end before all those youthful hopes and dreams even remotely have the chance to be acted towards, let alone realized. 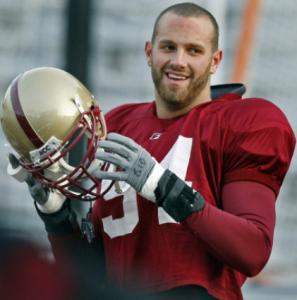 When Dr. Saturday, ney Matt Hinton, reported that All-American Linebacker Mark Herzlich of Boston College has been diagnosed with Ewing's Sarcoma, I got choked up. While I don't know Mark Herzlich from the guy standing next to me on a bus, it doesn't matter. He is a kid with cancer. Cancer before he is able to enter the professional world; whether its football, business, or truck driving is irrelevant, he's never even earned a real paycheck. Instead, he has a condition that threatens to take his life long before it's even truly begun.

Perhaps its the violence of football that leads us to believe these young men are indestructible. They get up after the worst possible hits. They walk away from collisions that would kill lesser individuals. But, at the end of the day, they're human. They're just like us. The same goals. The same fears. The same vulnerabilities. The same needs.

Right now Mark Herzlich is not an All-American, a linebacker, or even a football player. He is a human being who just received some horrible news, and a human being who needs and deserves our support. Not just from Boston College supporters, but from all of us, regardless of allegiances.

Godspeed Mark, we're pulling for you.