Share All sharing options for: Monday Happy Hour is Picking Fights with Dad

We haven't had a happy hour around here in a while so I figured it's time to drop a little knowledge on you. So sit back, grab a frosty one, start humming the Cheers theme, and ogle what's ON TAP:

No, Sadly, a Buckstache Was Not Involved

This just speaks for itself [names and places changed to protect the innocent]:

[MIDDLE OF HELL ON EARTH KNOW AS], Ohio (AP) — An Ohio man who argued with his grown son over a messy bedroom says he overreacted when he called 911.

[Buckstashe Turdburglar] called authorities Thursday after his 28-year-old son — who's a school board member in the [post-apocalyptic wasteland that is Suburban Ohio] — threw a plate of food across the kitchen table and made a fist at him when told to clean his room.

The son, also named [Buckstache], lives in a room in his parents' basement.

The father declined to press charges and told police he doesn't want to ruin his son's political career.

The son, who also works as a political consultant, says he's lucky to be living in the house rent free. He also promises to keep his room clean. (emphasis added).

No word yet whether this is indeed the famed Subcomandante Wayne.  While I'm sure this is just a misunderstanding, the underlined portion just killed me. As someone who's worked in the political arena, I've got news for the Dad: If your son is 28 and living in your basement, his political career is already on life support. Calling the cops on him basically, and mercifully, euthanized what was left of his political aspirations. And, really, if you're throwing food against a wall in your parents' house at 28, you're pretty close to a total system collapse anyway.

Also, before you jump on me for piling on and ruining this kid's career, think real hard about that. I live in Chicago and have seen this on three separate elevator news screens in separate buildings; all before noon today. Hell, the Cleveland papers and the AP stories are using his real name and his PLACE OF WORK. I'm not. And I'm sorry, this is just funny.

Moral of the story, if you are an able-bodied, employed adult, who is living at home for free: keep your damn room clean.

Speaking of cleaning up...

The Michigan Men's Lacrosse team overcame an 8-3 deficit to capture its second straight Collegiate Lacrosse Association (MCLA) National Championship in Denver, Colorado with a 12-11 win over Chapman University.  Sophomore Trevor Yealy scored the game winner with nine minutes left in the fourth, putting the Wolverines up 12-10. Champman managed one more goal to cut the lead in half, but the Wolverines held firm to capture the title. Props to David Rogers and Kevin Zorovich who scored 3 goals a piece, and to goalie Andrew Fowler who recorded 15 saves in the win. Go Blue! More photos here. 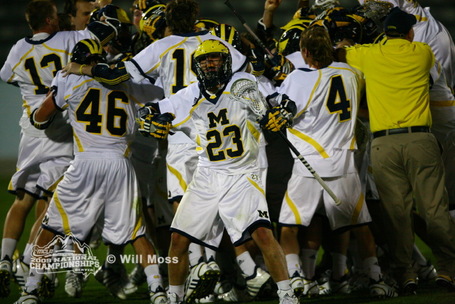 Photo Awesomeness Courtesy of Will Moss, via mcla.us

Michigan Softball Moves on to Super Regionals, will Face Baylor

On the ladies' side of the athletic equation, Michigan's perenially awesome softball team claimed yet another Regional Crown with a 4-0 win over Notre Dame this weekend. Up next? Baylor. Michigan hosts the Bears this coming weekend at the Wilpon Softball Complex, tickets go on sale Tuesday (May 19) at 8:30 a.m. Admission for each day of the event is $10 for reserved grandstand chairback seating, $9 for reserved grandstand bleacher seats, $7 for outfield bleachers and $5 for students and seniors.

Get out there and support the team. This is their SIXTH STRAIGHT REGIONAL CROWN! And remember, it's sweet revenge time. Baylor eliminated Michigan two games to one when they last met in Waco for the 2007 Super Regional. So all the support you can give will go a long way towards guiding these young women to the College World Series in Oklahoma City! 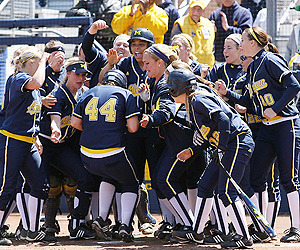 Well, the run had to end somewhere. After two straight amazing seasons in a row, the Michigan Baseball team came up a little short this year. Unfortunately, the team simply ran out of gas at the end, coming up short twice against Northwestern and missing the Big Ten Tournamnet where only the top six teams qualify.

Tough luck guys. We're still behind you and we'll be ready for another big run next season.

I know that's hokey, but there's little else you can say. Brian Griese and Steve Hutchinson's Golf Outing raised a mouth droppping $650,000 for Mott Children's Hospital. That brings its three year total to more than $1.3 million.

Special mention must be made of the contribution Charles Woodson made over the weekend. Woodson donated $120,000 of his own money to the cause. Oh Chucky, 12 years later we still love you.

Special props to Brian and Steve, who's spirit and generosity made this all possible.

Out the Door? Yes and Dunno.

Of the Michigan news that's hit the screen over the last few days, there is some not-so-positive news to report. Reserve guard Kurt Wermers is no longer with the program. Brian at MGo has the break down of the effect of his departure (spoiler alert: None).

Secondly, and unfortunately, Kevin Grady violated his probation stemming from last year's drunk driving conviction and spent seven days in jail. That's not good. I wish Kevin all the luck in the world as he gets his life in gear, but it does not appear he will be with the team much longer. Link ibid.

It's Never Too Early For Season Predctions

Of note, Michigan State at 10-2? No way. No. Freaking. Way. Angelique has MSU going 5-1 in games against Notre Dame, Michigan, Wisconsin, Northwestern, Illinois, and Iowa? No chance. No Ringer. No Hoyer. No line. Not going to happen. I've got them for losses at Minnesota and to Illinois. Plus, Northwestern and Notre Dame are tossups, as is the Michigan game. They split most likely, but best case there is 4-2. And that ain't going to happen.